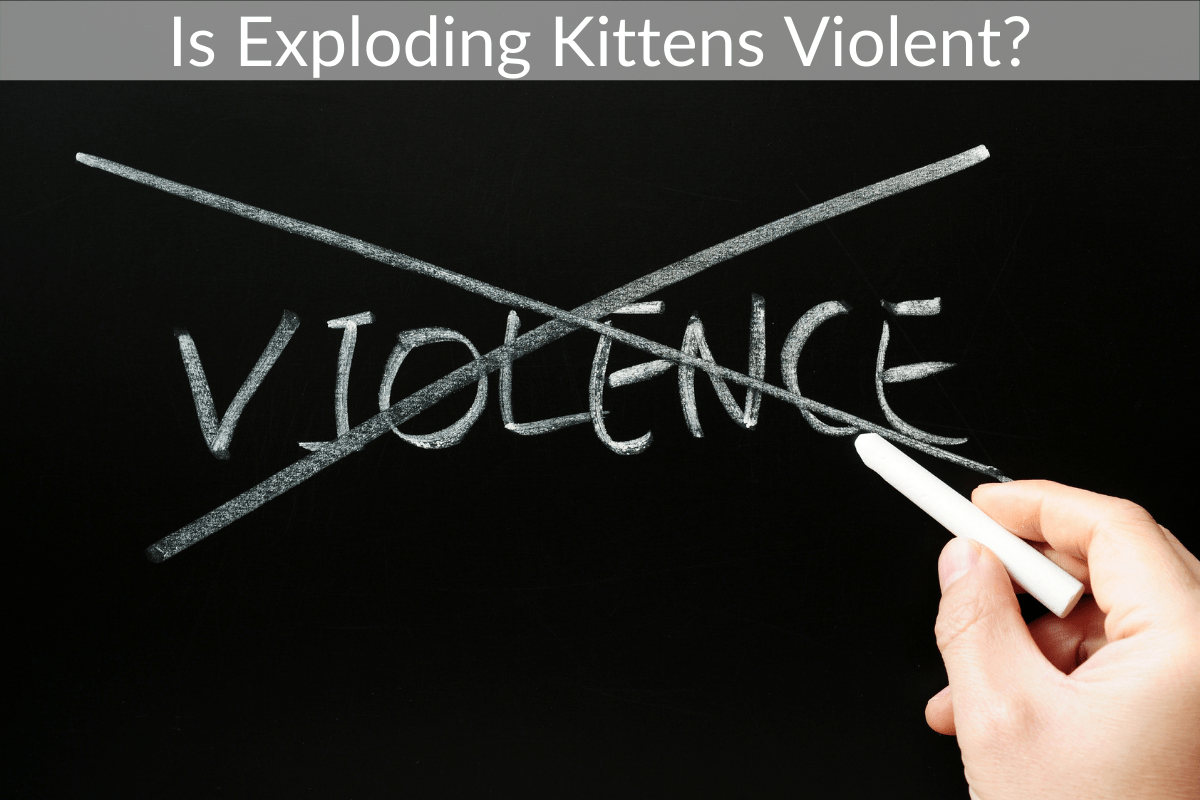 You know you’re living in an amazing era when all of a sudden, there are so many new board games, table-top games, and card games to play.

Especially with the advent of the digital age, the table-top game has struggled to be more relevant and interesting so that they don’t lose business.

So there are so many new games today trying to make an impact — to the point that some of them become controversial.

One of those that is a bit controversial is Exploding Kittens. The title itself has come as a shock for parents, thinking that the game is violent and not for their children.

The game, however, is meant to be for players ages 7 and above but is it at all violent?

Despite the title, Exploding Kittens is not a violent game at all and no animals are harmed or depicted as such. All of the cards in the game are different cats and the Exploding Kitten card is simply a cat carrying a bomb that will knock you out of the game if you don’t have a defuse card.

There are no actual explosions in the gameplay and the images on the cards are entirely non-violent as well. The game involves drawing cards that may or may not be the Exploding Kitten card.

If you draw the Exploding Kitten card and don’t have a defuse card in your hand then you “blow up” and are out of the game.

The last player who remains “alive” without being “blown up” by an Exploding Kitten card is the winner of the game!

To see the most popular versions of the game (yes there is more than one) you can click here.

How To Play Exploding Kittens

Exploding Kittens is a card game that was released in the year 2015. Since its launch, it has generated a lot of hype, considered as one of the most exciting table-top/cars games of the modern era.

The gist of the game involves the players playing cards to try and avoid drawing the Exploding Kitten.

One major difference from other card games is that you don’t have to play a single card on your turn however you do have to draw.

When you draw your turn is then over unless you drew an Exploding Kitten which in that case you have to play a defuse card from your hand or if you don’t have one then you are out of the game.

It sounds fairly simple, but there are many cards that give the players certain advantages throughout the game so if you have them then you can stay alive longer when the game gets down to only a few cards left in the draw pile with most of them being Exploding Kittens.

There are also additional cards that have been added in different explanation packs such as Targeted Attack, Alter The Future, Imploding Kitten, Draw From The Bottom, etc.

Further, players can create combos that will maximize the powers of each card. Some of the combos that can be done in the game include:

The combos are all about sacrifice. The players determine what they’re willing to give up to try and get a new card that is potentially more powerful than what they have in their hands.

With these different cards on the deck corresponding to several different actions that players can take, the Exploding Kittens game can be very exciting.

Exploding Kittens is almost purely a game of luck but there is some skill involved as well since you need to know the right time to be passive and then when to be aggressive as well.

You draw a card, not knowing what you’ll get, but it can increase or decrease your chances of winning. However, the further into the game you get the more strategy comes into play as if you start using your cards too late you will lose the game but if you start too early the same fate awaits you.

The main strategy that comes into play is when the players are given the chance to think of how to use their cards wisely to defeat the others and emerge victorious.

It’s a fun and interactive way to bond with other players, and is sure to bring joy and excitement to a reunion, meeting, or get together.

As can be seen from the gameplay itself, violence is actually not a part of the game. No kittens get hurt in the actual gameplay and are not depicted that way either, nor will the players be required to take literal or figurative violent actions.

Despite the fact that there are no actual explosions involved in the game, many parents are still concerned about the whole concept of Exploding Kittens.

The title is even further aggravated by marketing campaigns. The ad written on the box says that it’s a card game for people who are into kittens and explosions.

The company behind Exploding Kittens did defend the game, saying that a glimpse at the gameplay would reveal that there are no violent connotations in the card game at all.

However, the main criticism the game faced was its name, which was seen as very inappropriate for a children’s game.

Exploding Kittens was targeted and criticized for promoting animal cruelty — which is a pressing issue today and cats are on of the most prone animals to this terrible act.

Although the name of the game can cause frustration and give rise to the misconception that it’s violent, looking at the gameplay would prove otherwise.

The game is more about cats exploding other things and not the kittens actually exploding themselves. The title was merely meant for the card game to be more interesting, attractive, and mischievous.

There’s some controversy surrounding the Exploding Kittens card game. But there is no violence involved, nor actual kitten explosions.

It doesn’t even promote the concept of violence or require the players to take literal or even figurative violent actions so that is not something that you have to worry about.