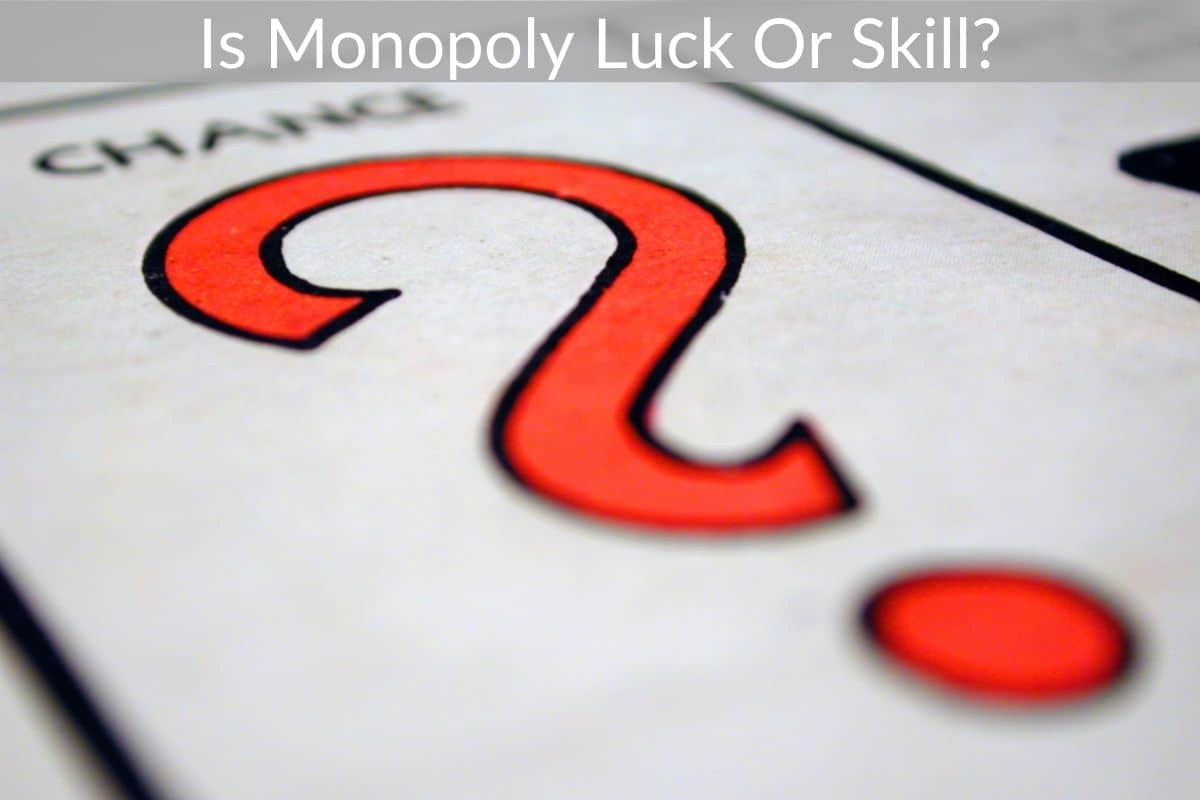 Monopoly is among the most popular board games available today. It has been available for purchase since the 1930’s, and has continued to be a very popular game since its release.

From the very earliest days of its release, it is very likely that the debate of the winner being lucky or skilled has been a common theme, but which side of the argument has more validity?

There is both luck and skill/strategy involved in winning at Monopoly. You have to be lucky enough to land in the properties you need to buy but also have enough skill to trade properties and know when a trade is profitable.

In Monopoly players move around a board based on a dice roll. Due to this, the randomness (or luck) involved in Monopoly is very high.

Dice rolling is one of the most random forms of movement used in games. When compared to cards or spinners, there is a higher percentage of randomness for each number combination.

Since Monopoly uses dice for every turn in the game, this means there is a very high amount of luck needed to go to a specific property or avoid it.

Ways to mitigate the amount of luck required with dice rolling is the strategy, or skill, that a player is capable of using. Whether it be understanding the most common dice combinations or what properties have the highest probability of being landed on, knowing a few things about the game could give the edge in regards to a skill level.

The truth is every game takes a little luck and a little skill. If you are able to collect all three of the orange properties, you might be considered lucky; however, knowing that these are the most commonly landed on properties would suggest skill when they are purchased, traded for, or upgraded.

If you are new to the game, winning is very likely going to be about the luck of the dice, but if you are playing someone that has played more than a handful of games and come away victorious, skill has to be involved.

One skill that cannot be overlooked when judging one’s ability to play Monopoly would be people skills. There is a lot of negotiation and bridge building that happens during a game of Monopoly. Without the help of others, you are likely not going to walk away from a game victorious.

The trick is you have to convince them to help you. This often means negotiating deals or making promises that seem advantageous to other players while actually giving you the advantage.

When making these deals, you have to provide win-win situations, or at least disguise deals as win-win even if it gives you a major advantage going forward.

If you would like to see all of the different editions and spin-offs of Monopoly currently available you can click here.

What Is The Best Strategy To Win Monopoly?

Whether you believe Monopoly is more a game of luck or skill, using some strategy will always increase your chances of winning the game.

Some of the different strategies involve which properties to collect, which ones to avoid, and when to improve your properties. Often, strategies can be combined, but most importantly, strategies should be flexible.

When considering the different strategies in Monopoly, we will look at the following areas: what to purchase, what to trade for, when to upgrade properties and how you should do so.

The best strategies for Monopoly are going to involve two things: getting a monopoly and preventing a monopoly. If giving a monopoly is required for you to get one then the strategy is choosing the right monopoly to get and give.

The name of the game being Monopoly, it is obvious that the goal is to monopolize the board. Within the game, you can monopolize color groups.

The first strategy is to do whatever is necessary to get the orange property set. The second strategy is to prevent our opponents from completing a color set.

From this location, players have nearly a 39% chance of landing on one of the orange properties.

If you aren’t able to collect the orange property set, the next two to work toward are the light purple and red. Though they won’t have quite as high of a probability to be landed on as the orange property, the other 61% of rolls have to go somewhere.

You will also want to work on getting the railroads.

Railroads provide very consistent income in the game. They can be strong bargaining chips for trades and can also fund your property improvements.

Your first property set should be on sides 1 or 2 of the board. These properties are more commonly landed on and cost less to upgrade. Don’t be afraid of trading away a property on side 3 or 4 if you are able to complete a set on side 1 or 2.

Once you have your first set, improve it to 3 houses as quickly as possible, with a caveat. Three houses on a property is the sweet spot for Monopoly. It provides the highest ratio of return on investment. The times to wait on improving properties are: if your opponents just passed your properties and if you are coming up to your opponents improved properties.

If your opponents just passed your properties, it could take too long to see a return on your investment. If you improve properties and then land on an opponent’s hotel, you could potentially have to sell your houses, at half price, to pay rent.

One last thing to remember, in the early portion of the game, it is a race to acquire properties. If you go to jail early, pay the $50 fine as soon as you can. However, once the property race is over and opponents start improving their properties, jail is a good thing. You can collect rent in jail, so if you aren’t landing on properties you are essentially protected from all the negative possibilities.

What Property Is Landed On The Most In Monopoly?

In Monopoly, we always want to try and own the properties that are landed on by our opponents the most often. If you are wondering what properties have the highest likelihood of being landed on, you have to first look at what spot on the board is going to be visited the most.

Jail is the single most visited spot on the board as you can get to this spot in more ways than any other location on the board.

You can roll dice and land on jail, you can land on a spot on the board and get sent there, you can draw a card and be directed there, and if you roll doubles three times there is a penalty that lands you there. In addition, many strategies involve getting to and staying in jail.

Based on the statistical probability of each number combination, Illinois Avenue is the most landed on property in the game. It is 14 spots from Jail. It can be landed on by multiple combinations from that spot, and there is also a Chance card that sends players to it.

Whether you believe Monopoly is a game of skill or luck will depend on your personal experience.

Watching masters of the game, you can clearly see that skill plays a very big part in who walks away the winner.