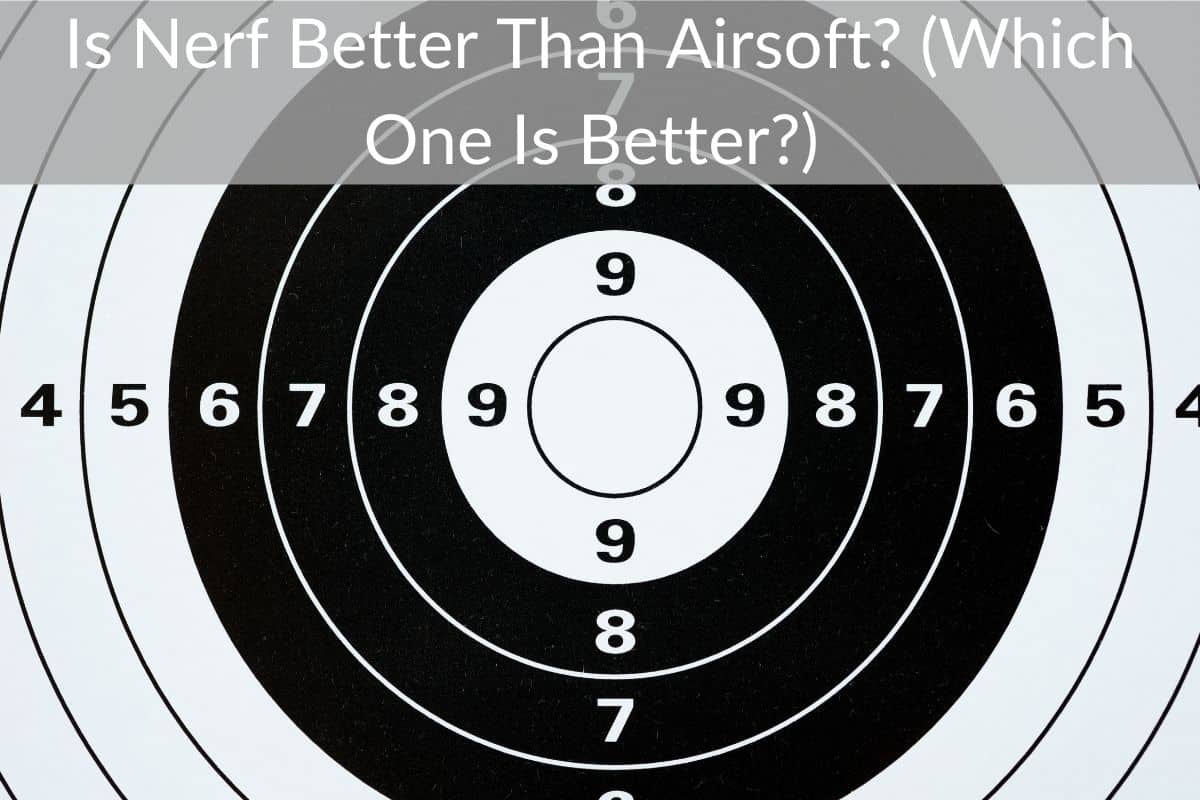 Nerf guns are everywhere. In fact, the name Nerf has become synonymous for any toy gun with foam darts.

The Nerf name was established in 1970 when they created the first indoor safe foam ball. Parker Brothers claimed that this ball could be thrown indoors and wouldn’t break any lamps or windows. They also said it wouldn’t hurt babies or old people.

Their clever advertising helped them to sell four million balls by the end of that first year!

They went on to create other Nerf balls but eventually Nerf became a Hasbro toy when the company came into control of the line.

Nerf branched out from foam balls to foam dart blasters. There are several different lines of Nerf toys.

Nerf blasters do not have the appearance of real guns while airsoft guns look much more like real guns. Airsoft guns are also much more dangerous than Nerf guns since they can put out an eye or break windows where Nerf cannot.

In regards to whether a Nerf gun or airsoft gun is better it really comes down to how you want to use them.

Nerf guns are better for indoor play and for younger children while an airsoft gun is better for target practice or learning how to properly handle a gun.

Airsoft guns do have the appearance of real guns but they fire small plastic balls. Although these airsoft bullets are much more dangerous than Nerf darts they still aren’t extremely dangerous.

When it comes to these airsoft guns there is a major concern over the safety of them. The balls can travel up to seven hundred feet per second which will cause it to break the skin if the proper protective gear is not worn during use. There is also concern over the realistic design of Airsoft guns.

Some jurisdictions require the muzzle of the gun to be orange but even with those orange tips it can be hard to distinguish the difference between a real gun and an airsoft gun.

There have been at least seven police shootings on record that have involved airsoft guns. Of those seven reports on file at least five of the victims were under the age of eighteen.

The youngest was a twelve-year-old boy who was shot on the playground because the police did not know that he had a toy gun!

Airsoft guns can shoot over a hundred yards and still hit the target that you were aiming for while Nerf guns are a short-range toy gun. Nerf is a better choice for your toy gun battles and honestly a better choice for any child under the age of 16.

Which Hurts More, Airsoft Or Nerf?

Nerf and Airsoft make two very different toy guns. Nerf uses foam darts while Airsoft guns shoot plastic pellets sometimes referred to as BBs. Nerf darts have long been advertised as a toy that can be played with indoors and is even safe to use around babies.

If you were to get shot by an airsoft or Nerf gun the airsoft pellet would hurt a lot more than the Nerf dart would. Not only do airsoft guns fire faster but their pellets are much harder as well.

Without the proper protection the hard plastic pellets of an airsoft gun can even break the skin. Which is why it is not recommended to use these guns in enclosed spaces or in an area where anything other than your target can be hit.

The hard plastic pellets fired from an Airsoft gun hurt more than the soft foam darts from a Nerf blaster because of the type of material and the speed of which the guns shoot.

Why Is Nerf Better Than Airsoft?

Airsoft guns are only intended to be used outdoors where there is no chance of hitting something other than your intended target. Airsoft pellets travel at a much faster speed than Nerf darts which means the little plastic pellets from an airsoft gun can cause a lot of damage, breaking the skin of a person who is struck with one or even breaking a window, TV, etc.

Nerf guns can be used outdoors and indoors without the worry that they will cause any damage to anyone or anything. They are also able to be used by kids at a much younger age than airsoft.

Since the Nerf darts won’t cause any damage and can safely be used inside you can have a Nerf war any time!

Is it a beautiful summer day? Then you can have an outside Nerf war.

Did you get a new Nerf blaster for Christmas? You can use it in the house on Christmas morning and wouldn’t even need to worry about breaking any decorations!

Nerf darts are easy to see and therefore easier to find after you have fired them. The brightly colored foam darts are larger than the airsoft plastic pellets and will be easier for you to see when hunting down your dispensed ammunition.

Nerf blasters are a short-range toy gun but because Nerf darts do not travel as far as airsoft BBs you will be forced to play a more close-range game.

With a close-range game you will be getting a lot more action. You’ll have to strategize more; you will have to run and dodge the darts. You will even get a chance to practice your stealthy moves as you might need to sneak as close as possible to your target to eliminate them from the Nerf war.

With Nerf blasters you can pick up a single shot blaster for around ten dollars or you can spend around thirty dollars to get a Nerf Adventure Force V-Twin Motorized Gatling Belt Dart Blaster which will hold up to sixty darts at a time!

There is a large range of Nerf blasters to choose from with a budget for everyone. Even if you don’t have a lot of extra money to spend you can still enjoy a good Nerf war with your friends.

Which Nerf Guns Are The Most Accurate?

There are several Nerf blasters that are fairly accurate but I’ll mention two here.

The two most accurate Nerf guns are the Nerf N-Strike Elite Strongarm and the Nerf Elite Titan CS-50. Both of these are designed to make your shot as accurate as possible in your next Nerf war.

The Nerf N-Strike Elite Strongarm is a revolver style blaster which only holds six darts but has a seventy-five foot range. It also includes a tactical rail so that you can upgrade your weapon later if you wish.

The Nerf Elite Titan CS-50 is a motorized canon that holds fifty darts! It has a shoulder strap so that you can wear it though younger kids might have a little trouble handling it because of its large size.

Don’t forget to grab some D batteries to power this Nerf gun.

Nerf and airsoft toy guns are made for two very different purposes. Airsoft replica guns are more used for outdoor airsoft sports and they probably shouldn’t be handled by young children since they can cause damage if not used properly.

Nerf blasters are safe for the very young to the very old. One of my son’s favorite TikTokers is a grandma who is always ambushing her grandson with Nerf blasters.

They’re safe and fun for almost anyone!