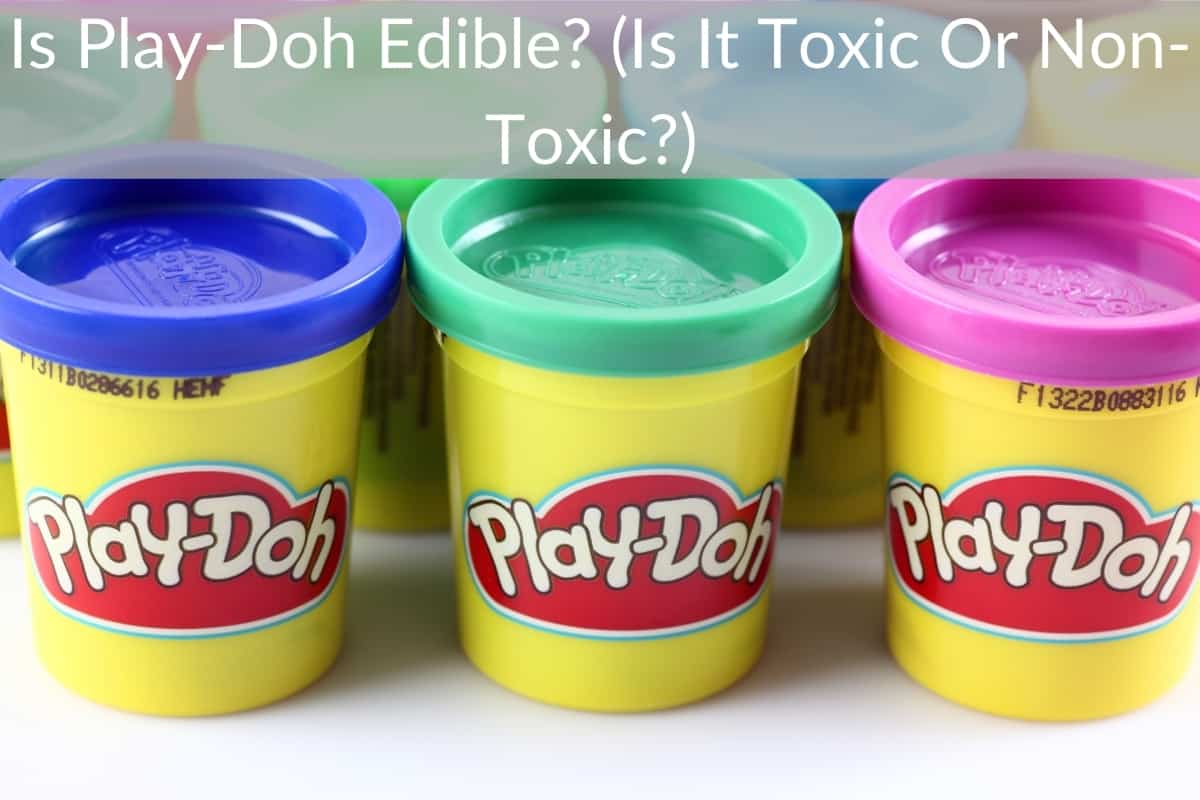 Available in bright yellow containers, Play-Doh is a figment from the best of nostalgia: the salty smell, the popping colors and the endless possibilities.

This moldable dough has been used by parents and kids for more than 60 years to create all sorts of handmade creations.

While all play and games have their fair share of risks, we need to be extra careful with our kids. All children enjoy experimenting with everything with their mouths, including Play-Doh.

Play-Doh is made primarily of water, salt, and flour so although it won’t taste good if a child eats some Play-Dog it shouldn’t harm them.

Because of the bad flavor of Play-Doh it is unlikely that a child will continue to eat it in large quantities simply because it doesn’t taste good.

So although Play-Doh is technically edible and isn’t toxic for someone to accidentally ingest it really isn’t edible in regards to wanting to eat it since it tastes so bad.

To see the most popular Play-Doh sets currently on the market just click here.

What Is Play Doh Made Of?

According to the Play-Doh website, the recipe for Play-Doh contains primarily wheat flour, salt, and water. However the exact recipe has been a secret till date.

According to its 2004 patent, it contains a lot of chemicals including a retrograde inhibitor, a hardener, a humectant and some preservatives. It also contains mineral oil and a petroleum additive for a smooth feel.

To make it appealing to everyone, fragrance and coloring are added and to prevent mold it has added Borax.

Despite all of these ingredients, the producer, Hasbro, maintains that Play-Doh is not toxic. So, other than salt or sodium intolerance, there should not be any major concern if a child accidentally ingest Play-Doh.

Is It Okay If A Kid Eats Play-Doh?

When a child uses Play-Dog, it should be explained that this is not food. When put in the mouth, it can pose a choking hazard (although that’s rare), but swallowing it is unlikely to cause any major problem. Ingestion of large amounts may result in minor upset stomach or loose stools, if they are not sodium intolerant.

In very rare cases, there have been instances of sodium poisoning, although not very severe.

Try not to panic if you find out that your child has eaten some Play-Doh.

First, get the Play-Doh away from them. Then, wipe their mouths with a soft, wet cloth and get them some water to drink. If any problem persists, contact a doctor or any poison control center.

Even though Play-Doh is non- toxic, it can pose serious medical emergencies in rare cases. However, in most cases, eating Play-Dog will only result in an upset stomach and maybe some pain in the abdomen.

However, it can be a choking hazard if your child accidentally swallows a large chunk of it or swallows some that has hardened.

In addition, the product’s salt content makes it particularly dangerous for pets and for people with Sodium sensitivity.

Play-Doh contains several other chemicals, which are better to avoid for your child as well as your pets so despite it being non-toxic it is best to make sure your children don’t eat it.

You can use Play-Doh to keep your toddler entertained as you do chores around the house, as well as to stimulate many aspects of child development.

Perhaps most obviously, it helps small children strengthen the muscles in their hands through squishing, rolling, and shaping the dough.

These actions prepare them for writing with a pencil, cutting with scissors, or making arts and crafts later on.

They can also use this to develop their eye-hand coordination.

Furthermore, children can create food, animals, or other objects from Play-Doh to further use their imaginations. Squeezing and flattening dough can also help children develop healthy emotional development, since it is a calming activity that allows them to use anger or agitated energy in a safe way.

Is Play-Doh Safe For 2 Year Olds?

Due to the possible risks associated with Play-Doh, it is not suitable for children below the age of two years.

Once your child has reached the age of two, you can give them Play-Doh to play with, albeit with adult supervision. However, remember, if your child tries to eat the Play-Doh and does not follow your instructions, you should stop its use and reintroduce it again after a few months.

Play-Doh is made of wheat, salt, water, and other ingredients so if your toddler is allergic to any of these, don’t let them play with Play-Doh.

As for other harder modelling clays, don’t let your child play with it until they are at least 5 years old.

What Happens If A Dog Eats Play-Doh?

Play-Doh is non-toxic, but dogs have a problem with its salt content and salt poisoning can be deadly for dogs.

Additionally, if enough of it is eaten, Play-Doh can also cause an intestinal blockage, which itself is a major medical emergency.

Play-Doh can be particularly toxic to dogs if they have eaten a lot of it.

Your dog may show one or more of the below mentioned symptoms if it is experiencing salt poisoning:

Dogs with salt poisoning are at a great risk of serious health problems. This can damage the kidneys, result in a coma and even lead to death.

The salt in homemade Play-Doh is normally higher than that in commercial versions, which can cause serious issues for kids as well as pets.

Since 2014, UK’s National Poisons Information Service has been giving warnings regarding the use of homemade Play-Doh. Kids suffering from salt poisoning typically experience thirst, tiredness, vomiting, irritability, headaches and nausea.

In general, homemade Play-Doh is safe to use but not safe to eat so as long as your children are old enough that they won’t eat it then you can have them play with your homemade Play-Doh without worrying about it.

If your child is not allergic to sodium and high salt content, don’t let the small risks stop you from giving your child Play-Doh to have fun with. If they play with Play-Doh and love it, it will likely be one of their favorite memories once they grow up.

Moreover, the learning process and experience with Play-Doh will be helpful for them in growing as a confident and mentally well developed kid.

Although Play-Dog is not edible, it will not cause any major harm if your child plays with it under adult supervision and even accidentally swallows a small amount of it.

So go and have fun with your kid playing with Play-Doh.