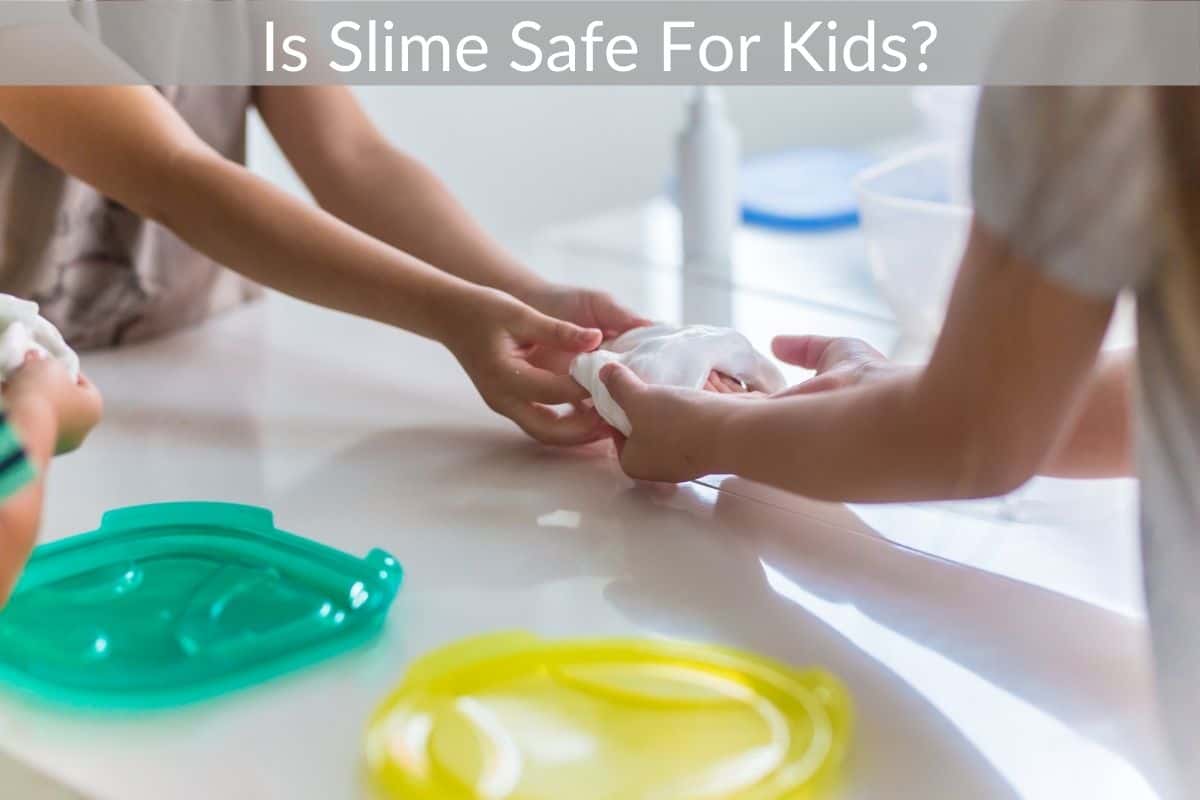 Slime?! What is that?! That weird, flubbery stuff that you found your kid playing with; it seems a bit weird for them to be swinging it around and sticking it to the walls and all over the place.

You may not like it and you may even feel that it is not safe for them. They could choke on it, swallow it, or even get it stuck in your carpet.

What would happen to them if any of these were to happen?

Even if one of these incidents were to occur, there is nothing for you to worry about.

Slime is perfectly safe for your little child to be playing with. Slime doesn’t have any harsh ingredients in it, so if they were to swallow a tiny bit of it, they wouldn’t be in any real danger.

The only thing that could be bad for them is if they were to get it stuck in mom’s new carpet and she were to ground them for the rest of their lives, but that is probably unlikely as well.

To sum it up, slime is perfectly safe for most kids to play with. Other than some rare skin sensitivities that some kids may have, the slime can do little to no harm to children.

To see the most popular slime sets just click here.

If you are a parent, you most likely have worried if your kids’ toy slime is toxic; because, most likely, they have consumed a bit of slime from time to time.

Should you worry if it’s toxic and hurting their bodies or are you in the clear?

It has been found that some slimes can be hazardous to your child and their health but only if ingested in large amounts. Some slimes contain “dangerously high” levels of boron, a mineral often used in a variety of industrial and consumer products including detergents and fertilizers.

Boron is a known irritant that can affect the skin, eyes, nose, and throat. If enough is swallowed, it can lead to vomiting and other stomach problems for your children.

The point being, watch the ingredients when you make or purchase slime for your children and definitely keep an eye on them while they are playing around with it.

All in all though, your child should be safe playing with most slimes.

How Do You Clean Up Slime?

It’s pretty much inevitable, if your kids are playing with slime, it’s going to get stuck in the carpet, in someone’s hair, or on some clothing. Slime can make a big mess, but it is possible to clean it up.

Each situation has a different solution, every material has a different thing that will clean it best. You want to use the most effective solution so that there is no collateral damage to the  item that you are cleaning.

The best thing that will clean almost any slime mess is white vinegar. This has multiple perks—you probably already have some lying around the house, it has a smell that is not too appealing so it can help condition your kids to not get slime everywhere, and it won’t leave a color stain.

If the slime has dried already, pour the vinegar on it and let it sit until the slime softens.

Then you can remove the slime and clean the piece of clothing, carpet or furniture that was affected. Another item that is good for cleaning slime is rubbing alcohol.

You may also have this in your house; but most people swear by using vinegar to get slime out of anything.

Where Did Slime Come From Anyway?

It seems like virtually all kids love playing with slime and making it stick to everything around the house. But why is it so fun? And where did it even come from?

The Mattel Toy Company is the original creator of the famous slime that everyone knows and loves. In 1976 the company wanted a toy to be as gross as possible, thus came the light green slime that came in a little plastic, green trash can.

How To Make Homemade Slime.

To be safe, you may want to make your own slime at home instead of buying it from a manufacturer. Afterall, they don’t know about your kid’s allergies or conditions,

and to be honest, they may not care even if they knew.

So the best solution for some people is to make your own slime. This can also save you money and a trip all the way to the store.

The process is fairly easy and can be a fun family activity.

Before making slime, there are several things that you will need to get and some precautions to take. Some of the ingredients you may already have lying around the house. Also, when you make your own, you can make as much or as little as you want and make it in any color or shade that you so desire.

First things first, to keep from making a huge mess, you should create a designated slime making area at home, I highly recommend outdoors.

Also, you may want to designate an area of the house where it is to be played with. If you only have carpet, I would suggest having a tarp down when you are making it.

The next thing is to buy the ingredients.

Making slime is usually very cheap, and there are several ways you can make it. With this method, you will need an 8-ounce bottle of elmer’s white school glue, 1 ½ -2 tablespoons of contact saline solution, 1 tablespoon baking soda, and food coloring (to your preference).

1. Add food coloring and glue to a bowl then add the baking soda.

3. Next, you will knead the slime with your hands until it holds together. This may take a little bit, but keep going until it all mixes together.

4. Now store it in a plastic container or bag and wait until the next play time.

Parents may not like or enjoy slime (I know my wife hates the stuff), but our kids sure do love it and the original creator is probably making some pretty good money now with it.

Now today more than ever before, people have come up with their own ways of making slime so it can be a bonding experience for parents and kids too.

What are your thoughts on this slime trend that is going around?