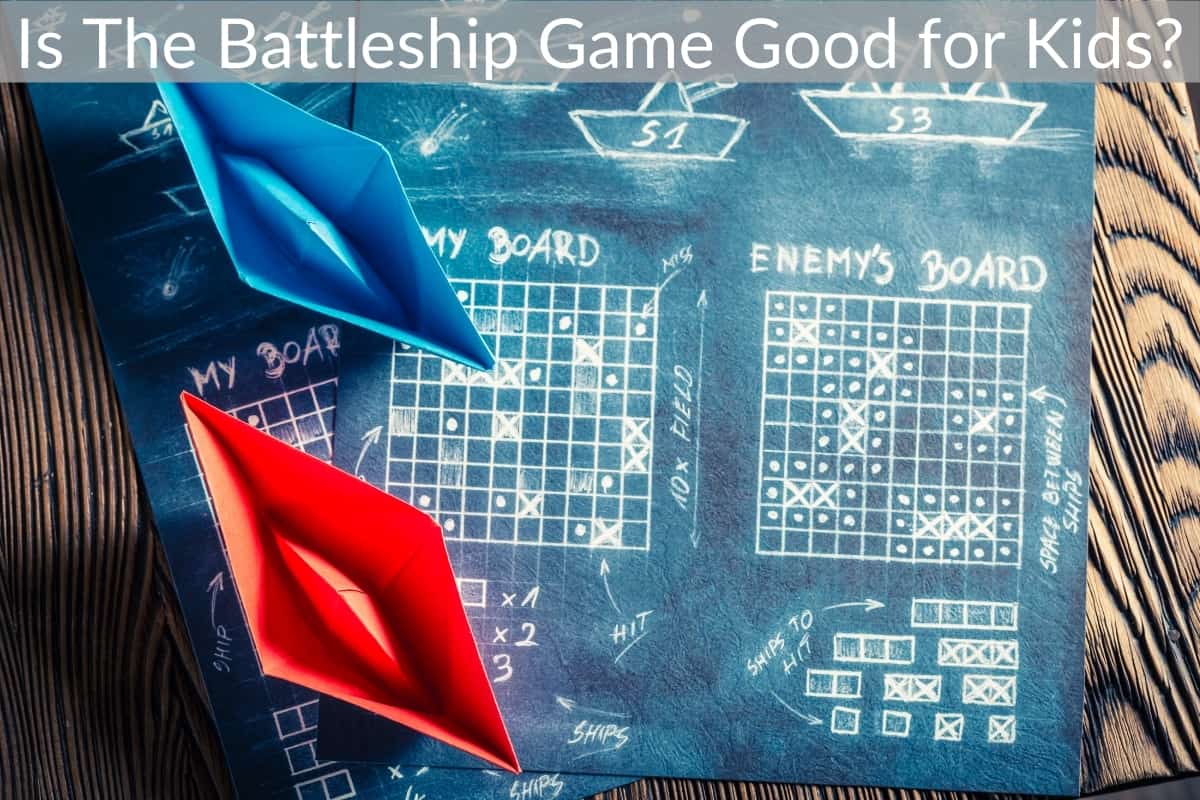 Battleship is a classic board game where two players place themselves in opposing navies with the intent of sinking their enemy’s fleet of ships. After initial set-up, the pair take turns calling off coordinates and trying to sink the other player’s boats.

The makers of Battleship have labeled the game to be played by those over the age of seven, but some have found that children as young as four can grasp the concept of the game, and start learning to play.

Although the game is able to be played by kids, some would question if it is a good game for them.

Although Battleship can be difficult for some children to grasp the concepts of, most children who are 7-8 will have fun playing it. As your children get older they are likely to enjoy the strategy aspect more also.

Not only will children be able to learn different techniques but they will also be able to get important life lessons from playing Battleship too!

When considering this question, we have to look at what a game can do for a growing, developing person and in the game Battleship, players learn a few things.

Some of these are very important for children to understand from a young age.

Some of the lessons that children might learn from Battleship are honesty, integrity, responsibility, and sportsmanship among others. Battleship truly does allow parents to let their kids learn these valuable traits while playing a game they could come to love and enjoy for years.

So how would kids learn these lessons, you ask?

Understanding the rules of Battleship, you know that each player can only see their board. It is up to each player to place their boats as they see fit, and cheating is pretty easy to do once the game gets started.

Children will have to learn honesty and integrity during play as their opponent will not know if they lie (about boats being hit) or cheat (by moving their boats).

Children will also learn responsibility on their turn.

It is up to them to keep track of their own hits and misses. If they choose to not keep track of where they have taken shots, it is very easy to repeat them.

The other player is not responsible to tell them that they already tried that spot, and essentially get a free turn every time they repeat a coordinate.

Children will also learn sportsmanship at the close of the game.

It isn’t a bad thing for kids to learn how to lose.

Losing at Battleship is not something that will hinder the kid for very long and more than likely, they will want to play another game to see if they can figure out how to win.

Sportsmanship learned from losing will take your child far, as they won’t feel like they always have to win to be having fun and it could even allow them to become both a better winner and a better loser

To see all of the different Battleship editions and spin-offs currently available you can click here.

The game of Battleship is one that has been around since World War 1, and continues to be a favorite among board game lovers the world round. It is a game of search and find that has thousands of possible outcomes.

The game is a battle between two opponents, and it is winner takes all.

Some think that all board games are decided by luck. Whether it is the roll of the dice, or a lucky pick, people feel that games are often left to chance for who comes out the victor.

Others look at every board game and can find some way to use the rules in their favor. They believe that with the right skills or strategy, they can separate themselves from the randomness of luck.

The ones that look at board games as luck being a small part of the game, have unlocked a vast array of learning examples. Whether it be strategy or skill, most board games have something they can help you develop and implement in your daily life.

Although there is some luck involved in finding your opponent’s boats in Battleship there is some skill involved as well. You need to have a strategy of why you call out certain spots and also where you place your own ships.

Looking at Battleship specifically, there are a number of skills that you can learn and implement each game.

Players can learn and develop skills such as memory, logic, strategy, and even some mathematical skills like probability. If you want your child to have learning opportunities while playing games, then Battleship is a great example of how to do that.

Not everyone will look at board games in this fashion; however, I would guess that most people don’t like losing. With Battleship, the only way to prevent yourself from losing consistently is to stop relying on luck.

Helping your child develop a solid foundation in these basic skills will not only help them play Battleship better, but it might also develop a love for learning that will stay with them the rest of their life.

Do You Get To Go Again If You Get A Hit In Battleship?

During the play of Battleship each player take turns trying to make successful hits on their opponent’s fleet of boats. On each player’s turn they call out a coordinate and their opponent determines if the player’s shot hits one of their boats.

There are only two possible outcomes from each coordinate, a hit or a miss.

Once the hit or miss has been determined and the pegs have been placed, play will always move to the next player. You do not get an opportunity to take multiple shots in a row in Battleship.

Play continues in this fashion until one player sinks all of their opponent’s boats.

Battleship is a great game no matter your age, or skill level. Whether you just want to pass time, or if you want to improve one of the many skills needed to excel at it, Battleship will always be a great game option for you.

If you want your children to learn about honesty, integrity, responsibility, and sportsmanship then this would be a good game to expose them to.

If you also want them to develop skills in memory, logic, strategy, or probability then again Battleship is a great choice!

If you want them to just have fun with a classic game, then Battleship is still a great option.