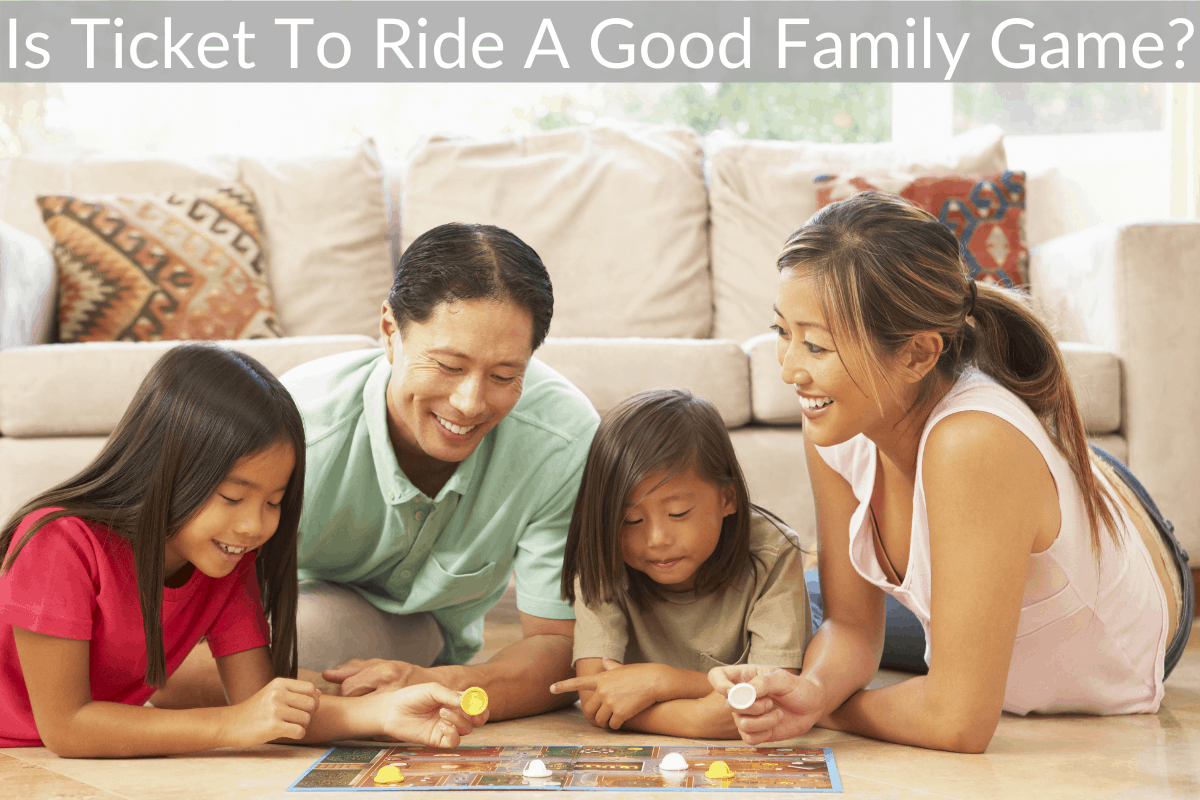 Do you love playing games that involve adventure, fun, and rewards? If so then you will probably love the Ticket To Ride game as well.

This game is designed to immerse you in cross country fun and adventure that lets you accumulate tickets for railway routes through different parts of the country. If you are able to secure longer routes, you get more points and hence more reward.

If you are able to finish your destination cards, you can also grab additional points.

Although Ticket To Ride has been out for quite some time now (released in 2004) there are still many people who have never heard of it. If that’s you and you are wondering whether this game is good to play with family and friends then read on!

Ticket To Ride is a ton of fun to play and also has many different strategies involved which makes it a great family game as long as your children aren’t too young. It’s recommended for ages 8 and older but I personally feel that anyone under 11-12 probably won’t enjoy it.

Once everyone knows how to play the game it flows a lot faster which also makes the game more fun. If you are playing it with younger children (even if they are 8+) it will cause the game to drag out more which in turn could start to annoy some of the other players.

The fast that there is also a lot of strategy involved in winning the game is another reason why I really feel the age should be 12+ and not the 8+ that the manufacturer recommends.

However, as long as everyone in your family is around that age or older then Ticket To Ride is an excellent family game that you can enjoy over and over again.

The game will typically last 60-90 minutes so it won’t take forever to finish it (like some other games) and it’s also different every time (because you will have different destinations and you can change your strategy).

There also isn’t a lot of conflict when playing Ticket To Ride since the majority of the time everyone will be working on completing their own train routes. This helps eliminate MOST (not all) of the fighting during game night!

To see the most popular Ticket To Ride variations (there are multiple) you can click here.

Is Ticket To Ride Easy To Learn?

Ticket To Ride is a lot of fun today and as I discussed above it makes for a great family game, but if you or your family have never played it before is it hard to learn?

Ticket To Ride is actually surprisingly simple to pick up and learn. After you’ve played it a couple of times you will grasp some different strategies better but the first time will be tons of fun too.

The first time that I played Ticket To Ride was with a group of friends. I was the only one who had never played it before (and I’d honestly never even heard of it). The first time I played it I didn’t win… but I didn’t come in last place either!

The only things that you really have to know to play Ticket To Ride is how to score points, how to claim routes, and what the destination cards mean. Beyond that the game is pretty self explanatory so it’s pretty easy to learn and play.

Is Ticket To Ride Fun?

Ticket To Ride is a great family game and easy to learn (as I mentioned above) but if it isn’t actually fun to play does it really matter?

Thankfully, Ticket To Ride is a lot of fun to play as well! You can use strategy to try and block opponents, get revenge on those who do that to you, and also try and strategize how to complete seemingly impossible Destination cards.

All of that adds up to a ton of fun and a different experience every time that you bring out the game. It’s never truly the same since the people you are playing with will always be trying to improve their strategy and the destinations that you need to complete will vary from game to game as well.

Will you spend some time trying to block the players who are in the lead?

Will you concentrate on finishing your destinations and just hope to beat them by purely being on the offense every turn?

Will you stockpile as many cards as possible and then go on a rampage at the end getting all of your routes at once?

There are many different strategies that you can employ and since there are so many ways to play it keeps the game fun no matter if you have placed it 5 times or 50!

How To Make Ticket To Ride More Fun

Now that I’ve covered whether Ticket To Ride is actually fun that certainly begs the question of whether there is any way to make it more fun.

Can you adjust the rules to make it even more enjoyable or competitive?

Can you change the way that you play to make it better?

You can certainly change some of the rules of Ticket To Ride to make it even more fun but just make sure everyone agrees beforehand.

To Ticket To Ride more fun you can:

Of course these are just a few of the many ways you could make the game more fun for you to play with family or friends.

Honestly sometimes adding your own rules/adjusting them allows for the game to fit your family a lot better. If you don’t have a ton of time then everyone starting with far more cards might be better.

Maybe you want to extend the game and make it more challenging so you make it where stealing a route costs 1.5X or 2X the original cost. This will allow players to sabotage each other while also extending the game since the players won’t go through their trains as quickly.

Of course all of the possibilities mentioned above are just scratching the surface. You could change virtually any rules that you wanted to or adjust whatever you want as long as all of the other players agree to it before starting the game.

I hope this article was helpful in answering your questions about this amazing game. It’s 100% a great choice for playing with family or friends and it’s loads of fun to play as well.

If you are wanting more of a challenge or just to switch it up a little then changing the rules or even how you play can do that for you as well.