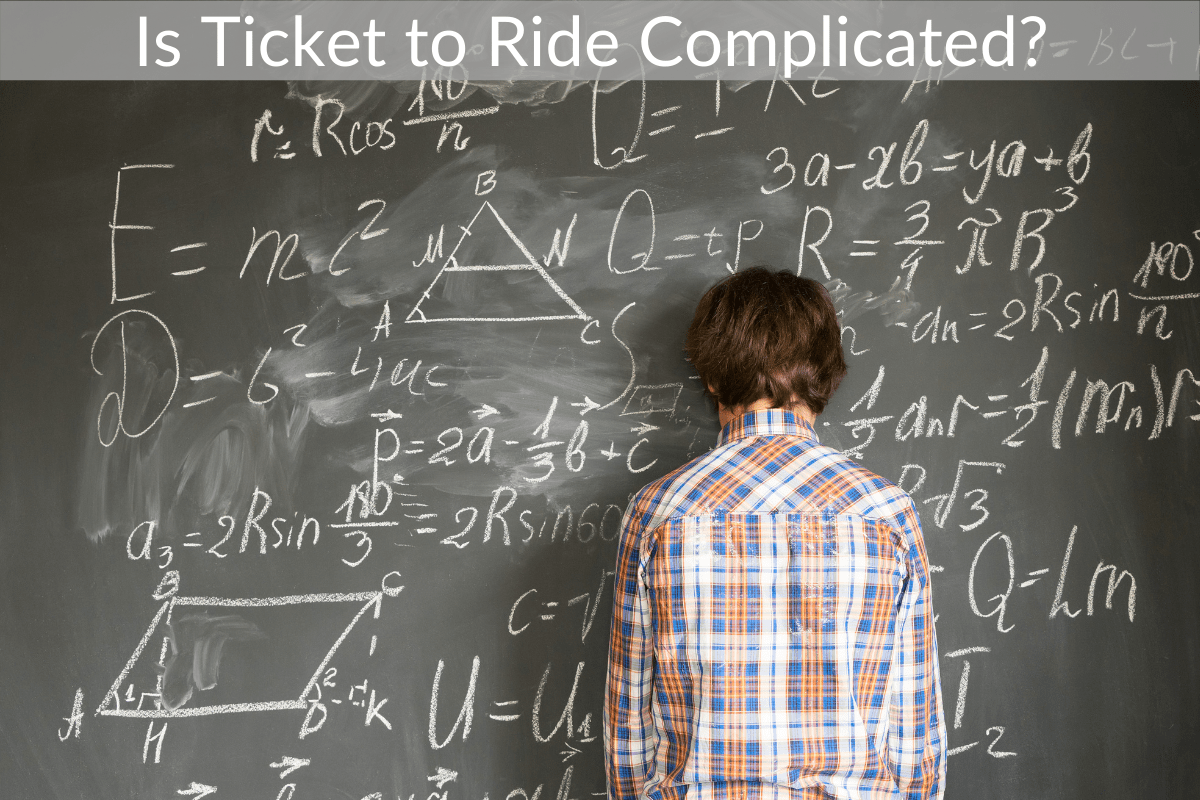 Gathering the family around the table for a game night is one of the best feelings ever. Playing board games with the family builds experiences, forges lasting memories, and sometimes might even form some (hopefully lighthearted) competition between family members as well.

One of the best board games out there for folks to play is Ticket to Ride.

This game is all about traveling as far as possible across North America via train by choosing the best route and using your train tickets wisely to complete your destination cards.

It may seem like a convoluted and confusing game to some people but is it really that complicated?

Ticket To Ride is actually not complicated at all. Your basic goal is to fill the board with your trains and complete your destination routes (which vary based on the cards at the beginning). You will also want to try and block people from completing their routes as well.

Ticket To Ride only takes 60-90 minutes to play so it’s far faster than Risk, Monopoly, etc. and also is less complicated than those games since you can’t steal routes from people (you can steal routes in some of the explanation pack games).

This means once you complete a route it’s yours for the rest of the game.

So all you have to do is collect train cards, find the best route to complete all of your destination cards (if at all possible) and then start using your train cards to complete those routes.

Obviously you can (and will) want to block other people’s routes if possible but even if no one blocks each other it’s still a fun game to play and also pretty simple too.

To learn more about how to play this game, what the objectives of the game are, and why it may be the perfect board game for you and your family you will want to keep reading.

To see the most popular Ticket To Ride games (there are many expansions) you just have to click here.

What Is The Objective Of Ticket To Ride?

The objective of this game is simple, be the player with the most points!

You gain points by completing destination cards, placing your trains on the routes, and by having the longest train.

In the original version of the game, you will play on a game board that resembles a map of the continental United States as well as portions of Canada. There are more expansions as well as other variations of Ticket to Ride that introduce new areas and locales, too while also changing the rules slightly.

Every player gets dealt destination cards at the beginning of the game that will tell them what routes they will need to finish so that they can get points.

Each unfinished destination card counts as negative points for your final score.

Each person draws train cards so that they can place their trains onto the map which enables them to complete the routes they need to connect the two points on the destination cards.

Players are also able to earn points by completing each route but those point values vary depending on the length of the route (longer routes are more points).

You can gain more points by choosing longer routes, but beware since the longer the journey is the more train cards you will need in order to finish the route (routes range from one to six trains long).

At the end of the game, points are tallied up and the person who had the longest continuous journey is awarded some bonus points.

The player who has the most overall points after all the points are added and subtracted from the destination cards wins the game!

Is Ticket To Ride Hard To Learn?

Of course, as with any board game, you will need to take some time on the first playthrough to get a feel for what goes down, and how to play the game, but once you get the hang of things you will have a blast and it isn’t too difficult either.

Ticket to Ride is quite a simple game to learn, and that makes it a great choice for people of all ages.

All that players need to do to start the game is draw three destination cards. Every card has a route laid out on it showing two destinations that you will want to connect.s

Out of these three cards, you will decide which two (or three) routes you want to shoot for. You are then able to place one of your three cards back into the pile if you don’t like the route, but you must hold onto two of these destination cards at all times.

Every time you complete one of the routes that are shown on your cards you will earn points. Each turn every player will draw new train cards from the pile and add them to their hand. On your next turn you can either draw again, draw an additional destination card or play the train cards that you have already drawn.

Because routes vary in their lengths you need to be able to accrue enough cards so that you can place your trains onto the track of the same color (or a gray one which is any color).

This is made more difficult through the possibility of someone else taking the route that you need before you get enough train cards to play it.

Is Ticket To Ride Complicated To Play?

Understanding the rules and actually playing the game are two different things. Thankfully, the mechanics of the game are straightforward and easy to implement. You should not run into any issues and once you start playing you will see that the game is not complicated at all.

All you need to do is draw some cards and place your trains on the tracks, it’s as simple as that.

There is no need for players to interact with one another since there is no form of trading or anything, and there aren’t any super deep tactics or strategies that you can implement to get an edge over your opponents (besides blocking their routes and then blocking yours).

The only other strategy is trying to decide what routes to use to try and complete your destination cards while also creating the longest train possible to try and get the bonus points.

This simplicity is shown in the fact that the lines that run between cities (usually only one or two) cannot be used by any other players once you take them over (on the regional game).

That means that if someone has already claimed a train line that you want to use you need to find an alternative route to your destination.

Who Is Ticket To Ride Best For?

Ticket To Ride is not the most competitive board game by a long shot. So, while it can get a bit competitive sometimes, it does not ever reach the level of frustration that other board games have which means it isn’t best for those who crave a competition.

Because players do not directly control what destinations they are given it is not all that common to be able to cut someone off and spoil their route (but it is possible).

You can win this game without trying to take down the other players, which is a nice thing for families who want to avoid more competitive games and just have a fun family night.

It’s a great choice of game for people who just want to chill and see how well they can do without having the harsh competitive nature of board games like Monopoly or Risk.

One Warning About Ticket To Ride

Ticket to Ride is a very easy and accessible game that anyone can enjoy.

However, as with most games that implement the use of small plastic pieces (looking at you, Monopoly), you will need to be careful not to knock the game board around while playing, or you may end up sending all of the trains flying.

In the later stages of the game when players have begun stringing together long chains of trains the board can get pretty crowded with pieces.

It isn’t a huge issue, but things can begin to get a bit messy so this game is best played away from small children and on a sturdy table.

Ticket to Ride is an enjoyable game that nearly anyone will enjoy. Its style of chill and relaxing gameplay is a wonderful choice for families that just want to have a calm and happy game night, and it can be enjoyed with a friend or up to five people total.

The game also doesn’t eat up tons of your time, as a session can be finished in just under an hour. This game is anything but complicated, so don’t hesitate to pick it up and try it out sometime.