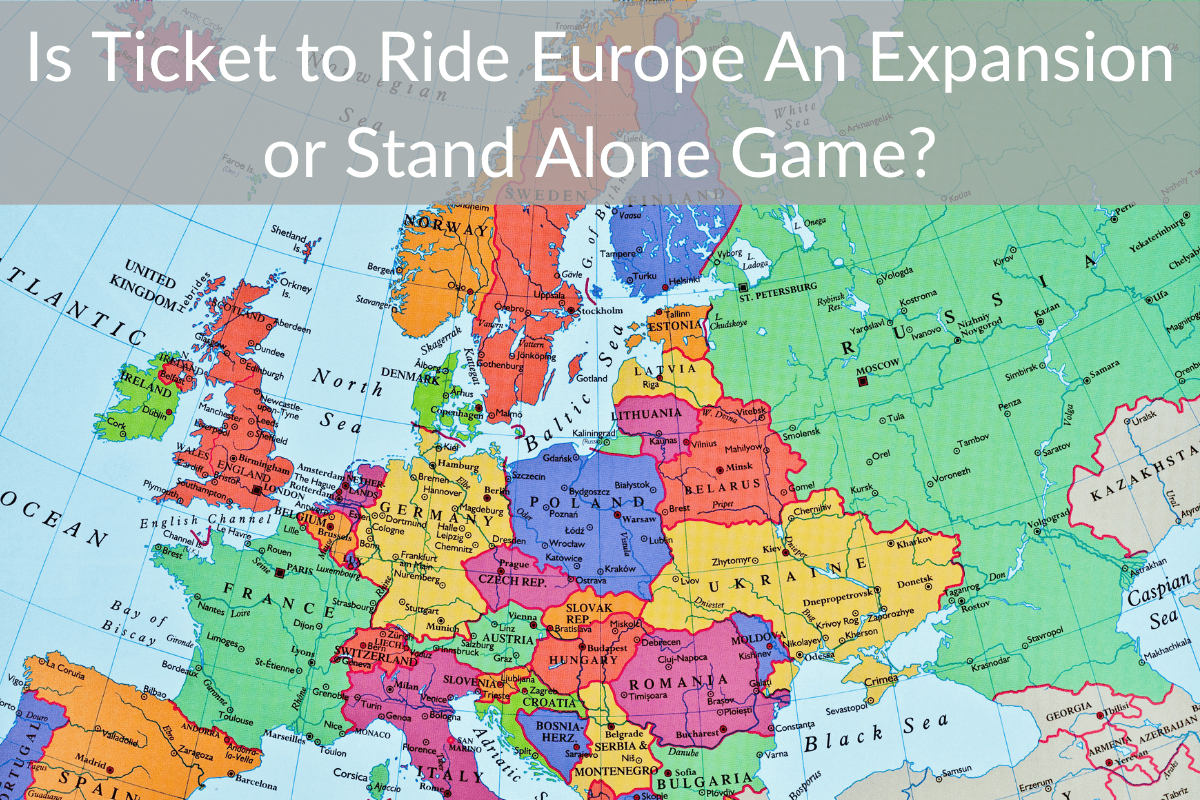 One of the most popular board games that have risen in popularity not only in America but also in several other countries is Ticket to Ride.

Ticket to Ride is an interactive board game perfect for families and friends to play. It takes the players on a ride to different destinations, depending on the map (specific game) that was purchased.

The main goal of Ticket to Ride is to get the most points by completing the longest continuous route, claiming routes, and connecting the two cities on each of your Destination cards.

The first-ever Ticket to Ride that was created was the American version that features the maps of America and southern Canada. Because of its success, the company has created more maps from all around the world.

Many people are interested in purchasing the Ticket To Ride Europe edition but are unsure if they need to buy the original first or if the European version is a stand alone game that you can play without needing the original version.

Ticket To Ride Europe is a stand-alone game that can be played even without the original American version. However, most people prefer to buy and play the original version first since it is simpler and has less rules to learn.

Because Ticket To Ride Europe is a stand alone version, people who live in that region of the world will often prefer to buy it first rather than buying the original that has less familiar geography.

Differences Between Ticket to Ride Europe & The Original

Ticket to Ride Europe is meant for the European market, although it can be played by anyone, regardless of where they’re from.

Those from Europe, however, will find the game more appealing because they will be able to resonate with it more simply because of where the map covers.

It will also be easier for them to find certain areas since they will be familiar with all the destinations, cities, and routes in Europe as compared to those in North America that they might not be as familiar with.

Ticket To Ride Europe focuses on the heart of Europe itself, with destinations like Edinburgh, Constantinople, Pamplona, Berlin, and many more.

The European version has also been made new and improved, upgrading some features that were not seen in the original Ticket to Ride USA. Some upgrades include:

Ticket to Ride Europe still has the same familiar gameplay that players loved in the original Ticket to Ride game, however there were slight changes and a few new features.

Some new aspects that can be enjoyed in the Ticket to Ride Europe gameplay include:

There are also extra cards to help players access and maximize these new features to help them win the game.

The Ticket To Ride Europe version adds a slightly new twist to the original USA variation. Some say that it’s more challenging compared to the original version because of the new features.

Similar to the original Ticket To Ride, the Europe version can also be played by a minimum of 2 and a maximum of 5 players. The gameplay lasts for 30 to 60 minutes but can take longer if it’s someone’s first time playing. .

Learning the game can be done in less than 15 minutes thanks to its simple and straightforward nature. It can also be played by the entire family — including children.

Does Ticket to Ride Europe Have Expansions

While Ticket to Ride Europe is a stand-alone game that doesn’t need the USA version to be played, the Europe version has its own expansions that you can purchase to play along with it.

Some of the most popular European expansions are:

The Europa 1912 needs to be played with the original copy of the Ticket to Ride Europe board game. It is meant to upgrade the game with new rail destinations and fresh gameplay.

The inclusions of Ticket to Ride Europa 1912 should be added as bonuses for the Europe board game. The contents are:

The Warehouses & Depots strategy involves skillful tactics that can help the player win. The Train cards can be accumulated to build routes to Wooden Train Depots.

This helps the players build longer routes and win the game, as long as they do it with the proper strategy and timing.

The Ticket to Ride Orient Express is another expansion of Ticket to Ride Europe. It’s simpler than the Europa 1912 and doesn’t have as many additions and gameplay twists.

These new cards are meant to be mixed with the original Ticket to Ride Europe deck of cards and are to be played together.

With the new cards, the players can access more destinations such as London, Constantinople, and many more.

Other than that, there are no other elements or features added to the game. This is probably why the Orient Express extension was not a huge hit compared to the Europa 1912.

And because of that, this expansion is no longer sold in stores. However, you can look for online sellers on eBay and other second-hand e-commerce sites if you want to try this expansion out.

Ticket to Ride Europe has been a huge hit, especially with the European public who are able to connect and resonate with the game much better.

This is because they are familiar with the places and routes in Europe, making them more comfortable with the European version.

If you want to add a little twist or more challenge to the game, expansion packs like the Europa 1912 and Europa Orient Express are available.

Other expansions also work with the stand-alone Ticket to Ride Europe Map.

Whether you play Ticket to Ride Europe on its own or add new extensions and features, it’s surely a game the whole family can enjoy.

And you can never really get sick of it, considering that you have tons of other maps that you can buy as expansion and your strategy can constantly evolve over time as well.