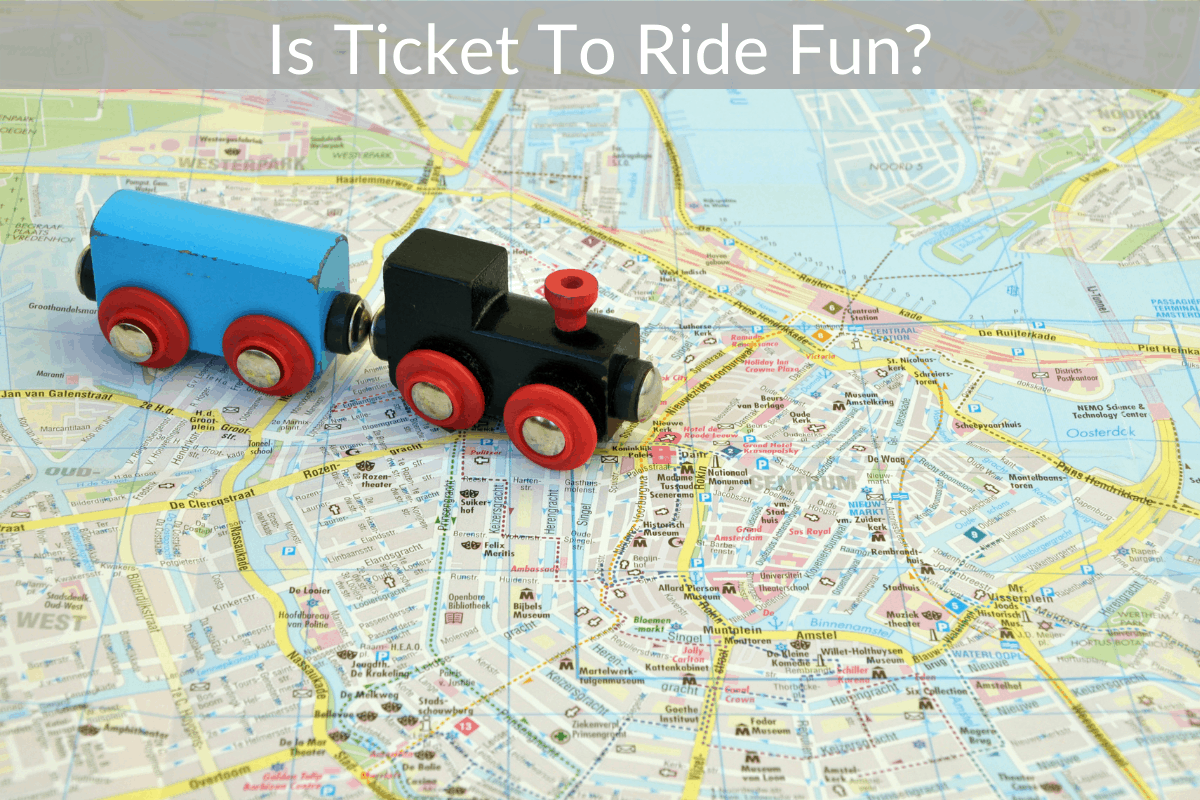 Ticket to ride is a family board game that has its premises set in the early 1900’s. Each player is a “traveller” who needs to collect matching train cards and claim railway routes that connect the various cities throughout North America. There are also a few other variations of this game that are set in other countries/areas of the world.

Ticket To Ride has been taking the country/world by storm and with over 5 million games sold you likely know someone who has bought one, but if you’ve never played it you are pretty likely to wonder if it is even fun.

Playing Ticket To Ride is definitely fun as it involves a mix of strategy, luck, and getting in your opponent’s way! You can enjoy being the ultimate strategist or just completely take over the map messing up everyone else’s routes (but they might hate you)!

The premise of the game is that players need to complete the routes mentioned in their game cards to gain points. You also get points every time you play a train car on the board.

The longer the route is that you compete the more points you get. However, the challenge comes in when someone else on the board has a similar destination… that’s where the strategy comes in!

Will you try and take over the smaller routes before someone else does or will you stockpile cards to complete the longest routes first?

Will you try and guess where your opponents are going and attempt to block them while also trying to complete your routes?

That’s the fun of the game!

To see all of the available Ticket To Ride options (there are many different games) you can click here.

But is Ticket To Ride actually fun?

Whether playing Ticket To Ride is fun or not really depends on what types of games that you enjoy. Ticket To Ride feels like a cross between Monopoly and Risk so if you don’t enjoy either of those games then you likely won’t have fun with Ticket To Ride.

One of the most attractive features of this game is that it lures in players with its colorful board and trains but you will quickly get hooked in trying to beat your competition!

Don’t be fooled by the simplicity of this game as there really is a lot of deep strategy involved if you want to win. Choosing when to start placing trains is one of the hardest things to decide as if you are only one turn too late you can find your route already taken!

This game does keep you on your toes but in a more fun and exciting way as normally none of the players are out to get you (unless they need the same routes as you) however, often someone will claim the tracks that you need to complete your journey because they needed them as well.

This might cause you to end up having to take a longer route or even keep you from completing a route entirely (causing you to lose points)!

Other reasons why Ticket To Ride is a fun game

There are a variety of reasons why I personally enjoy this game and feel that it is actually a good amount of fun. A few of those reasons are:

It is very easy to learn

Like most family board games this one is also pretty easy to learn. You begin the game by drawing three cards which tells you which routes you will try to complete during the game. On your turn you either draw cards (that you use to play your train cars), play your cards (to place trains on the board), or draw new destination cards (if you finished yours already or want to try to get other close destinations).

You will gain points as you complete any routes on the board and will also get points when you complete a destination card. Each player will continue to draw cards (or take one of the other actions) during their turn until one person is down to 2 or less train cars left.

Everyone then gets a final turn and then the points are added up (or subtracted if you didn’t finish a route).

The winner is the player that got the most points by completing destination cards and by placing train cars on the board.

It is easy to play

The rules and mechanics of the game are simple and straightforward. You simply draw cards and then place your train cars on the board based on the card in your deck that you lay down.

Despite the game being easy, the strategy required to win the game does take a bit of practice to get right which is why the game can be played over and over again and still be tons of fun.

Doesn’t require much combat between players

Although sometimes players will take routes that other people need, that is much more rare than you might expect. Since everyone has their own destinations they are trying to reach then this game causes everyone to be more spread out and be working on their own for the most part.

This helps to keep fights and arguments to a minimum with this game as no trading, swapping, or taking other people’s tracks that they have already claimed is allowed.

There are only one or two lines between cities and once a player claims it nobody else can access it. This means you will have to use a different route to your destination.

Conceivably, one player could just be the spoiler throughout the more game and ruin the destinations that everyone is trying to complete but if they choose to do that then they will always lose so most people don’t go that route.

The game time is perfect

We don’t want family game time to end too quickly, do we? Well this game is perfect because it takes a while to finish but not so long that everyone is tired of it (I’m looking at you Monopoly)!

However, just because it has a defined ending (when one person is down to less than two train cars). Doesn’t mean the game will always be short. If everyone spends more time collecting train cards and waits to play them until they have all of their needed train cards in hand, then it might last a bit longer than normal.

Once the players are used to the game mechanics it does speed up quite a bit though since there are only 3 things that you can do per turn.

It is a more relaxed and peaceful game

If you don’t want to experience the stress of high levels of competition, you will definitely enjoy the Ticket To Ride game. This board game doesn’t require its players to attack each other directly and honestly you are often better to just complete everything for your destinations than you are to try and block the other players.

You can just chill and enjoy your tour through each track on the map. This makes the board game great for families to have a more relaxed evening at home rather than getting mad and upset at each other.

Which is the most fun Ticket To Ride variation?

Although the game strategy is the same for all versions of the Ticket To Ride game, each country’s map offers some distinctive features. Here are the different game sets offered with their unique mechanisms–

TTR USA – This one is best suited for people new to the Ticket To Ride game as the map is easier. Players can find their routes easily especially if you are from the USA. It has a 1910 expansion as well which makes it more suitable for advanced players.

TTR Europe – It starts to get complicated from here, although we feel newbies can still work their way through this one. The challenge is of course in finding the routes, but you have an option to access another player’s route at the cost of a few points which is obviously more advanced. There is also an option to use ferries but you need to collect the locomotive card first.

TTR Legendary Asia– The Asia map is what you need if you are looking for an extra dash of fun. The unique feature in this version of the game is being able to navigate through mountains. To simulate the loss of trains that would happen while going through the mountains you have to discard extra train cards from your hand when claiming a mountain route.

In all the versions of Ticket To Ride the game ends when one player gets down to 2 or less train cars.

Ticket To Ride is an ideal game for families and is honestly lots of fun to play. The game can be played with 2 to 5 players and although anyone above the age of 8 can play it, it is better suited towards teenagers or above.

The game can be played in around 30 to 60 minutes but if most of the players are new then it can take a bit longer.