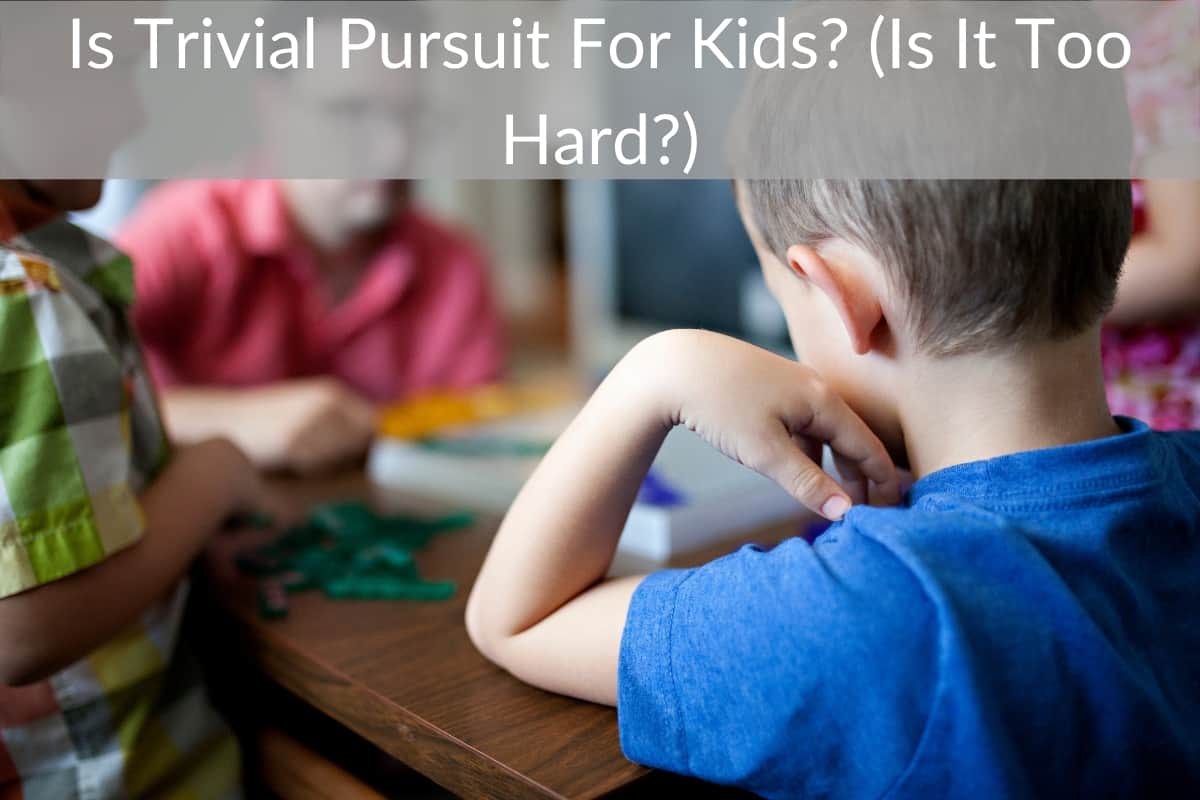 Trivial Pursuit is at its heart a general knowledge test. It is one that will test not just textbook type knowledge, but also Pop Culture type knowledge.

To win requires a little luck and a whole lot of general knowledge that is pulled from the recesses of your mind.

Due to the nature of Pop Culture, older editions of the game become more difficult the younger the players get. The makers of the game have a suggested age range to play starting at 16 years-old.

Understanding that the market of board game players under the age of 16 is rather large, Hasbro has developed editions of the game focused on the younger crowd as well.

So to answer the question is Trivial Pursuit for kids.

The original Trivial Pursuit game, and any updated versions, is not marketed toward kids. The questions are very challenging even for adults, and requiring a child to answer them would be unfair.

However, there are editions available for kids.

There are several editions of Trivial Pursuit Family, Junior, and themed games like Harry Potter and Nickelodeon that have suggested ages as low as 8 and up.

What is interesting in these editions is that they are often more difficult for adults who might not follow the Pop Culture of their children, and this kind of levels the playing field for everyone.

To see all of the different Trivial Pursuit editions and spin-offs currently available you can click here.

Is Trivial Pursuit A Good Game?

Trivial Pursuit is a classic game that most of us have seen at our parents or grand-parents’ houses. Often we think the game is old and outdated whenever we try to play it because it has likely been there since the 80’s.

What most people don’t realize is that Trivial Pursuit has been updated throughout the years to maintain current Pop Culture questions and not have a incorrect history question because of how old the game is.

Due to the continuous updating of the questions, and partnering with a lot of brands to provide themes like Star Wars, Harry Potter, and Nickelodeon, among others, Trivial Pursuit has over 100 editions that have been published.

With that many editions of the game available, you bet the game is good.

You don’t continue to churn out new material for a game that isn’t considered a good game by most people. In fact, it proves just the opposite.

It is an amazing game that stands the test of time, and the public is always looking for updates to one of their favorite trivia games on the market.

Due to the nature of history and Pop Culture, and to a lesser degree science, constantly changing, if you happen to be playing a game that was printed before you were born, it might seem overly difficult or dated.

I promise that if you find a newer edition, you will be much happier with your experience playing this classic game.

Trivial Pursuit is a great game to play with friends and family. It is fun for everyone, and even presents a challenge no matter the age group. It has six available playing slots and each can be filled by either individuals or teams.

Often, your group won’t be large enough to break into teams, or some might want to challenge their individual knowledge as compared to group knowledge.

The game is designed to be played by 2-6 players, or 2-6 teams of players. Therefore, it can certainly be played with just two players.

The most difficult part of playing with just two people is that you are alone and that limits the pool of knowledge available to you to answer questions.

So, yes Trivial Pursuit can be played with just two players. It does increase the challenge, but if you are looking to test your knowledge it isn’t a bad place to start.

Which Trivial Pursuit Edition Is Best?

Trivial Pursuit has been cranking out editions of its game since the 1980’s. With that in mind, there are over 100 different stand-alone versions of Trivial Pursuit. In terms of what is the better version, opinions will vary.

With over 100 to choose from, it really is going to come down to personal preference.

When determining which one is the best, most polls are going to have the classic edition on top. Others that are voted highly are the 40th Anniversary edition and the Masters edition.

There are an absolute ton of themed games as well, so the best for you might be Friends, Star Wars, Harry Potter, or any number of other possible answers.

The truth is all the editions of the game are always good. If you happen to see an edition of Trivial Pursuit that interests you more than others, it is likely the best one for you.

If you want one that is going to appeal to the widest audience, then sticking to the Classic edition and other similar non-themed editions would be the safest bet.

Trivial Pursuit has amassed an absolute enormous collection of games all to test your knowledge. Whether it be a general knowledge type game such as the Classic or Masters edition, or more niche knowledge such as the Beatles or Horror Movie editions, there is a game out there just for you and your group of friends or family.

Some are going to be harder. Others are going to be aimed to challenge the smartest people you know. The nice thing is that the game has been so successful that they realized capturing the market of the younger generations was important.

So even though Trivial Pursuit’s main game is designed for players 16 years and older, they have plenty of editions for you to play with your kids, and they start with kids as young as 8 years old.

What a great way to spend time with your young children. Having fun and learning all at the same time.