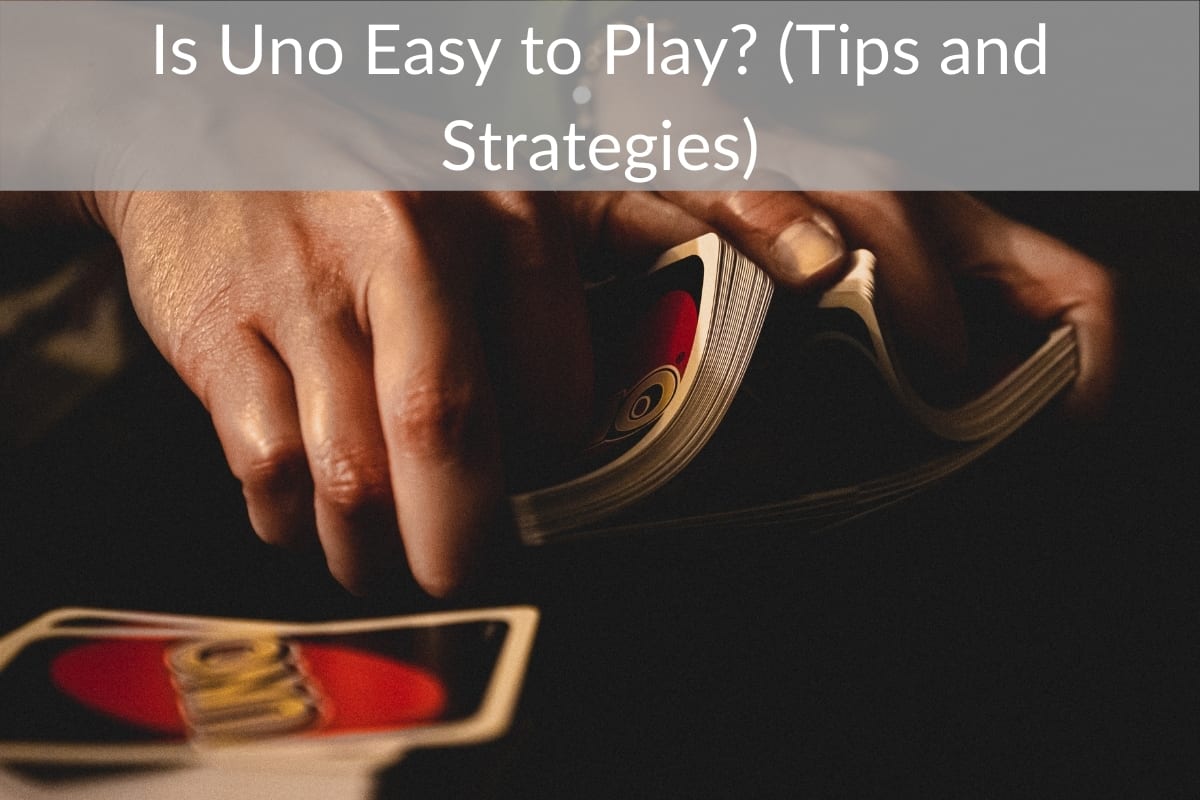 Uno is a classic card game that the majority of America is very familiar with. It is a fun game that you can play with a wide range of age groups.

Uno has thrived through the years, and continues to be a popular purchase among all age groups even today.

The goal in the game of Uno is to quickly and efficiently discard your hand and minimize the points you have in your hand by the time someone goes out. There are lots of ways to go about doing this, and we can look at those in a second.

The real question, though, would be is Uno easy to play?

Playing Uno is incredibly easy and the concept can be grasped by children as young as 6-7. However the smaller nuances of planning ahead and knowing the right time to play certain cards takes a bit longer to learn.

House rules are so common in the game of Uno that you absolutely have to clarify the rules before starting a game.

If you go by the rules as written, it is simple. So let’s focus on that today.

When considering the rules of the game of Uno, we can see a few different strategies that can be effective ways to play the game.

One strategy is to minimize the points in your hand. This means playing your draw two, skip, and reverse cards early and as often as you get them.

Another strategy is to maximize your turns as compared to other players. To do this, you might implement a little more strategy when you play a draw two, reverse, or skip.

Lastly, a good strategy is to pay attention.

If you know someone used a wild to change the color, try to get it back to the color they changed it from. They will likely have to draw a card and lose a turn.

Some things to watch for while playing would be if someone draws a card and then tries to play one from their hand. This is not a legal play. If someone plays a draw four wild card and you believe they have a different card in their hand they can play, you can call them out by challenging it.

If you are correct they have to draw cards as a penalty.

In general, Uno is a fun and competitive game that you can play with adults just as easily as with kids. Some people only play hands, while others will keep a running score until someone reaches a predetermined score.

Both ways are fun and provide their own strategy.

To see all of the different Uno editions and spin-offs currently available you can click here.

Is Uno A Game Of Skill?

Oftentimes games that are considered “for kids” are looked at as lesser games, or games that contain little to no challenge. We often  look at them as lesser versions of meatier games.

This might be true for a lot of games out there, but Uno is not just made for kids, it just happens to be a game playable by kids without adjustment to the rules.

I wanted to make sure to clarify the difference.

Games like Uno are simple in the context of how you play them, but it can be difficult to play them well against others.

The skills needed in Uno are forethought, bluffing, and ingenuity. During the game, you will see many changes. You have to be able to keep up with these changes, while also keeping track of who is drawing cards and who is playing them.

There is a lot to track, so be sure you pay attention.

In addition to these skills, you do need a little luck to come away the winner. The amount of luck is significantly reduced if you do apply some skill to the game.

If someone says “Uno ” then you know to start getting rid of your high point cards, and try to avoid letting that person play another card.

All this takes not only skill, but attention. Try to stay on point. Try to ensure that you know what card is played by who, and not let someone distract you with the latest gossip.

Can You Finish Uno On A Wild Card?

In Uno, there are number cards and action cards. Most of the action cards are colors like the numbers, but there are two different types of “wild” cards in the game.

The first “wild” is simply that. You can play it any time you’d like to change the color that is to be played.

The other “wild” card is the draw four wild.

This card can only be played if you have no other non-wild card that you can play from your hand. If this is the case, you can play the draw four wild and select the color to be played and the next person has to draw four cards and lose their turn.

There is no rule against ending the game on a Wild Card. The last card in your hand can be any card, and if you are able to play it, the remaining players will tally their cards for points (if you are playing that way).

In fact, if you play a draw four wild or a draw two card as your last card, the next person does still have to draw the cards prior to tallying their points.

Some people believe that action cards can’t be your last play, but that is just a house rule that has made its way into their games in the past. It is not a rule that should be followed unless agreed upon prior to the start of the game.

Uno is a fun card game that can be played in just about any environment. It is fun for all ages. It can be as skill or luck focused as the players allow it to be. Uno is something that can be enjoyed for years by groups of friends or family members.

Uno is also a game that has been around for a long time because it is enjoyable. So grab a deck of cards and a few friends and play. It is worth it.