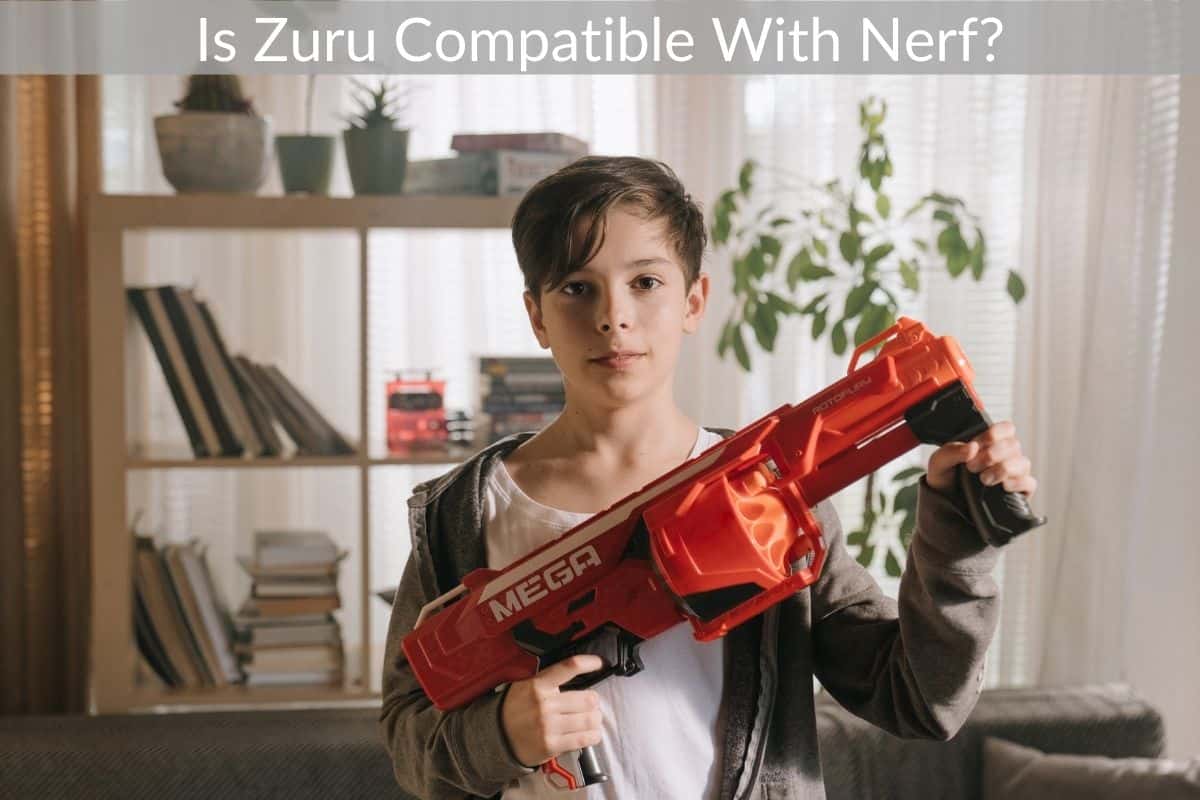 Zuru makes a variety of toy guns and darts that are a blast to play with. Of course the most popular (and well known) brand of toy dart guns is Nerf so knowing if Zuru is compatible with Nerf guns or not is important.

The Zuru Darts Refill case has around 200 darts and is compatible with most leading brands, including Nerf guns. They work in most Nerf blasters and guns as they’ve been designed to fit in them perfectly.

Zuru darts are also relatively cheap compared to Nerf darts, and you can buy a box of 200 darts for less than twenty dollars, which means they bring you good value for your money. If you’re thinking about stocking up for a Nerf gun tournament for cheap, then you should opt for the Zuru darts.

The Zuru guns are also compatible with Nerf darts. So you can use the two brands interchangeably.

The compatibility for these darts however, does depend on the kind of Nerf gun that you’re using. Some Nerf guns are more compatible with darts like these whereas other Nerf models only work specifically with special Nerf bullets.

Some Nerf guns like streamline darts have a more compact diameter, so the compatibility of the two brands may depend on the type of guns and the darts you use.  Zuru also has certain guns that only work with darts from its brand as well. However, this doesn’t pose as much of a problem since the Zuru darts are more accessible.

I will go into the details of what makes the two brands compatible or incompatible in the rest of the article below.

Are All Nerf Darts Compatible?

All Nerf blasters come with their own set of ammunition. However, you may have had your blaster for an incredibly long time and lost the ammunition along the way, as can happen with something as small as the Nerf darts.

Almost all Nerf darts are compatible with other Nerf guns however this isn’t true of every single one. Nerf has made specific models that only accept streamlined darts or larger darts so you won’t be able to use normal Nerf darts in those.

There are some clip system blasters of the Nerf brand that need very specific darts and can’t use any other Nerf darts, much less Zuru darts. However, for most blasters and Nerf guns, Zuru darts can be compatible.

The clip system darts only take in streamlined darts, which are available on the Nerf website. Zuru doesn’t currently have any streamline darts, and so it makes sense that you can’t use Zuru darts in a Nerf Clip System Blaster.

Generally, however, Nerf darts are compatible with Zuru guns as they are the same overall.

They have a similar shape and can be applied to Nerf guns that use the same kind of darts.

Why Are Zuru Darts Popular?

Zuru darts are popular because you can get more of them for far less money. If you’re someone who needs to fill up for a tournament, you’re more likely to buy a whole canister of Zuru darts than Nerf.

Nerf darts are currently around $10 for a pack of 20. Whereas, Zuru darts cost $15 for 200. There’s a big difference between the two, and most regular players will choose the larger amount of darts.

You may have bought your Nerf gun and are now running out of ammunition, or your child may want to join a Nerf gun tournament. In any case, you need to consider some significant features before you buy any more darts.

You should thoroughly look at the toy gun you own and the kind of ammunition it needs. What kind of blaster do you have?

Check whether it’s a toy handgun, a blaster, or a clip system gun. What company’s model are you using? Is it Zuru or Nerf?

Once you know the company, search for the model and see which equipment and darts are ideal for use with that model. Knowing the answers to these questions will give you a better idea of what darts to choose.

2. The darts you were using

If the darts that came with the Nerf gun were streamlined darts, then those are the ones you need to buy to replace them. If they were normal ones, you need those and so on.

Understanding the darts that came with the toy and are most compatible with it can lead you to find better replicas so you can ensure that it functions as best as it can.

Darts cost money. However, some darts cost less money than others. You should thus be aware of your budget before you get and buy darts.

I’ve already mentioned how Zuru darts are more cost-efficient and, thus, popular with toy-gun owners. Nerf darts cost more, but they work the best with the Nerf guns you own.

If you can afford Nerf darts, then you should opt for them. If not, Zuru works with most guns and thus can be a viable option too.

If you need a large number of darts since you have a dart machine gun or a blaster, then you’d opt for something cheaper. Nerf bullets aren’t as cost-efficient as Zuru, and knowing how many darts your gun needs can help you set up a budget.

Nerf guns are compatible with Nerf bullets and safe. Nerf also states on its website that they have the best darts with softer ends, so they don’t harm anyone or anything.

Using Zuru darts that aren’t for Nerf guns may have some unintended, negative results. Thus, it would be best if you had a safety test before using the new darts in a different brand’s blaster.

Zuru and Nerf are compatible but only to a degree. The guns and darts leave a lot of room for both compatibility and incompatibility.

It would be best to look into the specifics of both your toy gun and the darts before buying darts for your gun. Many users believe that you can only achieve the best possible results if you use the darts that come with the guns.