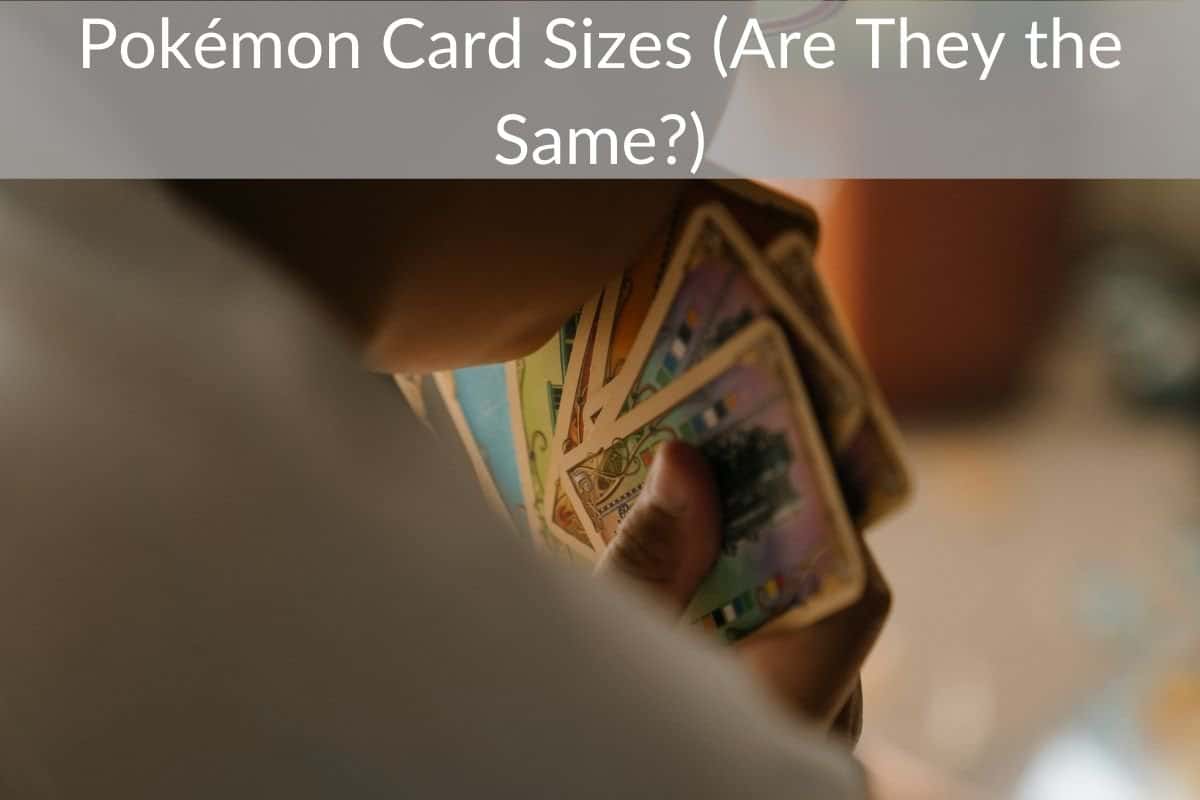 ​Pokémon originated in 1996 and really gained popularity in the United States in 1998 when it released its games on the Game Boy.

It has recently regained its popularity through the Pokémon Go app. It was wildly popular when it came out and the popularity held on for a while, but then started dwindling.

With the launch of the Pokémon Go app a few years ago there was another huge surge in its popularity, and it has managed to continue hanging on.

Another popular item in the Pokémon world is the trading cards.

This makes it much more convenient when it comes to housing your cards and keeping them safe.

​The size of your cards can vary based on the purpose those particular cards serve. The standard size was determined and is used as it fits the typical needs of what you are going to need to use the cards for.

A card that is 2.5 x 3.5 inches is easy to hold, fits in your hand nicely and you can hold multiple cards at one time relatively easily if you need to do so.

Smaller cards can be used if you need to hold a lot of cards in your hand at once, think about playing the game bridge as an example. They can also be larger for things like magic if needed so that more people can see them at a further distance.

Kids card games tend to have larger cards as well because they do not have the same dexterity as adults and holding several small cards can actually be more challenging to them.

To get your hands on the most popular Pokemon cards on the market just click here.

​How Do You Store Pokemon Cards?

As with anything you collect, you want to be able to keep your Pokémon cards in good condition. You see it all the time with baseball cards, someone finds their old cards and learns they have an extremely valuable card in their possession.

The only problem is, the card has been in storage for a really long time and was not properly stored so it doesn’t look as pretty as it should.

My oldest child got really into collecting Pokémon cards and trading them with their friends when they were in third grade. As with all kids, they throw things in their school bags, forget about them and leave them in there for weeks or months.

Cards would go missing, they would be upset, they would find the missing card and realize it was damaged and then get upset all over again.

​We spent a lot of money on cards for them and got tired of watching them lose them, bend them, rip them, etc.

We started trying to think of ways we could store them for them so they always knew where they were, they could keep them in good condition and could easily access them whenever they needed to.

We ended up buying them a 3-ring binder that zipped closed so that it was harder for things to get in that could cause damage to the cards such as water, dirt, and bugs if they were to be put in a storage area and also keep the cards from falling out and getting lost.

After purchasing the binder, we bought several of the clear, plastic trading card sleeves. They held three cards going across and three cards going down and there were slots on the back as well, so each sleeve held a total of 18 cards. These sleeves allowed for you to be able to see the cards, hold them in one place, keep them safe and also keep them organized.

We eventually ended up putting their cards in alphabetical order for them, so they could easily find whatever card they were looking for. We put the Pokémon cards first, then did trainer cards alphabetically and then the energy cards were last.

If they had more than one card, we would try and put them stacked into the same slot to save room if we were able to do so.

The only complication we really ran into with this system was alphabetizing them all over again when they would get new cards or trade some with their friends. The binder that they had also had zipper pockets in the back so we started having them put new and/or traded cards there and once they had several cards (enough to make the task of alphabetizing everything all over again worth it) that needed to be put away, we would reorganize them and start the process all over.

This system worked really well for us and our kids.

The kids loved being able to take their binder to school without worrying about losing or damaging them. They also liked the ease of knowing where each card was and not having to sort through hundreds of cards to find what they were looking for.

Several years later they still have their binder and cards, and they all look like they did when they bought them!

​In addition to the storage system that we used, there are also several other ways you can store your Pokémon cards.

There are clear storage boxes you can put them in, there are individual card sleeves, tin Pokémon card cases, top loading containers that are usually plastic or cardboard and as well as tons of other options.

​The important thing is to find a storage system that works for you!

You might not want to take the time to sort your cards out into each different type, alphabetize them and continually repeat the process over and over again, however many more times it takes. You might prefer to just throw them in a container where you know where they are, you have access to them, and you know that they are safe and that is okay too!