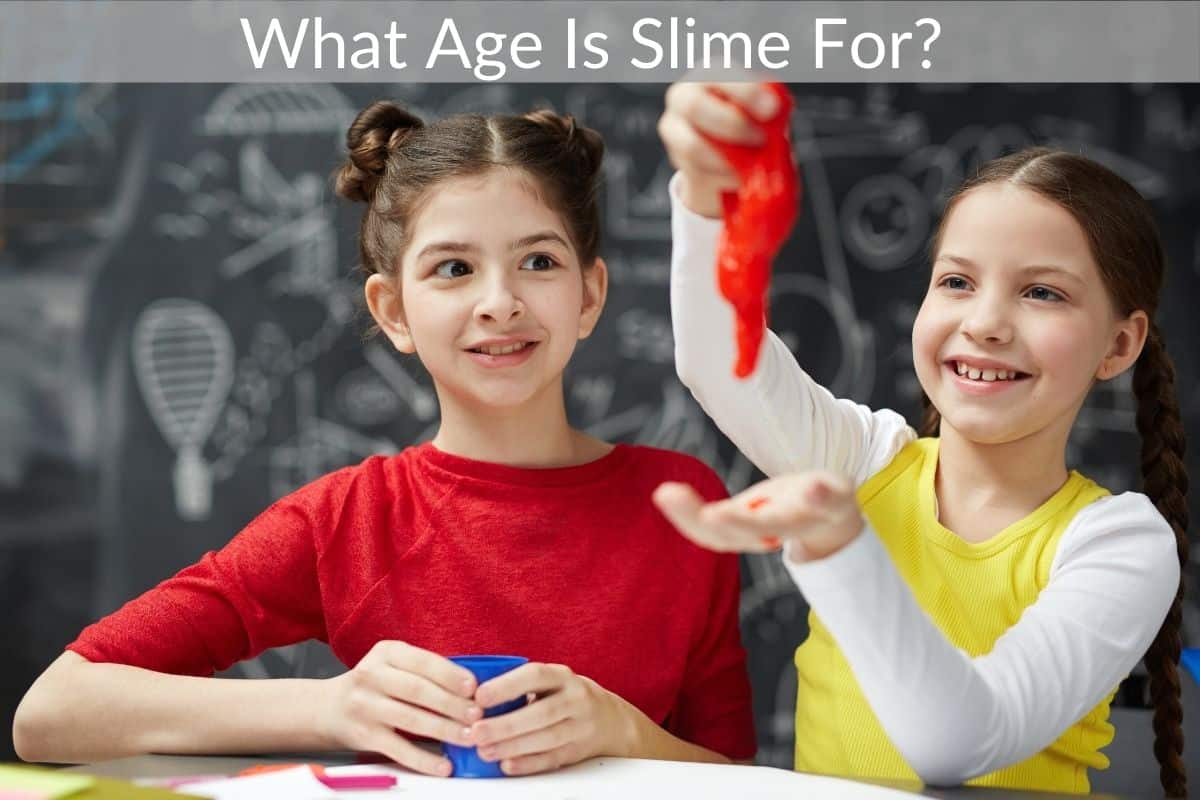 By now, the popularity of slime has been accepted by even those who once opposed it. However, the question regarding the safety of slime for kids is still debatable.

Though a registered toy under Mattel since 1976, from the late 1980s onwards, slime was mostly used for science experiments to teach kids about viscosity and the concept of polymers in school labs.

Some might debate in favor of the safety of slime due to its registration as a toy. But it should be noted that the laws in the US for children’s safety have become stricter since that time.

Slime has become a broad term since the world was reintroduced to it in 2016 in a viral internet video. Many people have come up with different slime recipes since then and the safety of slime now depends on the materials that were used to create it.

Even if slime is safe is there a certain age when slime should and shouldn’t be played with?

Most slime is safe to play with for kids that are 5 and older. The main reason that younger kids shouldn’t play with slime is that they may try to eat it, put it in their hair, or smear it all over their clothes or the furniture around them.

Once kids are 5 or 6 though they will begin to understand a bit better about not making a mess or eating the slime while they are playing with it so that can be a great age to introduce them to it.

If you have kids who are 2,3, or 4 you might be wondering why slime isn’t recommended for them. After all, they want to have fun too so shouldn’t you give them a chance to play with slime?

While slime can only be hazardous if ingested in large quantities, it is advised to not ingest it at all. Ingestion of slime can lead to severe health issues in children and adults alike.

While young children attempt to put anything they get their hands on into their mouth, most adults can also be tempted to ingest slime since it is mostly made with common harmless ingredients such as glue and water.

Some people can also be tempted to know what such a fascinating object tastes like.

These people forget that slime, though made up of safe ingredients, is still unsafe due to the inedibility of glue. Moreover, playing with slime makes it get exposed to many germs which can be very harmful to one’s health if swallowed.

It is also advised to avoid slime that contains borax.

Borax is a chemical compound and is commonly used as an effective cleaning solution around the house. It is also the compound that gives slime its fluffiness. Slime without borax can be flat and boring to play with.

However, borax is a toxic chemical. Exposure to borax can irritate the eyes or skin. Prolonged exposure of borax to the skin can also cause chemical burns.

If inhaled, borax can lead to severe coughing, sore throat, and even nosebleeds. Inhaling borax in large quantities can also cause shortness of breath, seizures, or other adverse effects on the nervous system. Ingestion of borax leads to even worse health effects.

The immediate effects of inhaling borax can range from sores and peeling of the skin to kidney failure and even death in some extreme cases.

Compromising on borax-free slime does not mean one has to compromise the fun that slime can be. There are many varieties of slime available on the market and online that don’t contain borax, are fluffy and are completely safe to play with for people of all ages.

Several slime recipes and homemade slime videos are also available on Youtube and Tiktok for those who want to try to make their own.

Slime can be included in playtime for children younger than 5 years. However, if other safer toys are available, playing with them should be preferred over playing with slime.

Kids in Elementary and Middle school can make the most use of slime. Playing with slime can help them learn movements of hands, wrists, and arms.

It will also help them understand the various ways of handling objects with different consistencies such as runny, slimy, and doughy among others.

If kids are into experimenting with everyday objects, playing with slime can provide a safe outlet for it and help them teach how things may or may not work together. The versatility of slime is what makes it interesting.

If kids ever run out of ideas, they can watch slime videos by their favorite creators to begin experimenting again.

For teens, playing with slime can help most through its sensory properties. Slime is a sensory object as it involves the sense of touch, sight, and hearing.

If mixed in with scents, slime can also tingle your nose. Teens can find playing with slime a focused and calming experience.

The teenage years can be a sensitive age as it is the age at which most individuals first feel the pressure of studying hard and succeeding in life.

Playing with slime can relieve some of this pressure from young teenage minds as slime, due to its highly sensory experience, can draw their attention towards itself and hold it too. These focused experiences promote mindfulness among teens.

As slime is an individual activity, regularly playing with it also relieves peer pressure among teenagers.

Adults can also benefit from playing with slime.

Like teens, they also feel various pressures from professional or personal life no matter what stage they’re at. Most adults also suffer from a work-life imbalance. Playing with slime can help them get away from some of the stressors in their life.

It can help them relax by making them focus on the play at hand (pun intended) rather than other things.

Since slime doesn’t fall apart despite being flexible, seeing it folded and stretched as you move your hands differently can bring a sense of control. This sensation can be especially helpful if one suffers from anxiety or overthinking.

The practice of playing with slime, especially when you are nervous can help you feel grounded and mindful of your presence.

The above benefits of playing with slime have led to its use in play therapy, where it’s being used to benefit people of all age groups. A great number of ASMR slime videos are also available on the internet. The popularity of these ASMR slime videos can be considered proof of slime’s ability to relieve stress.

If watching someone else play with slime can relieve stress through sensory tingling, then playing with it could prove to be even more helpful.