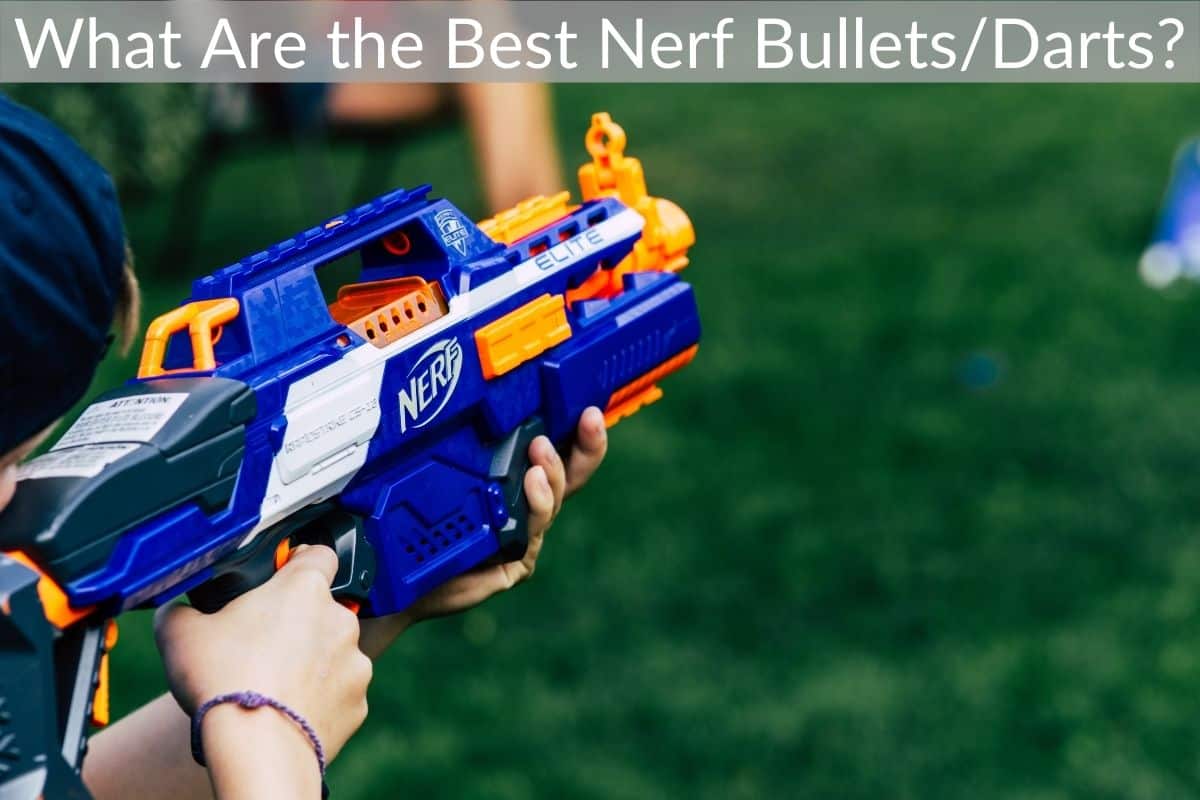 If you or your children will be playing with Nerf guns, it’s best to stock up on Nerf darts or bullets. After all, it’s no fun playing when you’re pausing to pick up the darts every few seconds. While you want to stock up for a fun game, you don’t necessarily have to buy Nerf brand darts.

I know that the slogan is “It’s Nerf or nothin’!” but third-party brands have come a long way, with some of the best darts on the market being from unofficial sellers.

That being said, not all Nerf darts are compatible with all Nerf guns, which makes buying ammo confusing.

When it comes to the best Nerf Darts, it depends on what you will use them for.z Those with younger kids may want to choose darts with hollow tips to prevent serious injuries. Others may want to get Nerf darts with hard tips.

While some people will want a packet of 15-20 darts, others may want to buy in bulk and get 200 darts at once.

I’ve rounded up the best Nerf darts available on the market today and which Nerf guns they’re suitable for so that you have all the information you need in one place.

Buy the right Nerf darts to make your next Nerf battle the best one yet.

Because I understand that everyone’s needs differ, I have made sure to mention various options for different budgets and needs.

These darts resemble Nerf’s “Accustrike” darts but are much more affordable. While these are third-party Nerf darts, they’re widely known to be more accurate than the official darts.

Because they’re made from hardened EVA foam, they can shoot even farther and make for better gameplay.

They’re compatible with most Nerf blasters and have a soft bullet’s head for safety reasons, making them perfect for children to play with. Since they come in ten different colors and a variety of sizes, they’re a great choice for any Nerf lover.

Since these are official Nerf darts, they’re more expensive than third-party versions. However, these have a special feature – they’re suction darts.

Unlike traditional Nerf darts, these darts come with a suction tip so that they stick to almost any surface. One of the most infuriating things about Nerf battles is shooting someone and pretending that the dart didn’t hit them.

With these darts, they can’t pretend it never happened since they’ll stick to your target!

These specialty darts are moderately priced but offer a special feature. They whistle when fired from a Nerf blaster.

In addition to having a range of more than 125 ft, they make for great fun since they whistle when they’re airborne and surprise your opponent.

That being said, these Nerf darts are highly accurate since they use Aerofin technology and should be used with caution.

These neon-green darts are an excellent option for Nerf gun lovers since they boast Smart Stick technology. If you have other BOOMCO products like blaster shields and targets, these darts will stick to them and show you exactly where you hit them.

Since they’re so bright, they’re also easy to spot, making cleanup all the easier.

Playing with Nerf guns is fun, but no one likes looking for the darts to clean up afterward. These bright darts stand out from the background and eliminate the hard work of chasing after Nerf darts after an intense battle.

They’re also easy to reload and come in a pack of 40 so that you can play for a while before having to look for the remaining darts and reloading them.

Since they come in bright colors, you won’t have to worry about losing them and finding them in some nook or cranny weeks or months later.

These darts work with all Nerf Elite blasters and most original blasters. Whether you have the Hail-Fire, the Modulus, Rampage, or Retaliator, these darts work on them all.

While the name may sound deceptively cute, these darts can truly pack a punch.

Their plastic, hollow tips mean that you can shoot them far and fast. Because they’re hollow, you don’t have to worry about seriously injuring someone and can have fun without the stress of having to be too careful.

That being said, the tip is made of plastic so that the darts shoot farther and shouldn’t be shot at young children.

Additionally, since the pack comes with 400 darts, it will be quite a while before you run out of Nerf darts.

These darts are great for adults and children alike since they have a foam tip that stops them from causing serious injury or damage. With 100 darts in a single pack, they provide a great bang for your buck.

In addition to being compatible with most Nerf guns, they’re known for being some of the best Nerf darts on the market and have even won the Best Dart Range Award for three years in a row.

Because of the light foam technology used, these third-party Nerf darts are some of the fastest I’ve seen.

I have picked some of the best Nerf darts on the market for this roundup and fully believe that any of the options I’ve mentioned above will make for an excellent Nerf battle.

However, your individual choice will depend on several factors and what you value more in a product.

If you want a large supply of ammo for a fair price, I would recommend the Little Valentine Darts for Nerf Elite Series since you get 400 darts for an extremely reasonable price.

However, if you want something that even the little ones can enjoy, I recommend the EKIND Waffle-Style Darts.

I’m also a big fan of other options like the NERF Ultra Sonic Screamers because they add something different to your traditional Nerf battle.

In the end, what you choose depends on the type of Nerf gun you have and what you’re looking for. I hope this guide helped you make your decision.