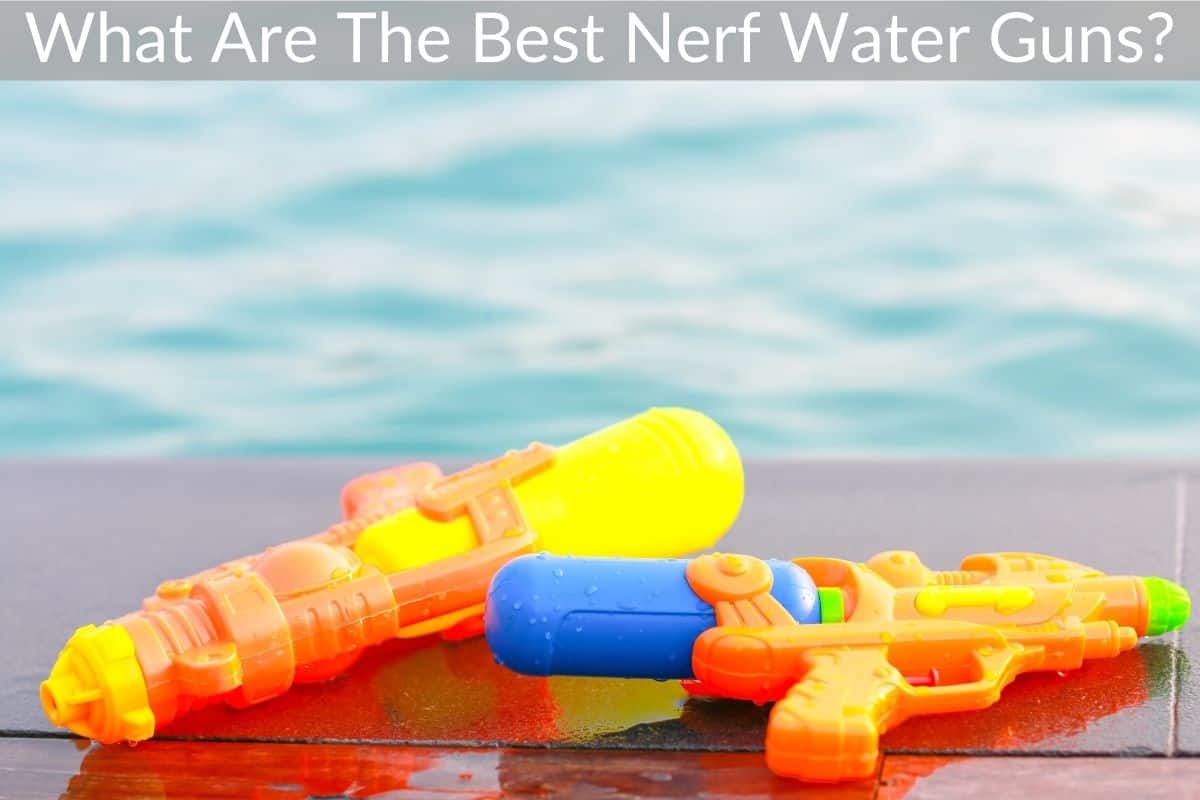 It’s that time again. The time when you have friends and family over for a cookout and some games. Then someone pops out the Super Soaker and starts a water gun fight.

If you have the water gun that shoots the farthest and holds the most water you are probably going to end up the victor. So what are the best Nerf water guns to have?

The best Nerf Water Gun ever made is the Super Soaker CPS 2000. Super Soakers are the most popular Nerf water guns and by far the best overall so you really can’t go wrong with any Super Soaker model.

It was even put into the National Toy Hall of Fame.

Nerf has created a variety of Super Soakers that work in a variety of situations. There is the Nerf Fortnite HC-E Super Soaker which is small for easy carrying but you may want to use this one as a backup or even consider double up with another for twice as many blasts of water.

Another Fortnite gun is the Fortnite TS-R Super Soaker that is easy to fill and easy to fire. Fans of the Fortnite game will notice that this water gun replicates a blaster used in Fortnite Battle Royale.

The Nerf Super Soaker XP100 Water Blaster has nostalgic vibes with its retro design. It can fire a constant stream of water with continuous pumping.

Then there’s the Nerf Soaker Freezefire that does what its title says. Its refill port can hold ice cubes making the firing liquid ice cold. Its simple pump operation supplies a constant stream of pressurized water.

Want a two in one option?

Then the Super Soaker DartFire is for you! This water gun not only fires H2O but also Nerf darts so you can fire water at your friends and then finish them off with foam darts too!

What Is The Biggest Nerf Water Gun?

Oh yes, the “big” question. Literally. The heavy duty water gun that will wipe out your opponents with its vast supply of water. The biggest Super Soakers out there.

Let’s start with the Soakzooka.

This Big and Bulky beast is massive and the Soakzooka can hold 55 fluid ounces of water and can shoot up to 25 feet. Bringing out this gun will surely make everyone run to get out of sight of the torrential downpour that will quickly be thrust upon them.

Then there’s the Hydra. True to its aqua related name this Super Soaker can hold 65 fluid ounces of water and can fire at a distance of 25 feet or more depending on the force you pump it with.

Drench your friends with water using this crazy cool blaster.

What Super Soaker Holds The Most Water?

Want the Super Soaker with the most water storage? This will mean less time refilling your water gun and more time conquering on the battlefield.

The Super Soaker CPS2700 with its huge design holds the most water out of all the Nerf water guns. But watch out as this blaster will require a lot of muscles in order to use it.

Holding a whopping 4 liters (that’s 133.33 ounces) in its reservoir and 800 ml (26.7 ounces) more in its pressure chamber, this big gun seems to never run out of liquid ammo.

If you want the longest lasting weapon with zero to no refill time choose this awesome gun for your next water gun fight and you will be unstoppable.

This powerful water gun has a constant pressure system and can shoot extreme streams of water. It also has three powerful nozzle settings so you fire at 2x, 5x and even 10x! For a massive boost of aqua ammo choose this blaster for your next water gun fight.

How Much Money Did Super Soaker Make?

In 1989 Lonnie Johnson invented the popular Super Soaker. He used a PVC pipe, acrylic glass, and an empty soda bottle for his new toy and the rest is history.

Now Super Soakers are a part of kids’ lives everywhere resulting in countless hours of outside summer fun.

Nerf has made over $1 billion in sales from the Super Soaker over the years. With millions of them sold each year since.

In an interview for an article, Lonnie Johnson replied to the inquiry about how he came up with the idea for the super soaker by saying,

“I was always tinkering. I was working on a new heat pump that used water instead of Freon because Freon is bad for the environment. I was experimenting with nozzles I’d made that shot a stream of water across the bathroom and I thought they’d make a good water gun.

I was having trouble getting people to understand the hard science inventions I had like a heat pump or the digital measuring instrument. I thought the toy was something anyone could look at and appreciate.”

Children everywhere are enjoying a water fight in the backyard of their homes today all because of Mr. Johnson.

Due to aggressive advertising for the Super Soaker product, they sold 27 million guns in the first three years of the water guns release, selling them at $10 each. While prices of the toy have increased a little over the years, its fame has never been quenched.

With many options of water guns it is hard to go wrong when you choose a Super Soaker. You can have your pick from the biggest blaster to the one that holds the most water.

So put down that useless Dollar Store water squirter and pick up a Super Soaker.

Known for their distance, range, and accuracy, they are a blast for water gun fighters everywhere. No matter your age you can have a good time cooling off in the summer heat with a good old fashioned water gun fight using these awesome Super Soakers.