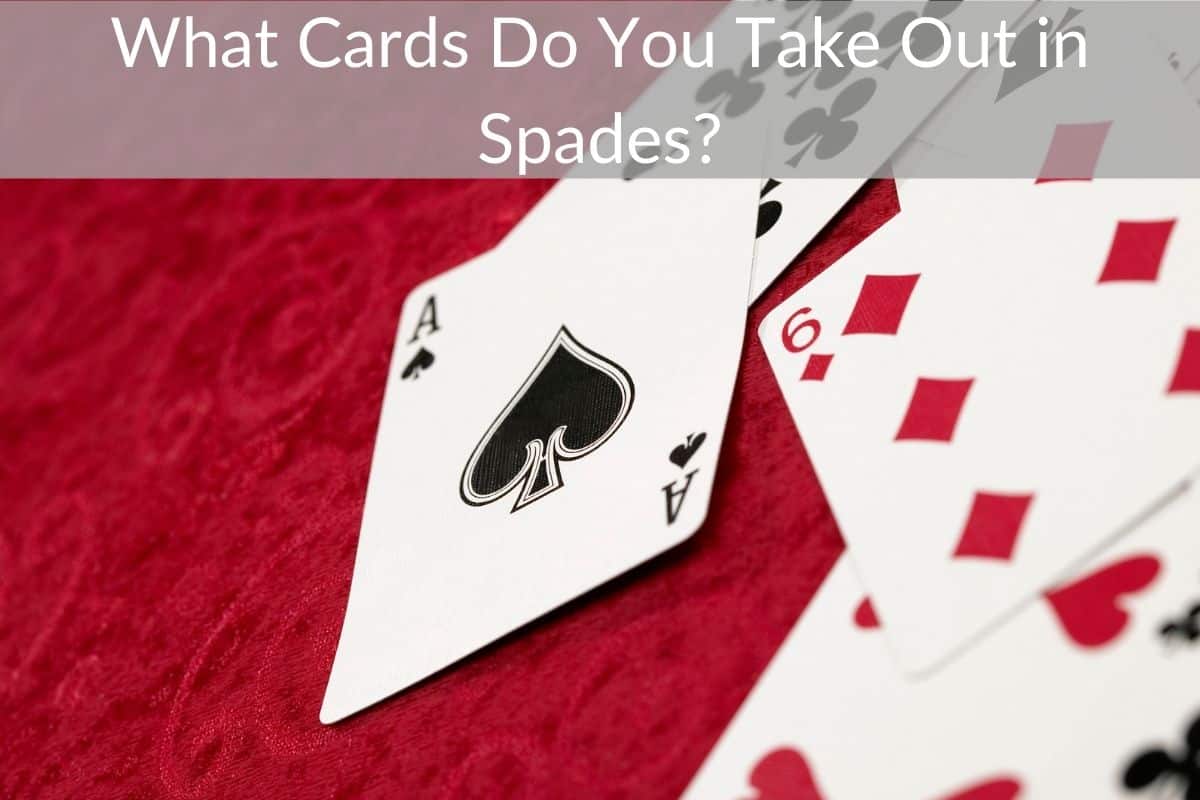 Spades is a four-player strategic card game of skill, tricks, and luck. If you are trying to set up a game of Spades but can’t remember which cards to remove then this article is for you.

Spades is usually played with a regular 52-card deck, with the two of clubs and the two of hearts removed. In other variations, for six players, a deck of 102 cards is used and you take out the two lows of either clubs or diamonds.

Spades is played with Aces high, twos low, with Spades prevailing over all other suits. The game uses 52 card decks for three players, giving 17 cards to each and removing the other cards.

The goal is to win as many “tricks” bids as possible. It is most commonly played as a partnership play for four players, although there are additional variations for two, three, and six people.

To see the most popular card games just click here.

Spades was created in the 1930s in the United States and is still commonly played here today. It was barely recognized outside of the United States until recently, other than a few locations where American forces were positioned, such as portions of Germany.

However, since the late 1990s, Spades has gained international popularity due to its simple accessibility in online card games on the Web. The development of online gameplay and competitions has also resulted in some rules unification.

This article has been updated to ensure that the primary rules complies with the standard.

Below is the basic explanation about rules and tricks. It can be a bit tricky so watching a video (such as the one below) will help you out a lot.

There is a mixture of different versions that are still popular in face-to-face card games with different Spades card game rules, and I will walk through it so you can have more fun and play the version of your liking!

As I mentioned before, this game has variations for two, three, and six players as well. However, I will be explaining the game from the standard four-player perspective:

These four players will be seated in permanent pairs, with the partners facing each other. Dealing and playing are done in a clockwise fashion.

To begin the game, an initial player, also known as the dealer, is picked randomly, from where the turns go clockwise. They shuffle the cards that are then dealt individually, clockwise, starting from the player on the dealer’s left side, until every player gets thirteen cards and all 52 cards are dealt.

In the game of Spades, each of the four players bids a variety of tricks. Each team brings the bids of its two partners, where the total represents the number of tricks the team must attempt to win in order to receive a good score.

Bidding starts from the player sitting on the left side of the dealer and moves clockwise from there and around the board. Everybody will have to bid a number, which can be any number between 0 and 13.

Unlike some of the other bidding games, there is no necessity for each offer to be greater than the previous one, and players are not permitted to pass. There is only one round of bidding, and bids cannot be changed after submitting them.

Nil is the name given to a bid of zero tricks. This is a proclamation that the person who bet Nil would not win the tricks throughout the game. If the bid succeeds, they get an additional bonus; if the bid fails, they will be charged a penalty.

The competing pair will also be aiming to win more tricks than what Nil’s partner has bid on. There is no way to bid zero tricks without also bidding for a Nil.

Unless you do not wish to take the Nil reward or penalty, you should bid at least one.

A few gamers include a blind nil bid, a zero offer made even before the player has looked at their cards. And only those players who are 100 points behind the other team can bid on it.

Once every player has bid, there is a chance for the bidding team. Before beginning the initial move, the bidder can swap two cards with their partner. The bidder throws away two face-down cards; the partner takes them back and returns two faced down cards.

According to Spades’ rules, “Breaking Spades” is the act of playing the very first spade. The player on the left side of the dealer leads with a card other than a spade to the first trick. Every player, in order, will follow suit if they can; however, they can play another card if they cannot follow suit.

If a trick contains a spade, the biggest spade thrown wins the trick; when no spade is thrown, the highest card of the led suit wins the trick. Every trick’s winner proceeds to the next. Spades will not be led unless one of the following conditions is met:

• The leader just has spades remaining in his hands.

Spades card game rules are very specific but tricky so clear your mind before reading this section.

The team that performs as many tricks as their bid specifies earns a score that is ten times their bid. Every extra trick (overtrick) adds a score of one point.

You will use the term “Bags” as a reference for the overtricks. The side that acquires ten bags for many deals loses 100 points. Any bags which exceed ten are passed to the next ten overtrick’s cycle.

So when the team makes a total of twenty bags, another 100 points are deducted from their score.

If a team fails to raise its bet, 10 points will be deducted for every trick bid.

Now that you know the Spades card game rules, all you need to do is get your desired number of players, bid, and win!