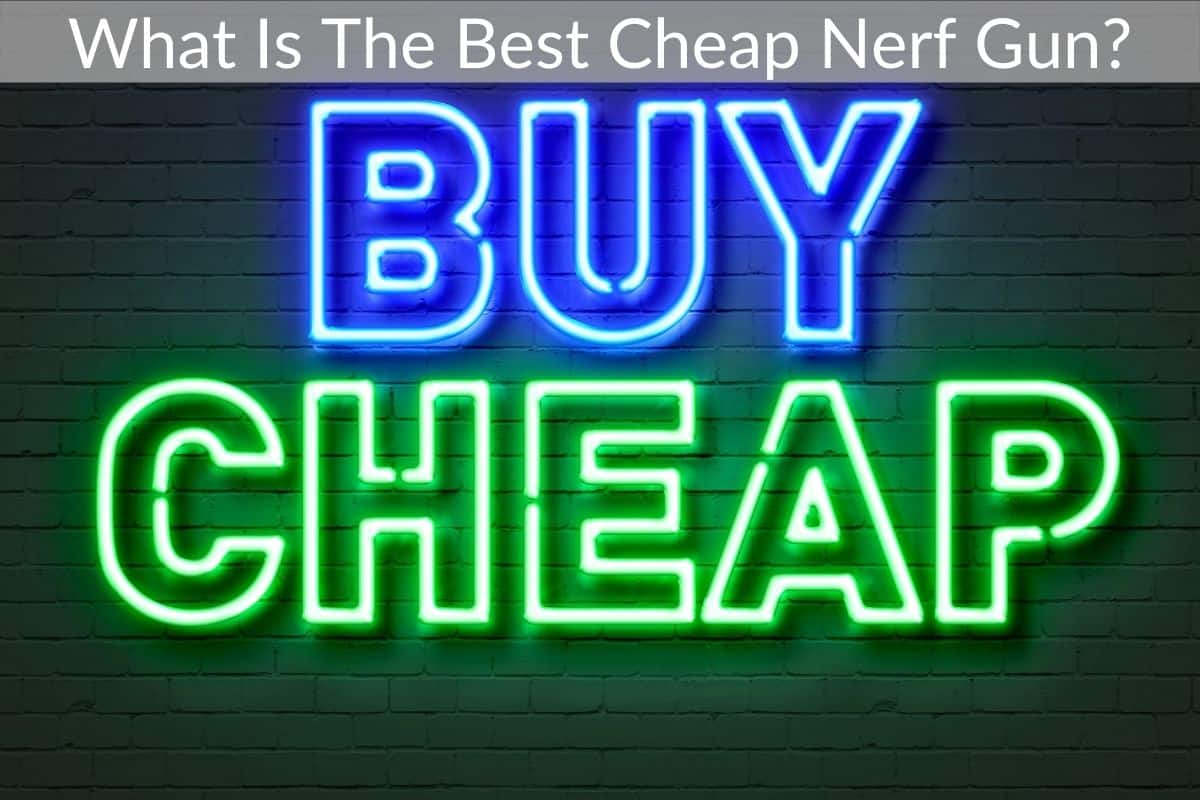 Are you or your children nto Nerf but on a budget?

Are you trying to beat the need to buy the latest and greatest Nerf gun out there?

If you are budget conscious or just don’t want to spend a fortune on a Nerf gun that you know will get broken by your kids then you are in the right place.

Now, everyone has a different definition for cheap, so before we get into it, we will set the word cheap at anything below $50. If you want the absolute cheapest Nerf guns available you can find those by clicking here.

Below are some of the best Nerf guns that you can buy on a budget.

The Nerf N-Strike Elite Strongarm Blaster is a very affordable Nerf gun and is one of the best options when you are on a budget.

This Nerf blaster has a great option for slam firing in those moments that you need rapid fire and the rotating barrel also allows for quick and easy loading.

This bad boy can hold up to six darts and shoots up to 75 feet.

You also don’t have to worry about it weighing you down in battle as it only weighs 1.17 lbs. You can find this amazing Nerf gun for $20-$30 at most stores.

My next favorite budget Nerf Gun is the Nerf Zombie Strike Flipfury Blaster, this blaster is probably the best cheap Nerf gun overall.

With a range of up to 84 feet, this blaster comes with two rotating drums, each holding six darts (that’s twelve darts total!)

This Nerf gun is also lightweight, weighing only 1.6 lbs and it is also available for $25-$35 at most local stores.

The last item on the list is the Nerf- Fortnight AR-L Elite Dart Blaster. Priced at around $30-$40 this video game inspired mid-range Nerf gun comes with easy reloading, a ten dart holding chamber, and a range of 63 feet.

It will need batteries to operate, but it also includes two flip-up sights to help improve accuracy, as well as an acceleration button that boosts power. The weight of this blaster is 3.84 lbs, so you can expect a little bit holding you down.

These are just a few of the top rated cheap Nerf guns for anyone who is trying to Nerf on a budget.

While there are still many more out there, I encourage you to do your research and set your budget of how much you think cheap is and work off that.

This list is just my definition of cheap (under $50).

Happy shopping to you!

What Is A Good Beginner Nerf Gun?

Your child might be getting to that age when they want to start their Nerf gun collection, but where do they start? Of course finding a Nerf gun that is good for beginners is a great place to start.

A couple of good Nerf guns for beginners are the Nerf Nanofore and the Nerf N Strike Elite Strongarm. Both of these are relatively inexpensive and are manually loaded Nerf guns.

If the Nerf beginner is a younger child you will want to start with a manually loaded Nerf gun such as one that holds 3-5 darts as that will be less confusing. If the beginner is a bit older (8-10 years old) then any Nerf gun with a clip or hopper would be fine as well.

There are many things to consider for those that are starting off in the Nerf realm. Here are some additional tips and tricks to remember when buying that first Nerf gun for your child.

Your child will probably be about five or six when they get their first Nerf gun, and they will need something that won’t be too heavy for their tiny arms. If you get a massive Nerf gun for your 5 year old they will likely let it sit because it will be too heavy or complicated for them to use.

The next thing you need to consider is the ease of loading. The simpler and easier a child can load their Nerf gun, the more they will probably enjoy it.

Some Nerf guns have darts, some have foam balls, and some have larger darts. How hard or easy it is to load these darts/balls is a big factor to consider based on your child’s age.

There are aftermarket darts and genuine Nerf bullets; the aftermarket ones are cheaper but are often made with heavier and harder tips which would be fun for an adult, but would probably be more painful for a small child.

The next thing to keep in mind would be the dart quantity. Kids are kids, and they lose things, darts are very easy to lose so you are going to want to have plenty of extra on hand.

The theme of the Nerf gun should be something that your kid will love. There are Nerf guns that are based on your child’s favorite TV show and that is something that will make them love it even more.

So if your child has a favorite character, game, or show check and see if Nerf has a blaster with that theme.

What Is The Fastest Firing Nerf Gun?

For those veterans of all things Nerf, you may like this. You’ve gotten bored of the small one-shot guns that may help in battle, but just can’t get you the win. You need something that will shoot not necessarily accurately, but fast enough to throw your opponent off guard and grab you that win.

The fastest shooting Nerf gun right now is the Nerf N-Strike Elite HyperFire Blaster. This bad boy is fully motorized and unleashes up to five darts per second with fresh batteries.

Simply press the acceleration button and pull the trigger; the Nerf gun will do the rest for you.

Not only does it shoot fast, but it shoots far. The blaster has a range of ninety feet, so your opponent won’t even see it coming, and they won’t even be able to see you.

While they are scrambling to figure out what is happening, you will have won the battle without even breaking a sweat. This blaster has a 25 dart drum as well giving you a good amount of ammo.

While it’s all fun and games, this blaster is no joke. This is the real deal.

One thing about this fastest shooting Nerf blaster is that you will need to have some batteries, and you must make sure that they are in good condition before going into battle.

You would not want your best weapon to die on you in the heat of battle simply because you forgot to get some fresh batteries.

Are There Even Cheaper Nerf Guns? (And Where Do I Get Them?)

We already discussed Nerf guns under $50, but are there even cheaper guns out there? There has to be something even less than $50 but where can you find it?

You are correct, there are Nerf guns that are even cheaper than that $50 that we discussed earlier.

My favorite place to shop would simply be online, you can get used, new, and refurbished ones for quite cheap. My go to place for Nerf guns, bullets, and accessories is Amazon.

The best place to go for cheap Nerf guns is absolutely Amazon. With their gigantic variety of Nerf (or generic) blasters you can easily find a Nerf gun that will fit any budget.

There are many different options, from Nerf to off-brand toy guns and they can range from $5 to several hundred dollars so you can absolutely find the perfect one for you.

The most popular Nerf guns under $20 can be found by clicking here.