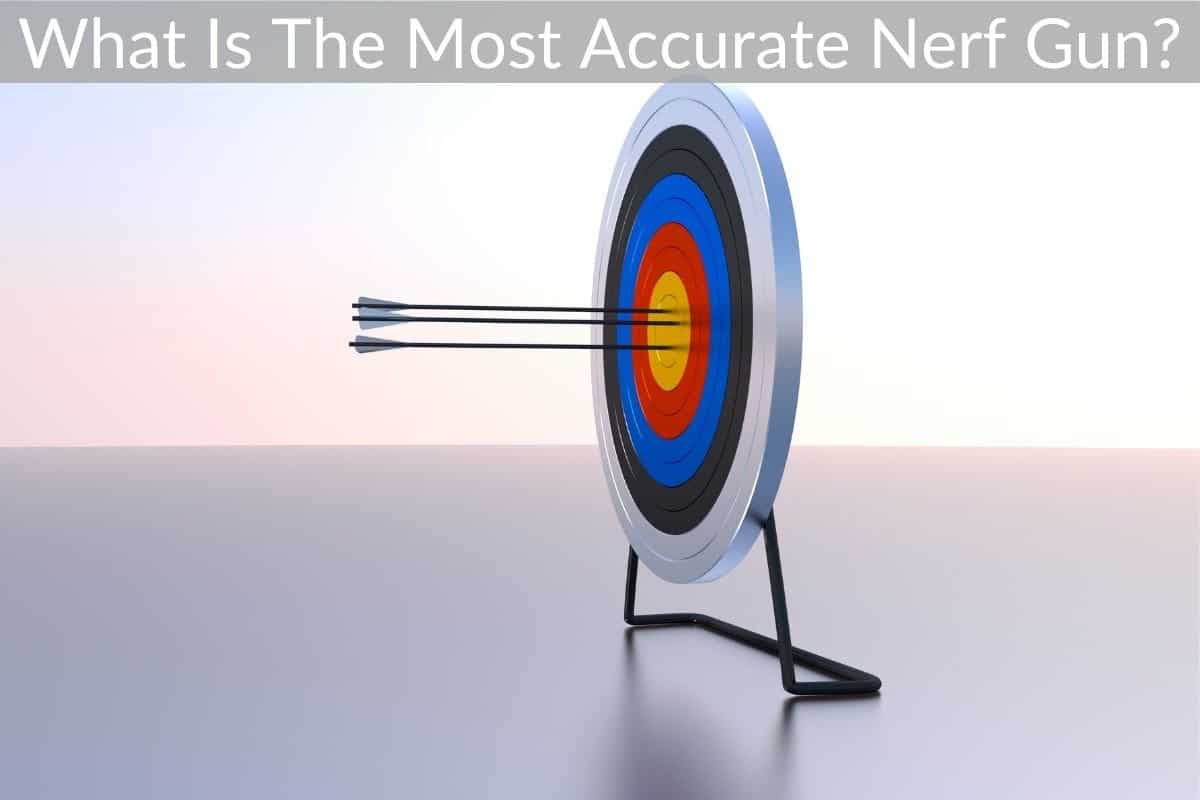 Nerf guns are one of those toys you will likely never grow out of. They aren’t just used by kids as both teens and adults also enjoy a good Nerf war.

Want to find the right Nerf gun for you? Do you want accuracy and precision when targeting an opponent on the battlefield?

According to many reviews the Nerf Rival Artemis XVII-3000 and the Nemesis MXVII-10K are the most accurate Nerf guns currently on the market.

With the Artemis firing approximately 100 feet per second and all of its special features it is considered one of the best Nerf guns for accuracy.

Although some would argue that the Nemesis MXVII-10K is the most accurate.

The Nemesis blaster shoots balls rather than darts and with its hopper (ammo holding device used for ball blasters) can hold up to 100 impact rounds. Like the Artemis it can also shoot up to 100 feet per second.

As the website Fatherly described it in their article on the best Nerf guns, “With its 100-round reservoir, which is fully motorized, it lays down a thick blanket of foam, overwhelming everything in its path. How’s that for accuracy?”

To get the most accurate Nerf guns currently available just click here.

What Nerf Gun Is Best For Sniping?

There are many Nerf guns that are great for sniping the enemy but the Nerf Centurion Mega Toy Blaster seems to always come out on top.

Of course some people prefer other models so I’ve listed a few of those below.

Some of the best sniper Nerf guns include:

All of these blasters are perfect for sniping during a Nerf war. They even have great accuracy as well.

if you’re looking to shoot from a longer range, the Centurion is considered one of the best sniper rifles. This blaster has a recoil effect and does not require you to manually pull back the bolt before you reload it.

Though discontinued now, it still can be found online on Amazon, Ebay,etc.

What Is The Hardest Hitting/Fastest Shooting Nerf Gun?

Nerf guns do not hurt you when you get hit and they aren’t meant to. Playing with Nerf guns is a fun activity and its foam darts are designed to be soft.

But there is a blaster that fires its darts at such a fast speed that it would be considered the hardest hitting Nerf gun.

The N-Strike Elite Rhino-Fire Blaster is both the hardest hitting and the fastest shooting Nerf gun that has ever been produced.

The Rhino-Fire blaster is a motorized rapid double barrel blaster that can rapid fire for a range of up to 90 feet! So if you want the fastest firing gun on the course this is an excellent choice.

What Is The Most Powerful Nerf Gun?

Accurate Nerf guns are nice, and fast firing guns are cool, but we all have to admit that powerful guns are awesome!

Huge and firing up to 90 feet per second at a rate of 5 darts per second the Nerf N-Strike Elite HyperFire blaster is the most powerful Nerf gun currently on the market.

This Nerf gun has a conveyor system that feeds darts into the flywheels making a rifling effect when fired and not only producing power but increasing accuracy as well.

It’s not only fast but accurate and powerful? Sounds like the perfect weapon for a Nerf battle.

In all of my research, the Elite series of Nerf guns all seem to have the most power. But since there is such a variety of Nerf guns you can choose whatever gun is right for you!

Released in 2018 under the Phantom Corps sub-series this pump action blaster holds 60 rounds and  can be slam-fired meaning it allows darts to fire faster than most other Nerf blasters.

Released in 2017 under the AccuStrike series, this blaster’s darts were designed for accuracy. It features a 6 dart clip and flip up sight for targeting.

Also being released in 2017 under the AccuStrike series this blaster comes with 6 foam darts but is also compatible with the Elite darts. Iron sights give this blaster great precision.

Released in 2015 under the N-Strike Modulus series, this motorized blaster includes a removable targeting scope, dual-rail barrel, and 10 Elite darts for customization.

Released in 2006 and now discontinued, this blaster was known for its barrel extension, and folding bi-pod legs which are helpful when its at full length.

Released in 2018 under the N-Strike Elite series, this speed loading blaster mechanically feeds darts into the chute located at the top and also features a barrel extension.

Released in 2017 under the AccuStrike series this is a revolver style blaster. It features a drop down cylinder and offers precision and accuracy.

Released in 2018 under the Survival System sub-series this customizable blaster can be slam fired. It also features a barrel extension and a scope for accuracy.

Being released in 2018 under the Ghost Ops sub-series this blaster has barrel extension,12 Elite darts, and rapid fire motorized blasting.

Released in 2017 under the Rival series this blaster comes with 30 high impact rounds. Featuring a rotating front turret system it can be slam fired for a higher rate of fire.

There are alot of great Nerf guns you can have your pick from to get that accurate shot you need in the midst of your Nerf war. If you want to be the best player out there, you’ve got to have the best gun, and what better gun to have than one with extreme accuracy?

From accurate to fast and powerful, Nerf has made many incredible blasters over the years. Choose which one is perfect for you and have a “blast” with your group of Nerf warriors.