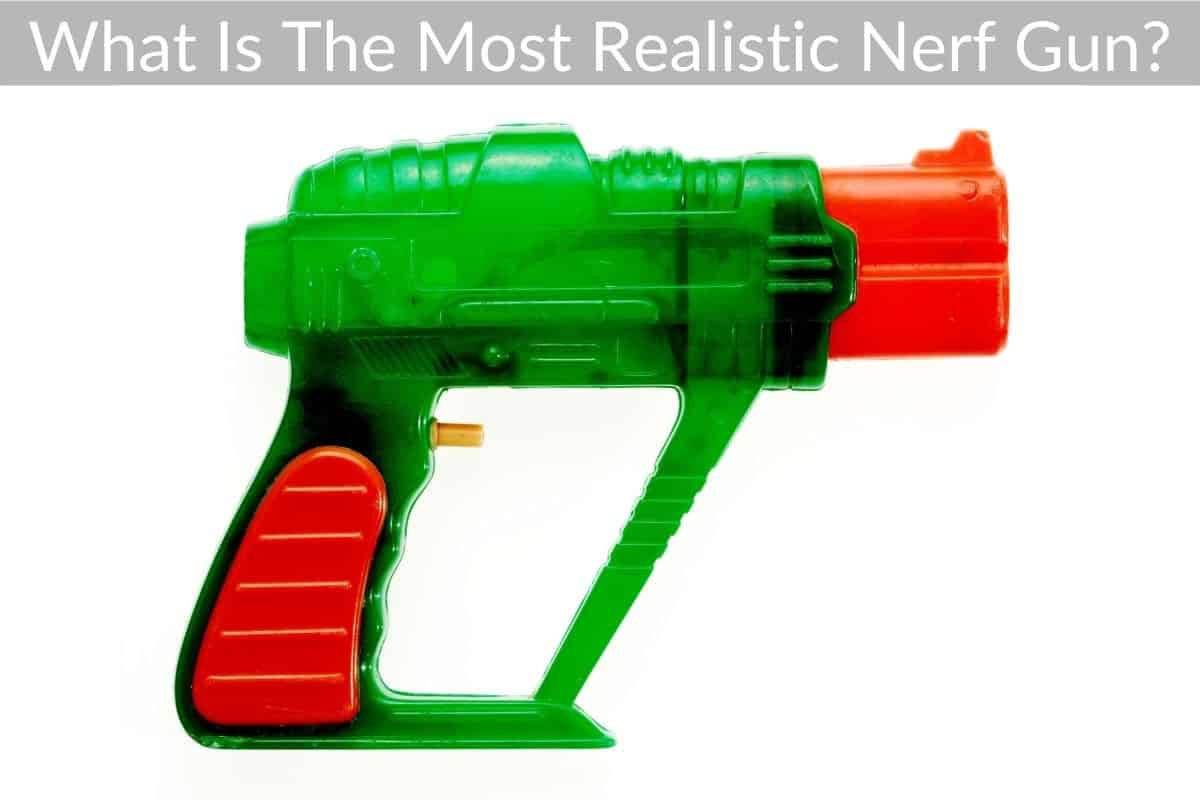 Nerf guns are the most popular of foam dart guns so much so that other brands of the blasters are even referred to as “Nerf” guns. The company makes some pretty awesome toy guns and now even have some of the most accurate and powerful blasters.

Keep in mind that these toys are just toys. They aren’t meant to look exactly like a real gun and definitely aren’t able to hurt anyone unless seriously modified.

There are no Nerf guns that look realistic and they don’t look realistic on purpose. They are toys for playing and having fun and if they looked real that could be dangerous to the kids or adults playing with them.

The Nerf N-Strike Elite Retaliator Blaster is said to give the user the most realistic combat experience. It features a stealth mode and four configurations so you can choose how and where to use the blaster.

With its barrel and removable stock extension, it also has a handle and a vertical fore-grip. It offers precision and accuracy when fired reaching up to 90 feet in distance.

It is a great Nerf war weapon for older kids and teens.

If you are interested in a more accurate Nerf blaster, the Nerf Rival Artemis XVII-3000 and the Nemesis MXVII-10K are the two most accurate Nerf guns.

With the Artemis firing approximately 100 feet per second and all of its special features it is considered one of the best for accuracy. Although some would argue that the Nemesis MXVII-10K is the most accurate.

The Nemesis blaster shoots balls rather than darts and with its hopper (ammo holding device used for ball blasters) can hold up to 100 impact rounds and like the Artemis can shoot up to 100 feet per second.

Nerf guns are just toys and they don’t make any that look real.

Parents are concerned enough about guns and some about letting their children play with toy guns so why would Nerf want to add that as a possible issue to their toys?

The Nerf company is extra careful to make their blasters look like the toys they are so they don’t get confused with real guns.

Nerf guns do not hurt you when you get hit and they aren’t meant to either. Having a Nerf war is a fun activity and its foam darts are soft.

Because it fires at such a great speed, there is a blaster that would be considered the hardest hitting Nerf gun, however even it should not hurt more than a little bit.

The N-Strike Elite Rhino-Fire Blaster is both the hardest hitting and the fastest shooting Nerf gun currently available.

This awesome blaster is a motorized rapid double barrel blaster that can rapid fire for a range of up to 90 feet!

Any player on the Nerf battlefield will be lucky to own this blaster. They will be able to take out their opponents in one swift shot.

So if you want the fastest firing gun on the course this is an excellent choice.

Nerf guns do not fire as hard as even airsoft or BB guns and are a fun toy to be played with and are not designed to hurt people.

But if you want a more “realistic” Nerf experience the Rhino- Fire Blaster is a good option.

What Is The Best Nerf Gun For Sniping?

You are high in your fort. You spot your opponents down below and have them dead in your sights. You know it will be a perfect shot and you hope your blaster will have enough distance to tag the enemy out.

If you have the right Nerf gun, you won’t need to worry about how close you are to the target.

There are many Nerf guns that are great sniping blasters, although the Nerf Centurion Mega Toy Blaster is considered the best of them all.

Nerf makes so many sniper guns now that you will have a hard time choosing which one you like the best.

Some of the best sniper Nerf guns include:

All of these blasters are perfect for sniping during a Nerf war. They have great accuracy and if you’re looking to shoot from a longer range, the Centurion is considered one of the best sniper rifles.

This blaster has a recoil effect which doesn’t require you to manually pull back the bolt before you reload it. Though discontinued now, it still can be found online on Amazon, Ebay, etc. though at a higher price because of its rarity.

Since Nerf makes a lot of great blasters, there are a lot you can pick from. You can’t go wrong with one of their long distance, foam firing weapons.

Modification is tampering or changing the blasters or darts in order to get greater ranges, rate of fire, etc.

Cosmetic changes are also a part of modifying.

Painting over the identifying red/orange tip of the barrel is something you should never do because that colored part is what makes the toy recognizable as a toy.

It is not illegal to modify Nerf guns unless you are using live firearm ammunition or explosives.  So if you keep the toy aspect without making it dangerous, then modifying is perfectly ok.

To just modify your blaster to create a better version is not illegal. However, if this involves making the Nerf gun dangerous you are not allowed and should not do so.

This can be harmful to you or those around you.

According to Chicago News some people have been adding dangerous items such as needles to their foam Nerf darts among other harmful mods on their blaster and this is a dangerous thing to do.

You may hurt someone and/or yourself.

With gun violence at the forefront of most people’s minds, many states will not allow you to bring a Nerf gun into public buildings for safety reasons. It is nothing personal, just measures to keep everyone safe.

So you can stick to enjoying your Nerf gun in the privacy of your home, yard, or at the park. Some cities even have a place built just for Nerf wars like a Nerf Arena!

Carrying a Nerf gun in public is illegal if it can be mistaken for a real weapon. They are also prohibited on an airplane.

Have you ever wanted to pretend you were a spy? I’m sure most of us have. We pretend to  run about the city on secret missions while carrying your secret firearm.

Since Nerf guns aren’t realistic you may have even thought about acting out a secret mission with your friends holding a Nerf gun by your side. This may sound fun to you but it may not be so fun to other people around you.

Plus if this fantasy is carried out by an unruly person and they shoot other people with their Nerf darts it could be considered assault.

Speaking of safety, a Nerf gun should never be shot at very close range at someone’s face or eyes. If you are hit at a very close range directly at your eyes then you could possibly be seriously injured.

It is a good idea to have your child wear eye protective gear such as goggles when playing with their Nerf guns.

Stay safe while playing with Nerf guns. There are no Nerf guns that look realistic because they all look like toys. Toys that are not meant to be harmful and dangerous or to even look like a real gun.

They are a form of entertainment and fun with friends. Kids and adults everywhere enjoy Nerf wars and foam dart battles.