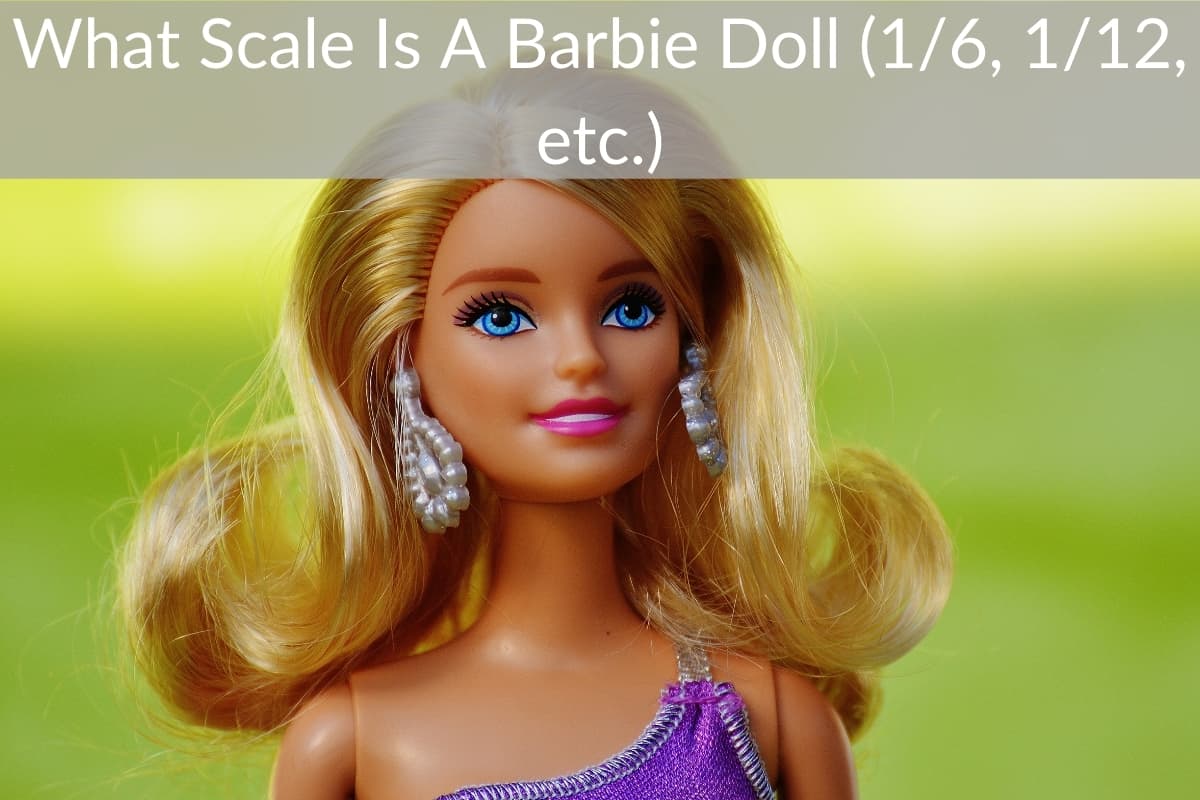 Before we delve into what scale a Barbie doll usually is, let us first take a look at why scale is important. We see everything and put that into perspective with other things.

We see everything in a room with respect to other things, us and then any other people. So, if anything is disproportionate, our eyes catch that immediately.

So, if you have a cute, tiny Barbie doll, most likely you’ll want to play with it and even place it in a dollhouse and if you don’t know the size of them, it can cause a proportions mismatch very easily.

That is why knowing the scale of your Barbie is very important.

Knowing the scale of your Barbies can also help when looking to buy accessories or clothes as often those are categorized by different scales.

Barbie dolls are typically ⅙ scale however some of the special edition dolls that are designed as “kids” will be smaller in inches while still being the same scale.

Considering Barbie to be of average height, Barbie dolls are standard scaled-down versions, which has a standard playable proportion, albeit larger than most other miniatures/dolls.

In this article we will be looking in more detail at what scale a Barbie is, but before that let’s look at all the different kinds of miniature doll sizes and scales.

To see the most popular Barbie dolls currently on the market just click here.

Miniature dolls including Barbie dolls are made on a standard size worldwide. The sizes are expressed as a scale, which refers to the ratio of the size of a miniature doll to an object in real life.

During the early 20th century, manufacturing of miniatures started to follow standard scale.

The most common miniature scale used to be 1:18 back then, which is rarely found now. It meant, a one foot object in real life was scaled down to ⅔ inch, when miniaturized.

Now, nearly all miniatures are of standard scale with 4 of those being the most popular scales.

The largest doll scale, which is also called the fashion doll scale. While the size started with G.I. Joe dolls, all the Ken, Barbie and several other popular kid’s dolls are of this scale.

This size is easy to grasp and play with for kids.

Also known as one inch scale, this is the most common doll and dollhouse scale. This is easy to work with, largely available with the majority of doll collections falling under this scale.

This is also preferred by miniature doll and dollhouse collectors.

Alternatively called the half inch scale, this size used to be popular in the 1950s and has now come back with renewed interest among fans of miniatures.

These dolls are normally cheaper than 1:12 scale , but harder to find.

This is also called quarter inch scale, which is popular among diecast models, construction toys and other plastic models which are made from kits.

Most, if not all, Barbie Dolls are of the same scale.

They are usually in 1:6 scale i.e. in “Playscale” or Fashion Doll Scale.

A standard Barbie doll is 11.5 inches, which means, at 1:6 scale the height of Barbie is 5 ft 9 inches(including heels). All full size Barbies are in 1:6 scale making them one of the largest production dolls.

As all the normal Barbie dolls are produced in this scale, it is also called Barbie scale.

In this scale, 1 inch equals 6 inches in real life.

Although this is the standard scale used by Mattel for Barbies that doesn’t mean that all Barbies will be the same size. When a Barbie that is smaller is made (such as a child or Barbie’s little sister) the scale will typically still be 1:6 while the doll will be smaller.

How Tall Is A Barbie Doll?

However in modern times manufacturers are also making Barbie dolls with a height of 12 inch.

Are All Barbie Dolls The Same Size?

All Barbie dolls used to be the same size i.e 11.5 inches at 1:6 scale. This includes the high heels that Barbie wears. That is why everyone believes Barbie has a real life height of 5 ft 9 inches.

However, if we separate Barbie’s heels and then scale them up, the real life size of Barbie comes to 5 ft 10 inches.

However, with society trying to be more inclusive, the manufacturer has started producing more diverse Barbie dolls.

All of them are not of the same size and shape anymore and the iconic Barbie doll now comes in 4 different shapes and sizes.

There are now petite, tall and curvy Barbie Dolls in addition to the original Barbie doll. They even have different hair and skin colors to be more in line with real women.

What Size Is A Barbie Dollhouse?

The Barbie dollhouses are normally quite large, and they can accommodate all the different fashion dolls that children will play with. They also come with proportionally sized furniture and appliances so that the dollhouse looks complete and livable for Barbie.