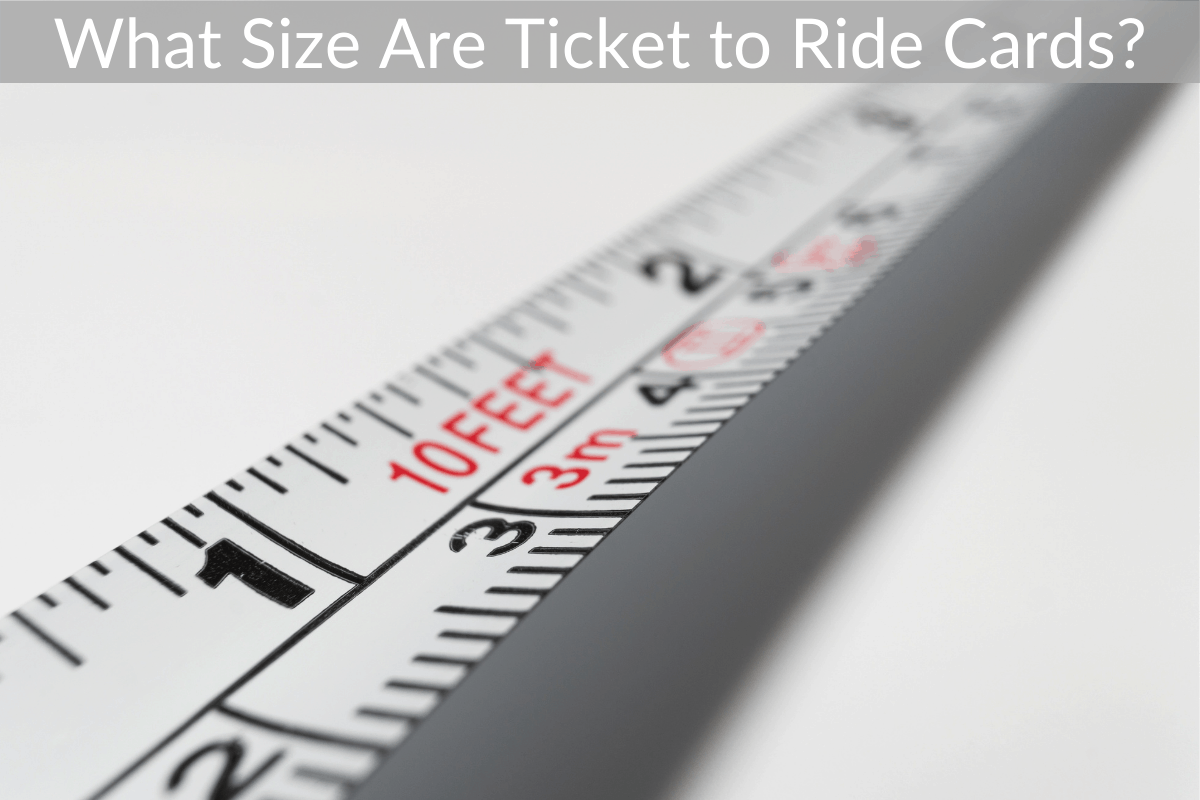 Ticket To Ride is an amazingly fun board game that has continued to grow in popularity since its release. One downside to the original Ticket To Ride game is the size of the cards but what size are they exactly?

Ticket to Ride cards are approximately 1.75” x 2.75”. Because of the small size of these cards many players find them extremely difficult to shuffle. So some more recent Ticket To Ride games have been released with larger sized cards.

The Ticket to Ride cards get a lot better with the game’s 1910 expansion game thereby making it much easier to shuffle and play with them.

The original cards were later replaced with regular-sized card sets in some additional expansions or other games however, the original Ticket To Ride still has small cards included in the set.

These small cards aren’t the end of the world as they can certainly still be shuffled and used but many people find that they are really difficult to shuffle properly.

I will go into more detail on some ways that you can get a better shuffle with these smaller cards a little bit later in this article.

If you want to see all of the different Ticket To Ride games that are currently available you can click here.

Players who want to mix up the Ticket to Ride cards but have issues because of their odd sizes, found an easier way to do so — that is by adjusting how they discard the played cards.

Some people will create 3 or 4 discard piles and spread the completed sets out to these separate piles as they play the game instead of discarding all of the cards into one pile.

Every time you need to shuffle the cards, you will just gather all the discarded decks and shuffle them some more.

Using this method the colors are naturally going to be more mixed up than if you have a lot of the same color cards stacked together in a pile.

Many players admit that shuffling the Ticket to Ride cards would have been less complicated if they came in larger sizes and more closely resembled traditional playing cards.

The smaller cards require more patience from the players as they can be a handful while trying to mix the cards and can easily get turned sideways or not get mixed enough.

Some players are getting more creative and resourceful as they play and they’ve learned how to handles their cards so that shuffling becomes a lot easier.

Another tactic in shuffling cards is by having someone mix the already discarded cards when it is not that players turn. That allows the cards to be mixed a lot more since they are shuffled virtually every turn.

How Many Train Cards Do You Start With in Ticket To Ride?

Ticket to Ride has been a popular board game since its release in 2004. The gameplay allows players to claim routes between different cities and place their trains on them.

Longer routes get more points and the players with the highest points at the end of the game wins. Connecting longer routes gives more chances for players to get higher scores.

To claim routes, players have to collect several train cards to match the colors on the board. This fun and thrilling game triggers positive competition.

Each player to start, needs to be dealt a hand of 4 cards to officially start the Ticket to Ride board game.

They will have to put the remaining Train Car cards closer to the board and flip the top 5 cards face-up. Then on the player’s turn they can draw more train cards, play the ones that they have, or choose additional destination cards.

Ticket to Ride comes with 110 train car cards comprising of 14 Locomotives, Caboose cars, Coal, Hopper, Fright, Reefer, and Tanker (all of them being different colors).

The train car cards are in colors of red, black, yellow, green, white, orange, blue, and purple to match various routes on the game board. Locomotive cards are multi-colored as they act as wild cards applicable for any set.

The player should keep at least one card and then return the rest to the bottom of the deck.

Can You Discard Train Cards in Ticket To Ride?

Train cards are the ones that allow you to place your trains around the board. There would be no reason that you would need to discard them as you might want to use them in the future on another route.

When you want to place your train on the board you will play the train cards from your hand but technically it isn’t discarding them as you are actually playing the cards to claim a route.

Even if you draw some cards that you don’t want, it isn’t the end of the world as you can use them on the grey routes once you finish your destination cards.

You also might want to block your opponents routes and these “unwanted” cards could come in handy for that as well.

When choosing destination cards throughout the game you will get the top 3, choose which one to keep, and then will put the other two back on the bottom of the destination deck. However, this really isn’t discarding them either since those cards can be drawn by someone else again later in the game.

Larger Cards in the Ticket to Ride Expansion Pack

The USA 1910 Ticket to Ride Expansion Pack is a continuation of the game’s original version.

The producers of the game heard the woes of the Ticket to Ride players and decided to release a new version, which is packed with 181 LARGE format cards.

It also includes a complete replacement deck for all the cards, a new GlobeTrotter bonus card for completing the tickets, and 35 new Destination Tickets!

This new version even has a fresh rulebook that will give players three brand new techniques to try and win the game. It also comes with the new 1910 rules, the Mega Game, and other tickets that are only for specific cities.

These card and rule variants introduce tactics and strategies into playing the Ticket to Ride game and the newer version can even bring delight to veteran players.

The makers of the Ticket to Ride Expansion Pack clarifies that this version is just an extension of the original version and not a totally stand-alone game however.

The original copy is still needed to play the expansion so make sure that you have that before buying this game expansion pack.

Other Best Ticket to Ride Board Game Versions

There are many different Ticket To Ride versions that are available. Some of the most popular ones are:

Packed in an oversized game box, the 10th Anniversary Edition features an adventurous cover design. Its board map measures 50% larger than the original version of the board game which makes it more fun to play.

This version is closely similar to the original version, yet the vibrant and well-illustrated designs and graphics make the gaming experience a lot more exciting.

Featuring the cities of Europe, the players are set for a trip across the country. Ticket to Ride Europe establishes new gameplay elements such as train stations, ferries, and tunnels.

Players who have been patient with small cards will get an upgraded version as this board game comes with larger cards, lavishly illustrated game boards, and train station game pieces.

The original version of Ticket to Ride certainly has cards that may be too small for many players. But aside from this issue with shuffling them, the game has a lot of other things to offer and is still loads of fun.

Ticket to Ride board games have various versions if players prefer to explore larger card sizes or play the different variations that are available.