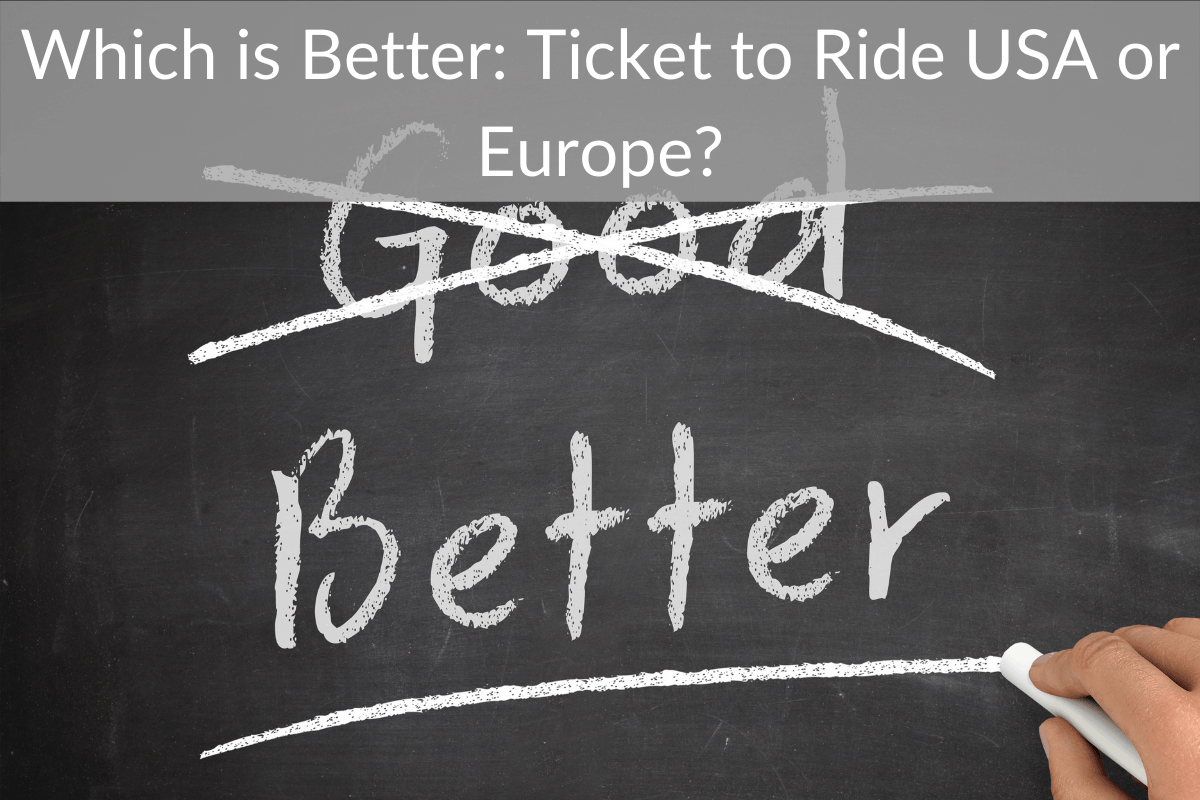 Ticket to Ride board games have grown in popularity over the years but especially as of late. In the first decade since its release, the game was very warmly welcomed among consumers.

For a newbie in the board game industry, it sure made waves with 30 million copies sold and over $150 million in sales.

Because of this fame, the company behind the game is continuing to come up with more and more ways to expand Ticket to Ride.

One strategy is digitizing it and making the game available on devices and consoles like Xbox. Another strategy is furthering innovation by creating more spinoffs, expansions, and additional versions that are similar in gameplay but still different from the original.

Aside from the original Ticket to Ride, which featured a USA and southern Canadian map, there are now various other variations, the most popular one being Ticket to Ride Europe.

One issue that many people have is whether they should purchase the original Ticket To Ride or if they should get the European one.

For someone who has never played Ticket To Ride before it is better to start with the original game. The rules are slightly less confusing and more people are familiar with the geography of that game as well (assuming you’re in the USA).

There is of course nothing wrong with buying BOTH games but starting with the original USA version is better in the majority of cases.

Of course if you live in Europe then buying that board game first might make more sense for you.

Which of the games is better among the two best-selling Ticket to Ride Games depends a lot on the personal preference of the players. But many people prefer the original version, which is Ticket to Ride USA.

To see the most popular Ticket To Ride variations currently on the market you can click here.

Which Ticket to Ride Version is Better?

It’s hard to name one Ticket to Ride version as a better option over the other, considering that there are key differences that distinguish the many different variations.

Most users, however, will always say that the original version, Ticket to Ride USA, is better than most of the other spinoffs, extensions, and variations.

However, it really depends on your preferences when it comes to board games.

Ticket to Ride USA may be more suitable for you if you:

The expansion efforts of Ticket to Ride manufacturers started with creating more maps.

By making a Ticket to Ride version of a particular country, they’re reaching and appealing to more players from around the globe.

Many players think that the different Ticket to Ride games targeting specific countries only differ in terms of the map used and that there is really no significant difference in the gameplay.

But that’s not true. In fact, there are both minor and major differences between the different variations of the game.. Let’s take a look at how Ticket to Ride USA and Ticket to Ride Europe differ.

The USA version features a map of North America and Canada. The players travel across this area and navigate the cities, routes, and stations in the USA.

On the other hand, Ticket to Ride Europe features the European map. Some players from the United States who have tried this version found it difficult to navigate, especially being unaware of European destinations which made finding them on the board a bit tricker.

The USA version had all the cards in one deck, without special distinctions. However, the European version of Ticket to Ride added a twist.

In the latter version, there are 6 distinct long destination cards, which are dealt to each of the players at the beginning of the game. The rest cannot be drawn with regular cards while playing.

This gives all the players an equal advantage at the start of the game, with a long route immediately in their roster.

Ticket to Ride Europe also has a new in-game feature that now allows players to build their train stations.

This was not a possibility in the USA version of Ticket to Ride, with the only actions you can do originally were:

In the European version of the game, players have an additional option to build a train station, in addition to the three stations that they are given when the game starts.

The benefit of this option is that the player who builds a train station can use one route that belongs to another player and connect their cities or destinations.

Train stations can only be built in unoccupied cities that have no routes. Further, only one train station is allowed per city.

Compared to the regular routes in the USA version of the game, the Europe version of Ticket to Ride features two different routes:

In the USA Ticket to Ride version, one route is only a max of six trains long. In the European version the longest route has eight trains between cities.

This longer route of course gives the player more points. It’s worth a total of 21 points to be exact.

Ticket to Ride definitely boosted their game with new versions, new destinations, and new features that players can enjoy.

The original one, Ticket to Ride USA, is the most common preference. But other maps also don’t disappoint — as evidenced by the rise in popularity of Ticket to Ride Europe.

With there being so many new features and differences between the USA and European versions, it’s difficult to say which one is better but if you are just getting into this game, the USA version is definitely simpler.

Ultimately, it just depends on the preferences of the players and what they look for in a board game.