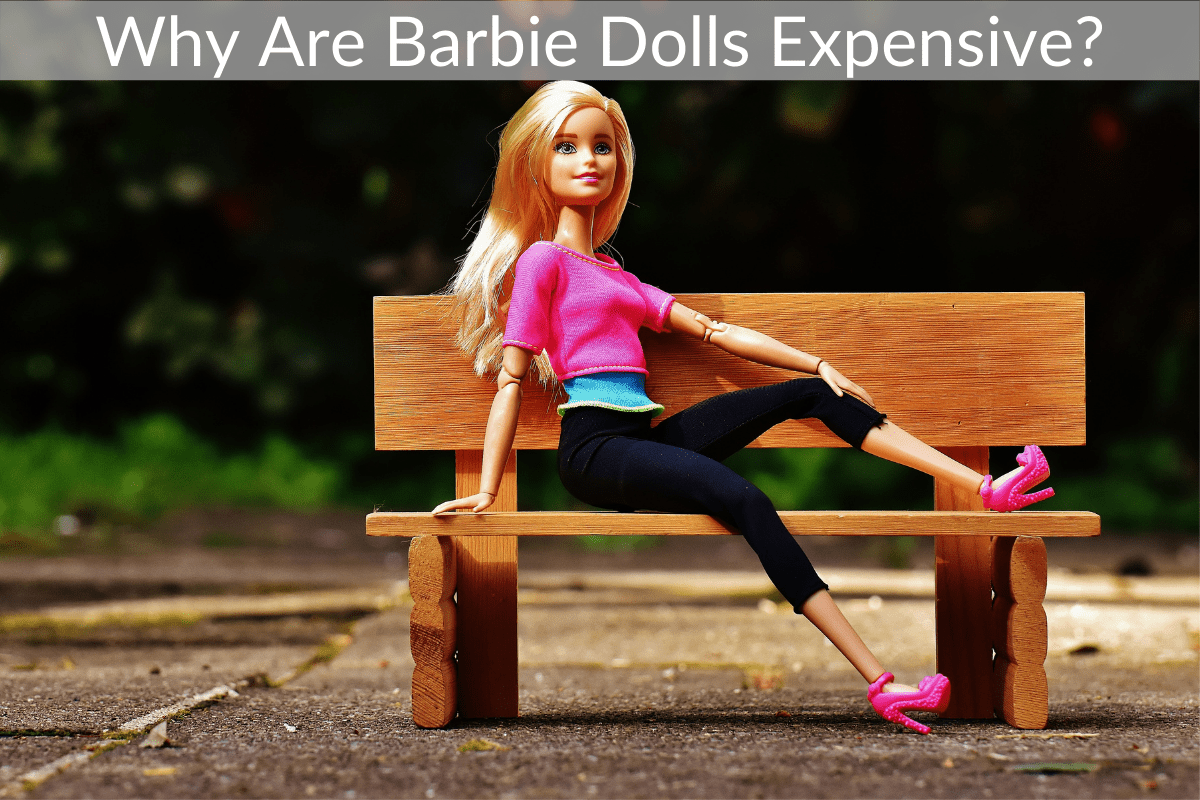 Current production Barbie’s are not necessarily the most expensive versions that are available at local retailers. The collectible memorabilia Barbie’s are in a completely different price range and typically can’t be found at your local stores.

A regular standard Barbie will typically cost between 7.00-15.00 dollars depending on what accessories are included with it or if it’s a special edition.

Each series of Barbie’s has some added accessories and clothing that is typically sold separately.

Every year Mattel releases a Holiday Edition Barbie, and this is where the price increases. The cost of the current 2020 Holiday Barbie is anywhere between $40.00 and 60.00 depending on the hair color.

But why are all Barbies so much more expensive than other similar generic dolls?

Barbies are more expensive than their generic counterpart mainly because of brand recognition and quality of the dolls. You have to pay more for a name brand (Barbie) just like you would any name brand product.

The quality of a Barbie doll is also why they are so much more expensive than other dolls that seem to be virtually identical. Although they might look the same or similar in reality the quality of the doll is quite a bit different.

As someone who has had two girls playing with dolls, I can tell you that there is a significant difference in how long a Barbie lasts vs how long a cheaper doll does.

In many cases it’s actually CHEAPER to buy the more expensive Barbie dolls than it is to buy cheap dolls over and over again.

Some of these limited-edition Barbies can cost anywhere from 1000.00 and up which is a far cry from the much cheaper prices that normal Barbies sell for.

To see some of the most popular Barbies currently on the market and how much they cost, just click here.

What Makes A Barbie A Special Edition?

Special edition Barbies will be released at various times of the year, especially around holidays. However, Mattel only makes a specified amount and when they are gone, they are gone.

Holiday Barbies are one special edition but they are far from being the only one.

There was a series of Barbie dolls that came out in the mid-90s called “Dolls of the World”. These Barbie dolls were symbols of different countries such as Scotland and England and their clothing and accessories were for that specific country.

A collection of Barbies also from the mid-90’s called “Winter Fantasy” were iconic because of the particular dress that they were wearing. The dress was produced in three colors White, Gold and Burgundy.

Another collection of Barbies that was produced was the “Inspiring Women” Collection. They are Barbie’s that are replicas of famous women throughout history. Some of the women featured are Susan B. Anthony, Ella Fitzgerald and Florence Nightingale.

What Barbies Are The Most Expensive?

The highest priced Barbie of all time to date is a Barbie that was commissioned to the jewelry designer Stefano Canturi.

The Barbie was designed for charity to raise money for the Breast Cancer Research Foundation.

An original 1959 Barbie that was kept in mint condition also sold at auction for over $27,000. The original Barbie sold in retail stores for $3.00 which would be equivalent to over $26.00 today so that’s certainly a substantial increase!

Lorraine Schwartz is another famous jeweler that attempted to create a limited-edition Barbie but with a different projected outcome. The Barbie was titled “Bling Barbie” and the Barbie contained $25,000 in diamonds. However, the doll only sold for $7,500 at auction!

There was one Barbie that had a high retail price when sold in stores and that was “Pink Splendor Barbie”. Upon release this doll was selling for $900 and can now be purchased for a third of the original price!

There were actually many Barbies that had a larger price tag in the stores when they were originally sold then they are currently worth.

What Barbie’s Are the Rarest?

Skipper was one of the rare Barbies that collectors will pay a high dollar to have. “Growing up Skipper” is specifically one that is in high demand but hard to find.

“Growing up Skipper” was also controversial in the 80’s and was rated one of the worst toys ever. In this edition Skipper would grow from a child to a teen by rotating her arm.

Another exceedingly rare Barbie is the “Pink Jubilee Barbie”. Only an extremely limited stock of these were made as they were intended for a gift for an invitation only party.

“Pink Jubilee Barbie” was also the 30th Anniversary doll. This doll was produced in 1989 and given out in New York City at the Lincoln Center.

Mattel also made a Barbie that came with a small bottle of perfume. This perfume was said to be safe for the Barbie and the child playing with it. The dress was also customizable from the length to the sleeves.

Mattel’s Barbie is no stranger to controversies and that started rather quickly after the introduction of Barbie. Many people felt that the shape and figure of Barbie was unrealistic and made young girls feel insecure about their bodies.

The original Barbie was attacked first since it was modeled after a gag gift that was given to men.

“Teen Talk Barbie” was a talking Barbie that said a few phrases that many people felt were just plain sexist. Many people did not like the phrase “Math class is tough” especially.

Mattel did not stop making this Barbie but was willing to do an exchange for those people upset by it.

Mattel did not avoid racial controversial Barbies either. Two specific Barbies were produced that seemed to scream insensitivity:  “Oreo Barbie” was available in two races and then a “Blonde Weave Barbie” was released as well.

These did not go over well.

Most recently Mattel created a Barbie that was classified as “Plus-size Barbie”. Rationally thinking this has a good concept to the argument of the 60 years of underweight Barbie.

However, Mattel did not just introduce plus-size Barbie but instead made her huge with an added double or triple chin.

One thing about controversial Barbies is that the value typically increases with age since many less people have them.

Mattel’s Barbie is a branded product with many marketing strategies that has built an empire off of one doll produced by an everyday person. However not all of their strategies have been well thought out.

The value of these Barbie dolls typically increases with condition and rarity and many of them are designed to not just be a toy.

Other corporations and top name designers have become involved and helped to skyrocketed the prices of some Barbie products.

Coca-Cola, Oreo and I Love Lucy have created or been involved in the creation of certain dolls as well.

There are many qualities these dolls have boosted the image of Barbies such as “Dolls of the World”. These series of dolls have opened the door to other ethnic backgrounds that possibly would never have been opened otherwise.

Some famous successful women have been portrayed to show children that can be anyone they want to be and be a successful strong woman.