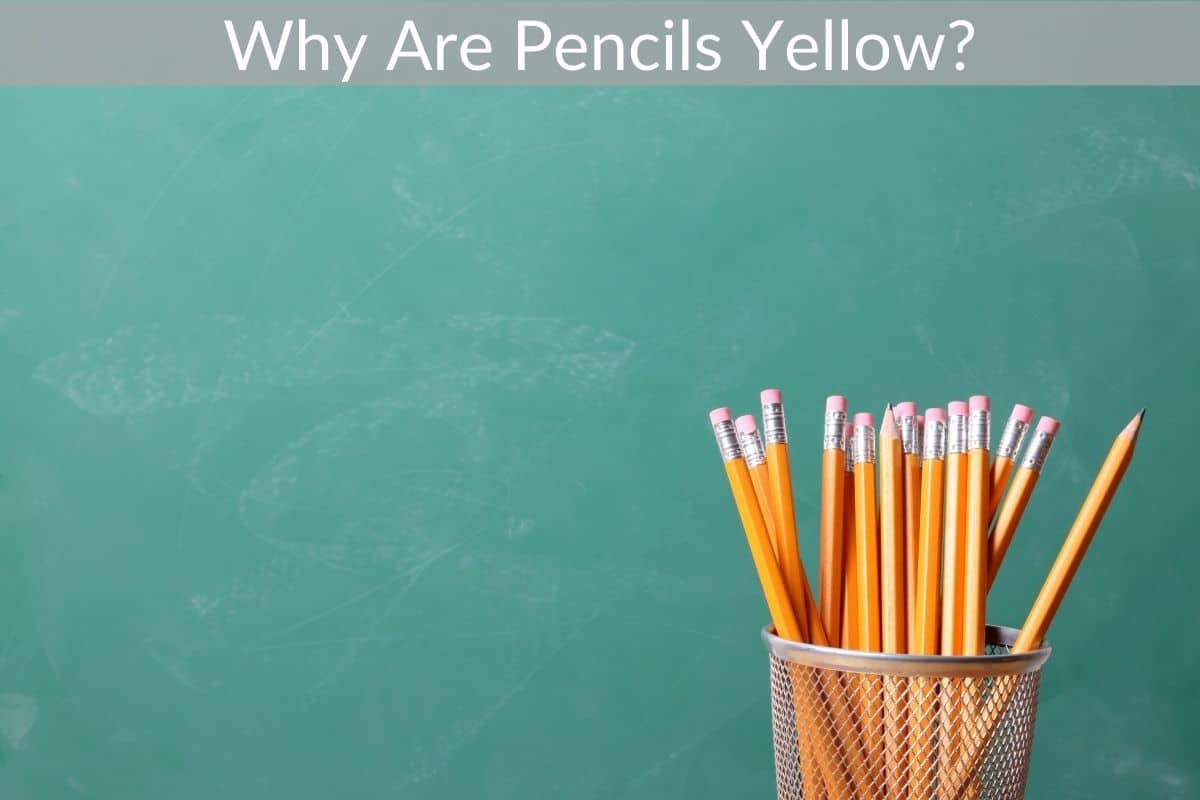 Imagine a classroom complete with school books and a chalkboard. In your mind you probably see an apple, desks, and paper. You imagine sentences or numbers drawn on the board in white chalk and students holding pencils leaning over their test paper in front of them.

Such an image wouldn’t be complete without a classic number two yellow pencil.

Yellow #2 pencils have been a part of every schoolroom for over a century. You may think that this sketching tool is so brightly colored to make it easy to find on a desk full of books and school supplies.

But the real history behind the yellow pencil is actually quite unique.

Pencils are iconically yellow to represent the best graphite used from China. In China yellow represents loyalty and respect.

The idea of the best quality pencils became a hit. Making the pencils yellow became a way that American pencil companies told their consumers that their pencils contained Chinese graphite and were quality writing utensils.

The first yellow pencils were quite expensive but now we can purchase a package for a few dollars.What started out as being a representation of the high quality in which pencils were made is now common.

Eventually American pencil companies everywhere liked the yellow idea and copied the look for their own products.

Today yellow pencils are a normal purchase on the school supply list. Pencil companies still make the classic Number 2 pencil and over a hundred years after its invention it remains a favorite tool used to write with in schools and at home alike.

To see the most popular pencils available (yellow or not) just click here.

Why Are Pencils Hexagonal?

The six sided pencil is the most popular and common. At one time or another you have likely held a yellow #2 pencil in your hand and felt the hexagonal shape.

There is actually a good reason behind why they made the pencil in this shape instead of round.

Pencils are hexagonal in shape to make them easy to grip and so they won’t roll off a desk a table as easily.

Pencils used to be made by hand and when they began to be machine made, manufacturers realized that they could produce more pencils out of a wood slat by cutting them in a hexagonal shape. This way they would produce an extra pencil and more in the long run.

While some artist pencils are round, most regular pencils have been made using the same hexagonal shape for over a hundred years.

Making the pencils with six sides created a more comfortable grip when writing. Since they would be used by children everywhere beginning to write, it made sense to make something that would be easy to use.

The many sides to the pencil also helped them not to continually be rolling off of a desk. When placed down on the surfaces it stayed put so that it could easily be picked back up again for more writing.

What Does The #2 Mean On A Pencil?

The first thing that comes to mind when thinking of a #2 pencil is probably the color yellow. The next thing would probably have something to do with school.

Even though the yellow writing tool can be used outside of the classroom, the two somehow always seem to just go together. But have you ever wondered why that number is put on the side of the writing tool?

Pencils featuring a #2 of them represent the hardness of the graphite inside. The higher the number the harder the core making lighter marks on paper.

The marks left by it are just bright and perfect for any type of writing. Its lead doesn’t break easily yet it is light enough for crisp lines to be drawn.

If the graphite core of a No. 2 pencil is too hard, the marks made by it would be too light. It’s marks are opaque enough to where you can clearly see what you have written without it breaking by being too soft.

Number two pencils are the preferred choice of pencil by teachers.

What Is The Best Pencil?

Germany holds the title of being the birthplace of the pencil although with its yellow color illustrating its wealth, it comes as no surprise that the country that produces the most pencils is indeed China.

Out of the billions of pencils manufactured every year, what are the best ones to use?

Number two pencils are considered the best pencils to use if you want durable and high quality marks on your paper.

Some of the best pencils for writing offer comfort and smooth marks. One pencil company, Palomino ForestChoice, makes a high- quality pencil that is comfortable to hold and delivers good marks.

It is a smooth-writing pencil and if mistakes are made its erasers cleanly removes the marks. All of the Palomino brand pencils are good choices for optimum writing performance.

If you are on a tight budget and still want a good pencil, Dixon Ticonderoga pencils are the option for you. Not only is it cheap, it has a decent eraser and writes great.

Comfort and smooth writing and sharpening accompany this pencil for long uses.

Back to another Palomino brand pencil, we have the Blackwing 602. This pencil is great for schoolwork.

It features a soft exterior, replaceable eraser, and a smooth dark core, however it is an expensive option for a pencil.

Pencils are used worldwide by students, teachers, and artists. The yellow color of pencils is interesting in its fact that it did not come from America. Yet, America quickly adapted the idea and have been creating yellow pencils for over a century.

Along with being an iconic school supply, yellow #2 pencils represent that something small and insignificant can offer high quality with a big purpose.