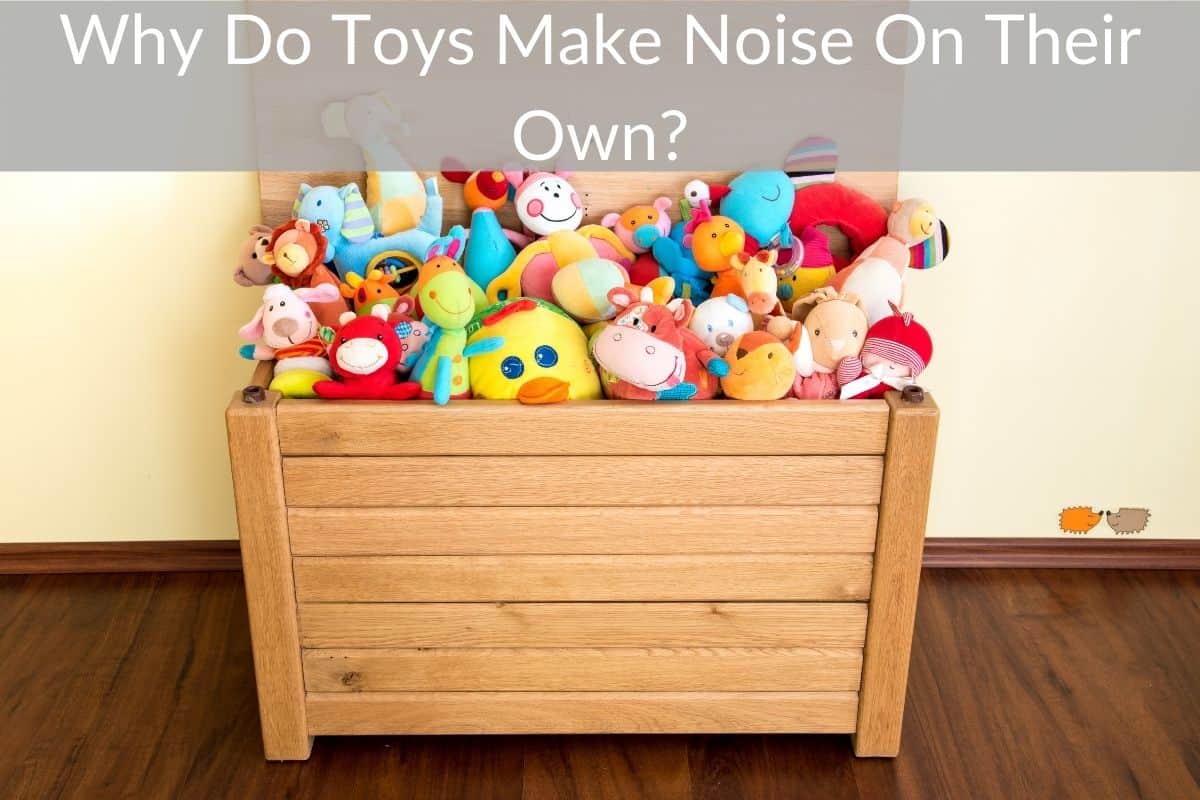 If you happen to have a toddler or children at home, the chances are that your house may soon start resembling a toy shop replica. It’s unclear as to why children find toys so fascinating, but it’s surely a great way for them to make use of their senses from a young age.

Given how there’s so much variety in the market these days, it’s hard to figure out how each and every toy works. However, nothing beats the scares you get when the same toys start turning on or off at random hours during the night.

So, why do toys make noise on their own after all?

The most likely reasons why toys make noise on their own is because the buttons are either partially stuck in or other toys are pressing against them. From faulty batteries to system settings within the toys, there are several different reasons behind them making noise on their own every night.

Of course nothing quite beats being woken up in the middle of the night by a toy talking but if you understand why it happens it might help calm your heart that is about to beat out of your chest!

Let’s look into some of the things that can cause toys to randomly turn on. To see the most popular toys on the market just click here.

Why Do Toys Make Noise On Their Own?

Gone are the days when toys used to be simple and easy to play with. Today, you have battery-operated, non-battery operated, and several other types of toys that are available. Thanks to technology, it’s hard to even get ahold of many toys that don’t have the mobility of their own, or in other words, aren’t electric.

There are various reasons behind toys making random noises throughout the day (or night). Here are some of them.

They May Have a Sensor

Some electric toys are designed to chirp a small sound or melody in case they haven’t been played with for a long time. It’s a way to remind your child to play with them again.

However, the sounds never last for long as the toy may eventually turn itself off to save battery after constant reminders and no activity. Toy manufacturers often incorporate this feature to avoid paying for a physical switch that is time-consuming and labor-intensive to install.

They May Have A Low Battery

Some toys tend to make a sound when the battery gets low. It’s also possible for them to make noise at a very random hour at night.

Even though it may seem creepy for a while, it’s just an exhausted toy battery that may have been left on throughout the day.

They May Have an Active Motion Sensor

It’s hard to determine what causes a toy to move or make sounds etc., since we’re unfamiliar with their internal wiring. However, many toys these days come with a motion sensor.

This means anything that’s even remotely moving can cause it to produce some form of noise. Some of the most common triggers include floating dust or shadows and lights.

They May Be Under a Pile of Weight

Toys piled up in a single box or space can put weight on each other, causing the sensors to detect movement now and then. This means that toys can make sounds while shifting or sliding since there’s limited space.

Their Sensors Could Be Finicky Due to Moisture

With imaginations and curiosity unmatched, there’s no telling where children will take their toys to play. I, for one, would not mind taking my toys along in the bathtub or even while having food as a child.

It’s possible for toys to get damaged in the process, and it’s also possible for them to have faulty functioning due to moisture.

Is Excessive Noise Harmful to Your Child’s Hearing?

How many times have you considered the noise levels of a toy before purchasing it? Probably never. That’s usually because we don’t like to pay much attention to their specifications when buying them.

If your child likes it, you’ll get it for them, and that’s the end of it. However, excessively noisy electric toys are not only hazardous to your child’s hearing but also their mental health as they grow up.

What Has the Toy Industry Association Done In This Regard?

Interestingly, the issue is not new and has already been raised almost two decades ago. After bowing to pressure from organizations like the Sight and Hearing Association and the American Speech-Language-Hearing Association, the Toy Industry Association modified the sound limit for toys and set it to no more than 90 decibels.

Unfortunately, even though the guidelines are already there, manufacturers aren’t obligated to follow them. Additionally, they’re also not required to mention the sound levels of a toy on the packaging.

Therefore, whether it’s a toy ambulance siren or a sing-along book, there’s always a chance that their sound may be exceeding safe limits when they hold them close to theirs or another child’s ear.

What Can You Do About Noisy Toys?

Now that we’ve moved past the subject of “why do toys make noise on their own?” it’s time to understand what we, as parents, can do to protect children from the impact of that noise.

Unless you want your toddler abruptly waking up at night to the sound of an annoying toy, here are some things you can do to ensure otherwise.

Listen to the sound of a toy yourself before handing it over to a child. Make sure to experiment holding it at least 12 inches from your head to see if you flinch at the sound.

Toys often come with a volume control switch so you can set it to a suitable limit. However, in case there’s nothing to manage the sound levels, you can simply put packing tape over the speakers to reduce the intensity as much as possible.

In the case of battery-operated toys, just pull the batteries out.

It’s a lot more common to be freaked out by toys producing random noises at night than we would like to believe. For the most part, it’s all thanks to the horror movies you watched growing up. However, no matter what junk the media infiltrates into our heads, there’s always an explanation for these noises.

So sit back and relax. A spirit doesn’t possess your child’s toy. All it needs is some recharging or your child’s attention or a spot away from any movement that the sensors may eventually catch.