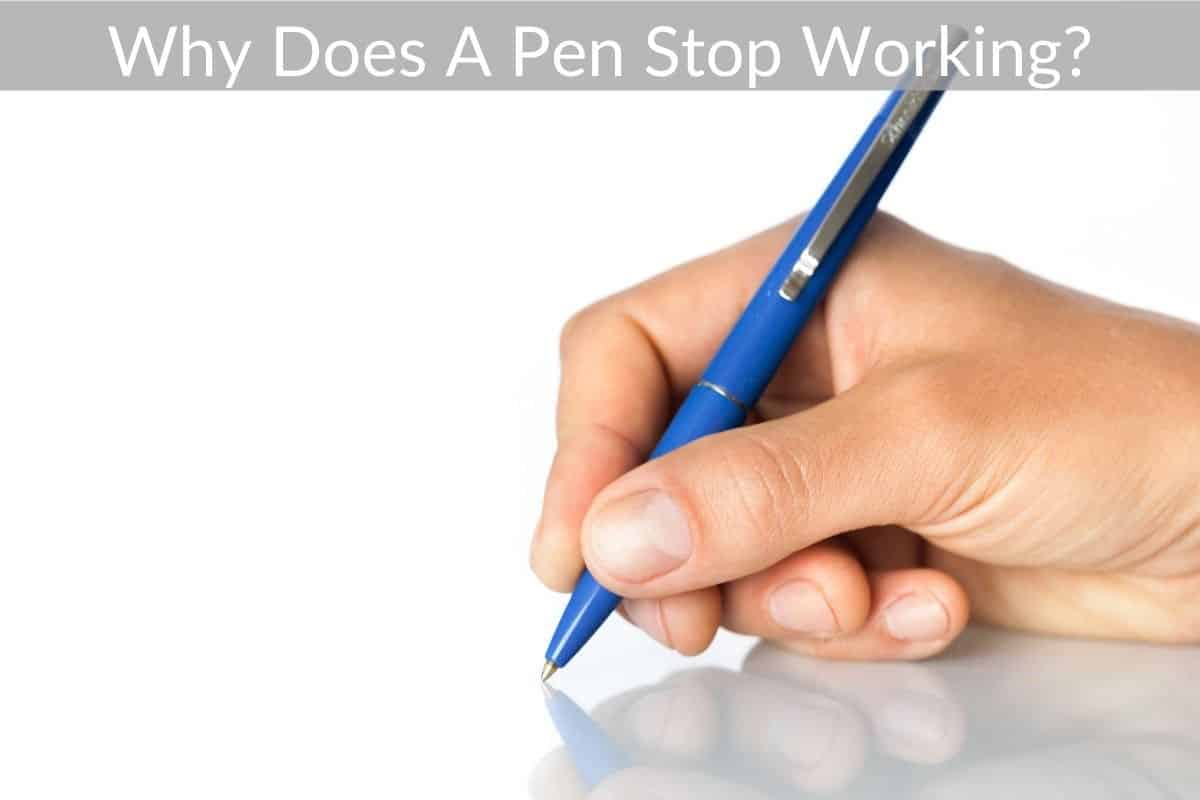 There’s a lot you can do with a pen and it has even been said that it is mightier than the sword. With a. Pen you can do virtually anything.

Thoughts can be displayed across paper.

Words can be written down on pages in the form of a story or poem.

You can create drawings with a pen by creating lines and shapes resembling something in particular.

Whether at the office or at home, if you use pens constantly you know it when you have found one that works for you. It will write smoothly and won’t run out of ink as fast so you can keep up your note-taking and writings for long periods of time.

But what about when your favorite pen stops writing? Why do pens stop working?

A pen stops working when it runs out of ink or when the ink has dried out. For most people the ink will dry out in the pen before the ink actually runs out.

Whether the ink has run out or dried out the result is still the same… you have to replace the ink cartridge inside the pen.

Along with running out of ink or it drying up, another of the reasons behind why a pen may have stopped working could be that too much air has entered the ink cartridge.

Yes, there is actually a reason why your teachers told you to put the caps back on your pens at school. Sometimes when the cap is left off a lot of air gets inside the pen.

Ballpoint and rollerball pens are designed to keep the air out and their ball in the nib of the pen acts as a cap to stop the air from getting through. But there are times when the air does get inside the pen.

When this happens, the ink cannot flow as freely as it needs to inorder to be written with. Most people think that the pen just dried up when actually it may just be clogged. There are ways this can be fixed that I will discuss later on in this article.

There are numerous reasons why a pen stops working. Anything from something getting inside its ink cartridge to something breaking on the pen could cause this to happen. If the ink of a pen cannot flow freely, it will stop supplying the ink needed in order to write.

To see the most popular pens just click here.

What To Do If A Pen Stops Working?

Now you know your pen did not run out of ink because you just bought it a couple days ago. You haven’t written with it very much and there’s no way you used up that much ink already.

What do you do if this sort of thing happens and your pen stops working?

To fix a pen that has stopped working, you can use heat, solvents, or simply move the pen to get the ink flowing again.

Fixing a pen that stopped working might be easier than you think. Just try a few things to get the pen work again.

First you can try to use heat. Put the pen in boiling-hot water for about 5 minutes. Test it out on paper to see if this has fixed the problem. If so, dry off the pen and write away.

If not, try either warming the pen with a blow dryer or putting it over a flame for a few seconds.

Solvent such as spit, rubbing alcohol, or acetone may help the pen to start working again. You can rub these on the pen or place the tip of the pen in them and try out the pen to see if it has worked.

Sometimes ink may just be stuck on the tip of the pen. If this is the case try scribbling it on a rubber surface. You can also try shaking the pen to loosen up the ink. If the ink is in a wide cartridge, push it down with a cotton swab.

How Long Do Unused Pens Last?

You use pens quite a lot. At your house and at your office you make sure to always keep some good pens handy. If you don’t use a pen, how long will it last?

An unused pen will last for up to a decade. It wont dry out since the cap hasn’t been removed yet.

Stocking up on pens may be a must for you. You may have children in school or you use pens yourself all the time. Having pens on hand is important to you because they are used a lot around your home or office.

It’s been said that a pen which had been stored for about six months worked right away. Right out of the box it started to write. While ink eventually can go bad it is really rare that it does. Pens can last for years and years when they are unused and unopened.

As far as an opened pen goes, the life span all depends on how often it is being used. Another thing that can factor into how long the pen lasts is if it is properly stored with the cap in place when it is put away.

Why Do Pens Stop Working On Certain Paper?

Pens can dry out. They can get air trapped in them and completely stop working. Sometimes they need a little pick-me-up to get the ink flowing again.

But why do pens stop working on certain paper?

If the pen stops working on a certain type of paper, it could be that there are oils or other things on the pages and the ink cannot get to the actual page since these things are in the way.

Something came to your mind you just had to write down. You picked up your favorite pen and started to jot it all down. Thoughts flood your mind while your pen scribbles them down on paper in the most creative way.

Suddenly, the pen skipped a letter. You go back to write it again and the ink just won’t write. You try the pen out on another piece of paper and it works just fine.

It’s only that one spot where the pen just will not write. Why is this happening?

When your pen stops writing on just one spot on paper, it could be from the sweat and oil your hands have produced and put on the page.

When we write, most of us drag our hand along the paper. When the pen reaches a point where a lot of oil has gotten on the paper from our sweaty hands, it won’t write.

Other factors could include heat, humidity, or influence of the atmosphere but most of the time the reason why the pen stops working just on a specific spot is because of oil on the page.

Pens can stop working for any number of reasons. One being that air might be trapped inside or maybe it has just dried up. If you want to try to get a pen working again try putting it in warm water. If this doesn’t work you can try some of the tips I mentioned above.

Pens normally last for a while depending on how often they are used and if they are stored properly. Unused pens will usually last until you want to use them even many years later.

If your pen stops working on certain paper, it is probably caused by the sweat and oil your hand has put all over the page. So when you reach that spot the ink cannot reach the paper since the oil is blocking it.

As you can see, there are so many things that can cause a pen not to write. You can try to buy a whole package of your favorite kind of pens so you don’t run out when you need to write something down.

link to Which LOL Dolls Change in Water?

Continue Reading
link to Are Basic Pokemon Cards Worth Anything?

The popularity of Pokemon has increased over the last few years with the mobile game of Pokemon Go and videos of social media influencers finding valuable cards making the trading cards really...