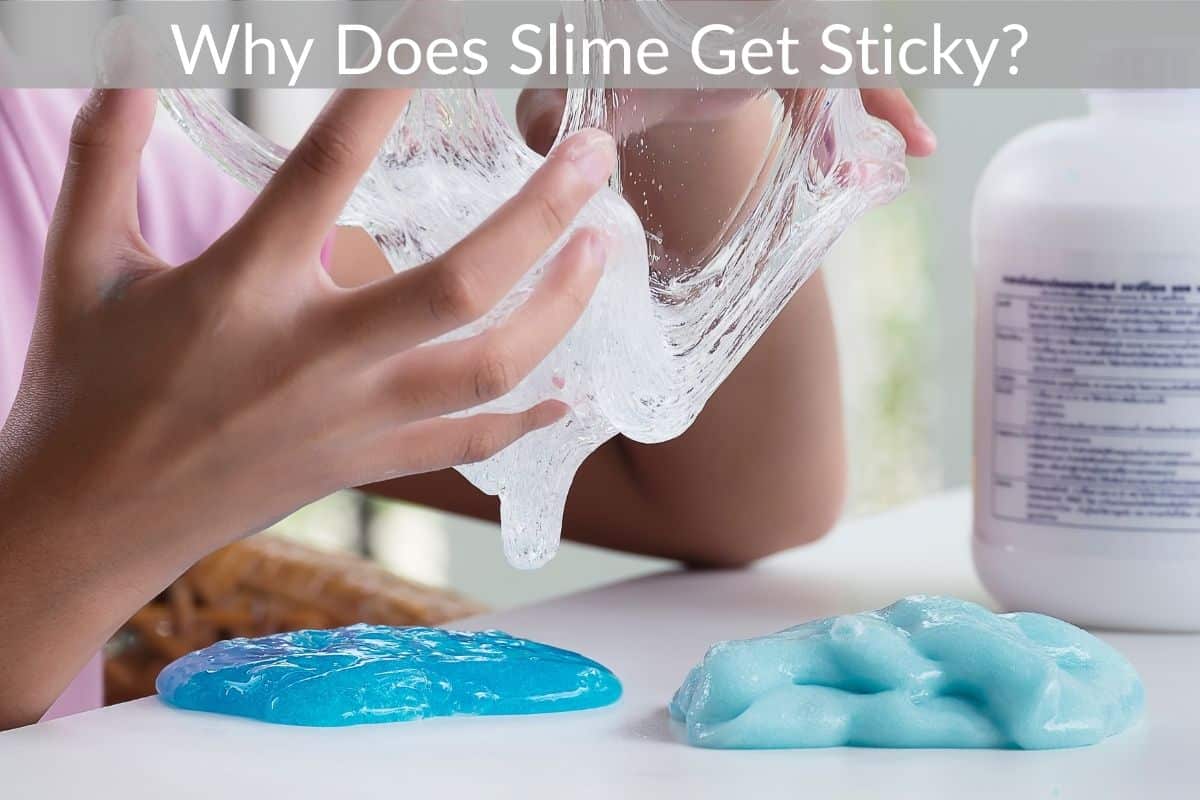 Slime can be lots of fun to play with. This gooey Non-Newtonian fluid is so unique to hold. When dropped from hand to hand it runs like a liquid but when squished it feels like a solid. It comes in different variations, colors, and textures.

Your kids will love to sit and play with slime but when it starts to get really sticky the good time seems to come to a halt.

Your child holds up the glittery pink slime in the air and voices that it is too sticky. While you look on knowing you must do something about the substance sticking to their fingers before it gets anywhere else.

Slime gets sticky if it doesn’t have enough of the right ingredients and may even get sticky over time as it starts to dry out.

So saying that slime is a Non-Newtonian fluid means that it is neither a liquid or a solid. Its particles can change consistency depending upon how much pressure is applied to it. Its pretty cool when you think about it.

Play-doh and Silly Putty are some other examples of toys that are fascinating Non-Newtonian substances.

If you make slime correctly with the right ingredients it will turn out just right but not adding enough of a certain thing can result in it becoming sticky.

Adding too much activator may make the slime too runny so make sure you add a little at a time to get the right consistency. Also not kneading it enough can make the slime sticky. So knead ,knead, knead until the consistency is what it should be.

Rather than making slime yourself you can buy some as well. The most popular slimes can be found here.

How Do You Fix Sticky Slime?

If your slime has become too sticky and not slimy enough you may need an activator to bring it back to life. A slime activator will be that extra ingredient needed to give it enough oomph to be slimy again.

There is a product made specifically for this problem. It is called a slime activator and it works wonders.

An activator is something that binds the glue and the other ingredients together in the slime to form it. Like I mentioned earlier, too much activator and then slime will be runny and too little and it will be sticky so add in just the right amount a little at a time.

In no time you will have squishy, and ooey gooey slime!

How Do You Fix Sticky Slime Without Activator?

Most slime purchased at a store or slime activators will contain borax since it is an ingredient that helps with the stickiness but it is known to be harmful. So if you want to opt for something safer there are some options.

And they are probably already common in your household.

To make your slime less sticky without using an activator there are other ingredients you can add to it such as contact saline solution, baking soda or even shaving cream.

By adding some eye contact saline solution mixed with baking soda into the slime it will get more slimy rather than sticky. Just do a couple drops at first and knead them thoroughly and add more as needed.

Liquid starch can also be used and you can start out by adding a couple teaspoons and see if that does the trick. If it needs more, keep adding a little at a time until it reaches desired consistency.

Another thing you may try for the sticky stuff is add in some liquid detergent or you may even be able to put the slime in the freezer for a couple minutes but this doesn’t always work.

Whatever you do, most of this is found in your house already or is readily available at the store to purchase so you will have your slime back to normal and ready for play in no time.

How Do You Make Fluffy Slime?

As if slime isn’t fun enough, what if I told you there was fluffy slime? Yes, the best of both worlds, fluffy slime!

And it is simply spectacular.

Making slime is a fun and creative time for your kids. Fluffy slime is like a big glob of awesomeness and you can make it yourself!

To make fluffy slime you just need to get Elmers glue, contact solution, shaving cream, and food coloring. Then just combine these ingredients and you have fluffy slime!

Let me further explain this simple three ingredient recipe for fluffy slime. You’ll need a plastic bowl; and spoon and a place for playing with it after it is created.

You will need to get Elmer’s white school glue, two tablespoons of contact solution or liquid laundry detergent and one to two cups of shaving cream preferably unscented for no smell.

Food coloring is optional if you want the slime to be a specific color.

Combine the glue and food coloring until it’s the right color you want. Then add in the two tablespoons of saline solution and mix well until combined.

The shaving cream is next and you can add in a cup of this. The more shaving cream you add the thicker the slime will become, the less you add in the slimier it will be.

So you can add more as needed. Most people usually end up adding about a cup and a half.

Finally, you’re gonna stir the slime really well until you can no longer stir it anymore and then take it in your hands and knead it. It’s gonna be sticky at first but just keep kneading it together until it’s no longer sticky and it has become the desired consistency.

Now the fluffy slime can be played with on a placemat, cardboard, etc. You will love how fluffy it is!

When slime is too sticky as it naturally becomes, add some slime activator in to get it slimy again. It’s a quick and easy fix that can get your child back into the ooey gooey playtime they enjoy.

You can also enjoy making fluffy slime with them. This colorful glob of airy awesomeness that can be shaped into whatever you’d like. It is so much fun to squish and smash.