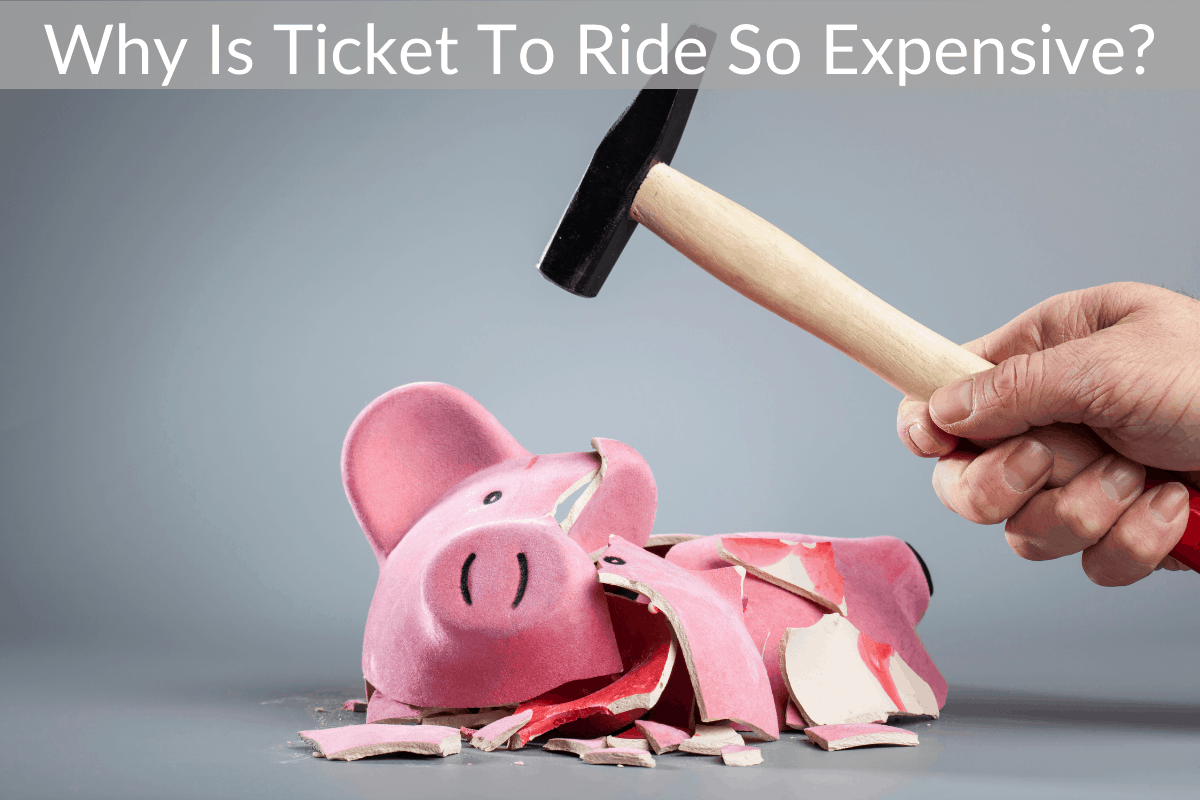 Board game enthusiasts have already made peace with the seemingly expensive price tags on the Ticket To Ride board game. The prices run from around $50 to over a whopping $100, but if you are someone new to the world of board games (which we assume you are) seeing the price of this particular game will certainly shock you.

After all, why would something as basic and simple as a game made of cardboard, paper, and a little plastic cost so much?

Ticket To Ride is expensive because it is considered a premium board game and thereby they charge a premium for it. They are also able to keep the prices high because it is a relatively new game which means there aren’t many used ones on the market to drive down demand for the expensive new games.

Ticket To Ride is also extremely popular so Days of Wonder (the maker of the game) has no reason to drop its prices.

A lot of newer popular board games are quite expensive but many people are used to only spending $10-$15 on a board game. This is because the older board games (Monopoly, Candy Land, etc.) have been around for so long that they aren’t able to charge extremely high prices for them unless they are special editions.

To see all of the different Ticket To Ride games that are on the market you can click here.

Why do board games in general cost so much?

Before we dive a little bit deeper into why the price of Ticket To Ride is so high we should first look into why many of the newer board games in general are so expensive. Let’s have a look at the various processes in board game creation that costs the most money:

Making board games comes at a very significant price especially when it is a brand new game. The artists, designers and the entire marketing team needs to be paid. Even small-scale game companies have to deal with a lot of expenses just to launch their product onto the market. The manufacturing also involves a lot of hidden costs as well because often making smaller amounts of games is far more expensive than making millions of identical games.

Why is Ticket To Ride so expensive?

Ticket To Ride retails at a price ranging between $50 – $70 or more depending on the variation and if it’s an expansion. Ticket To Ride is a unique and fun game which appeals to a worldwide audience which is partially why it is still so expensive.

A lot of creativity, time, and talent went into creating something as fun as the Ticket To Ride game and all of that costs a lot of money!

The production cost is actually quite a bit higher than you might think as before any game hits the market the company will have to pay an insane amount of money just to produce the game.

Most self-publishing board game companies have to bare a minimum expense of $3000 which is not cheap but that is the case for simple board games!

However, a more sophisticated and challenging board game like Ticket To Ride can cost over $20,000 to manufacture the first batch and sometimes the costs for bigger board games are even more expensive to produce.

Businesses need to have a return on their investment otherwise it won’t stay open for very long and even if a game sells for $50, it will take a significant amount of sales to even cover the original production costs.

There is never a guarantee on the number of sales either which is why board games are a risky business.

Also when you look at the bigger picture, the entire amount of money in sales doesn’t even come close to reaching the makers of the game. A good portion of the sales amount will go to the store that sells them and sometimes this can be up to 50% of the cost of an item!

This is the case with books, music, movies and other commodities and services. If they are lucky enough, the game designers might receive half of the sales money.

The game, especially the original version, is honestly decently priced when you compare it to other premium board games and take all of the above into account.

For example, the board game Catan with the 5-6 player expansion is currently $20 more to buy than Ticket To Ride is!

However there is no doubt that the cost of the games increases significantly when you start to turn it into a hobby.

Most players of the game will begin by purchasing the original version, however it often slowly snowballs to the next variation and the next and so on. Then one day you find yourself with the entire collection of Ticket To Ride games. Although purchasing one game likely won’t break the bank there are currently 24 different Ticket To Ride games on the market which means that to purchase all of them you would spend somewhere abund $1,000!!!

Why is Ticket To Ride worth buying?

Most people don’t mind paying extra for something that adds value to their lives or is a way to have tons of fun with family and friends and this game certainly offers that!

Here is why I feel that Ticket To Ride is worth the price.

You can have many hours of fun with a single purchase

Every board game is an investment and when you pay for Ticket To Ride, you own it forever. There are no additional costs involved – no greens fee, no maintenance costs and no monthly subscription. You can pick it up and play any time you want.

The game is built quite well also which means that unless you lose a bunch of the pieces or are careless with it you will be able to play it for many years to come as well.

Brings families and friends together

Ticket To Ride is a simple and easy game to play so it can be enjoyed by virtually everyone, from teens all the way up to seniors.

Games like this one help people unplug from the digital world and enjoy a face to face interaction with your family and friends which is actually something that many people lack in today’s society. Also, since it does not involve combat or challenges it creates a more peaceful environment.

It enhances your creativity

Games like Ticket To Ride engage your mind on a deeper level than most typical roll and move games. The theme involves building the quickest rail routes and it takes smart thinking and strategy to win the game.

Consistent decisions need to be made after every draw to make sure that you get maximum points and also try to get a route before another player on the board does. Meditation is one way to be in the present moment but playing a game like Ticket To Ride can also keep you present and alert.

Ticket To Ride is actually cheap

Okay, I know that the initial purchase might appear steep but in the long run you will realize that it actually saves you money. This is because you can enjoy playing games without having to pay money all the time.

Sure, the game might cost you $50 but if you play it hundreds of time over your life that comes out to just a few cents per play rather than spending $50 for one family night at the movies!

Even though some people might scoff at your interests in board games, don’t feel discouraged.

Everyone has different interests/hobbies and every hobby costs money. When compared to other popular hobbies, investing in Ticket To Ride board games is actually cheap.

So, The next time you doubt whether Ticket To Ride is worth it you just have to recall the value it adds to your life, which is – increasing social gatherings, engaging the mind, encouraging creativity and offering a wide variety of themes and styles.

Board games in general might seem expensive, but as mentioned above there are good reasons to justify the cost. A lot of energy and effort goes into creating amazing and creative board games that can keep players entertained while also enjoying playing the game over and over again.

The next time you see a Ticket To Ride game with a high price tag don’t put it down and move away just yet. Think about all the hard work that went into creating this wonderful game and then maybe borrow it from a friend first to see if it’s worth investing in it yourself or not.