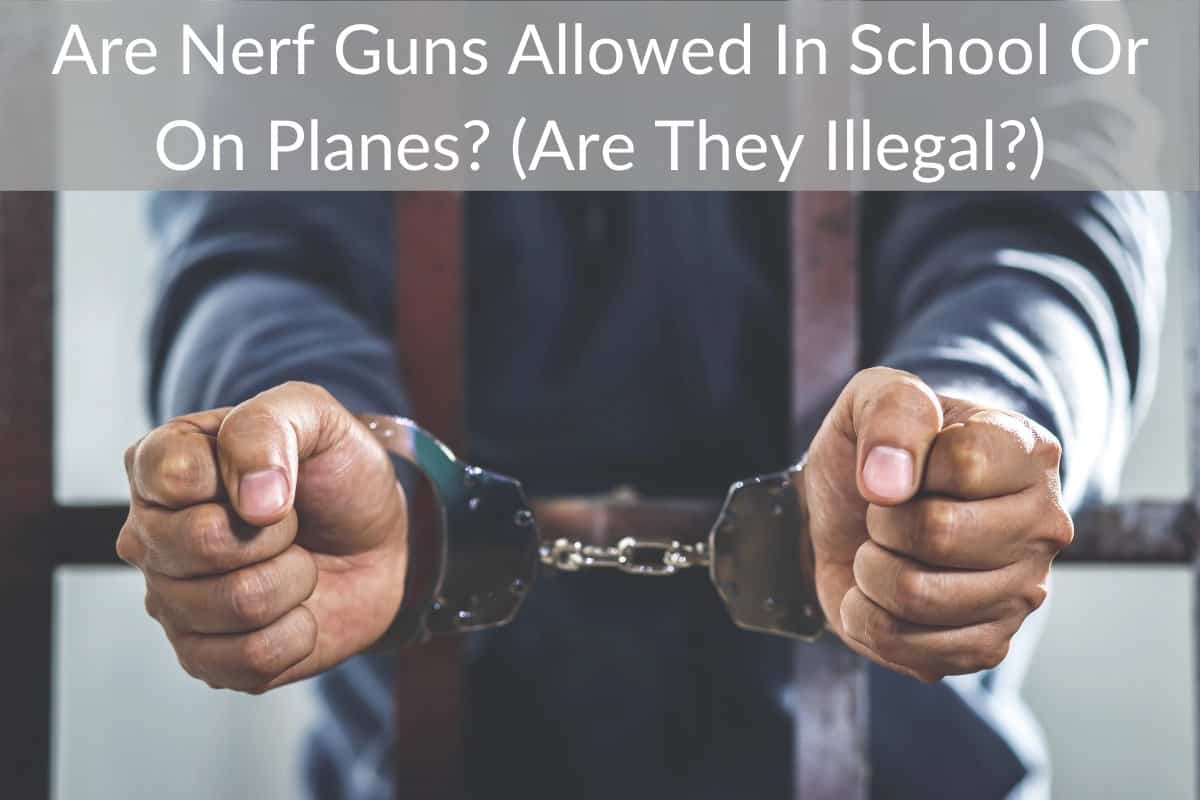 Nerf guns are one of the most popular toys among kids (and even adults). My kids have more nerf guns (and bullets) than we know what to do with and our youngest child is starting to find pleasure in playing with them as well.

Just the other night my wife had a nerf gun war with all three of our kids.

But what are the safety concerns with them?

Are Nerf guns really not allowed on planes or in schools?

Nerf guns, along with any other toys that resemble weapons, are not allowed to be displayed or taken into school buildings. They are also only allowed on planes when they are in a checked bag (they aren’t allowed in carryons).

When I was growing up and in elementary school it was common practice to bring toy guns, knives, or swords in for show and tell. It was also very common to have some sort of weapon with our Halloween costumes.

Think knives or swords with your Power Ranger costumes and a scythe for the Grim Reaper.

Now that I am raising my own children, things have changed drastically. Kids are now no longer allowed to have anything that resembles a weapon while at school. Exceptions aren’t even made for Halloween costumes.

In fact, when my oldest child was about four, she decided to go as a ninja for Halloween. That also meant carrying a big plastic sword in a loop at her waist.

I had to work the night before, so my dad loaded him up with his costume for his parade and costume party at school and, without thinking, brought the sword along with him.

Long story short, it was not received well by the daycare center, and we got a lot of heat for it.

This is due heavily to the amount of violence that is happening in today’s society. After so many school shootings, schools have now implemented a no tolerance policy for all weapons on school grounds including toys.

Most schools do not even allow for children to make toy guns with their hands and pretend to shoot others.

The same goes for airports.

After terrorist attacks and mass shootings, it is better to err on the side of caution.

Nerf guns and other toys based on weapons can have a very realistic look to them and can cause a lot of trouble if someone does not realize that you are holding a toy and not an actual loaded gun.

Are Nerf Guns Illegal To Take To School And On Airplanes?

Both schools and airports have rules about taking toy weapons (Nerf or otherwise) on the premises but does that make it illegal?

While Nerf guns are prohibited and you could get into a lot of trouble for attempting to carry them onto the premises, it is not illegal.

People have accidentally taken Nerf guns to the airport before not realizing they can’t and all that typically happens is they are confiscated by the TSA. The same thing is likely to happen in schools as well.

However, I do not recommend or encourage you to try and see if you can get away with it as it can cause a lot more trouble than what it is worth. Leave the toys at home from your classroom Halloween party and check it in your luggage if flying on a plane.

​Can You Have A Nerf Gun In Public?

​I have yet to meet a child that does not love playing with Nerf guns. My kids have Nerf gun wars outside in the yard with their friends on a very regular basis. But is it legal to do so?

​The answer to this question is kind of a gray area.

​While Nerf guns are marketed to children and are not illegal, they can cause trouble if they are carried around in public. This is especially true if they have been painted or altered to look more like a real gun.

My advice would be to only play with Nerf guns that are very clearly toys and look fake.

I would not carry any replica weapons in public as it could cause confusion and further trouble. If approached by law enforcement you should immediately place the weapon on the ground, back away from the Nerf gun with your hands up until the Nerf gun is out of reach and follow any and all instructions given to you by the officer.

​There could be further trouble with the general population as they are not trained to handle these kinds of situations. Civilians could have any number of reasons to fear for their life if they were to see someone carrying what they believed to be a loaded weapon in public.

​While Nerf guns are a fun toy, I would not recommend taking them out in public with you.

If you are playing outside with them, please stick close to home and again, make sure that they are very clearly a fake weapon. Keeping the neon and bright colors would be the best options as true guns typically do not come in those colors.

It is great to have fun outside, but always be cautious and aware of your surroundings.

​Is It Illegal To Spray Paint A Nerf Gun Black?

​We have talked about the joys of playing with Nerf guns and the dangers of carrying toys that look like real weapons, but is it actually illegal to have toys that resemble real weapons?

​There is no law regarding the act of painting a toy to resemble a real weapon in the United States. The toy is yours to do with as you please.

​However, while there is nothing illegal about it, I would encourage you to make sure that any toys that are replicas of real weapons that look realistic are kept at home.

Displaying anything that resembles a real weapon in public could cause a lot more trouble than what it is worth for a small amount of fun. There have been numerous documented cases of individuals being shot for carrying toy weapons.

In these cases, the shooter believed that the person was carrying a real weapon. To avoid this it’s best in my opinion to never paint a toy where it looks real.

Afterall, there is a reason that Nerf guns are typically orange and brightly colored. So that way there is no possible confusion.

Although Nerf guns aren’t really unsafe in regards to being able to seriously hurt someone, you still aren’t allowed to have them in schools or on airplanes (unless they are in your checked baggage).

Nerf guns are great fun to play with but I would recommend you keep the fun at home or in your yard to prevent people from getting the wrong idea about what you are doing.

This is the same reason why I would never recommend anyone paint a toy gun so that it looks real.