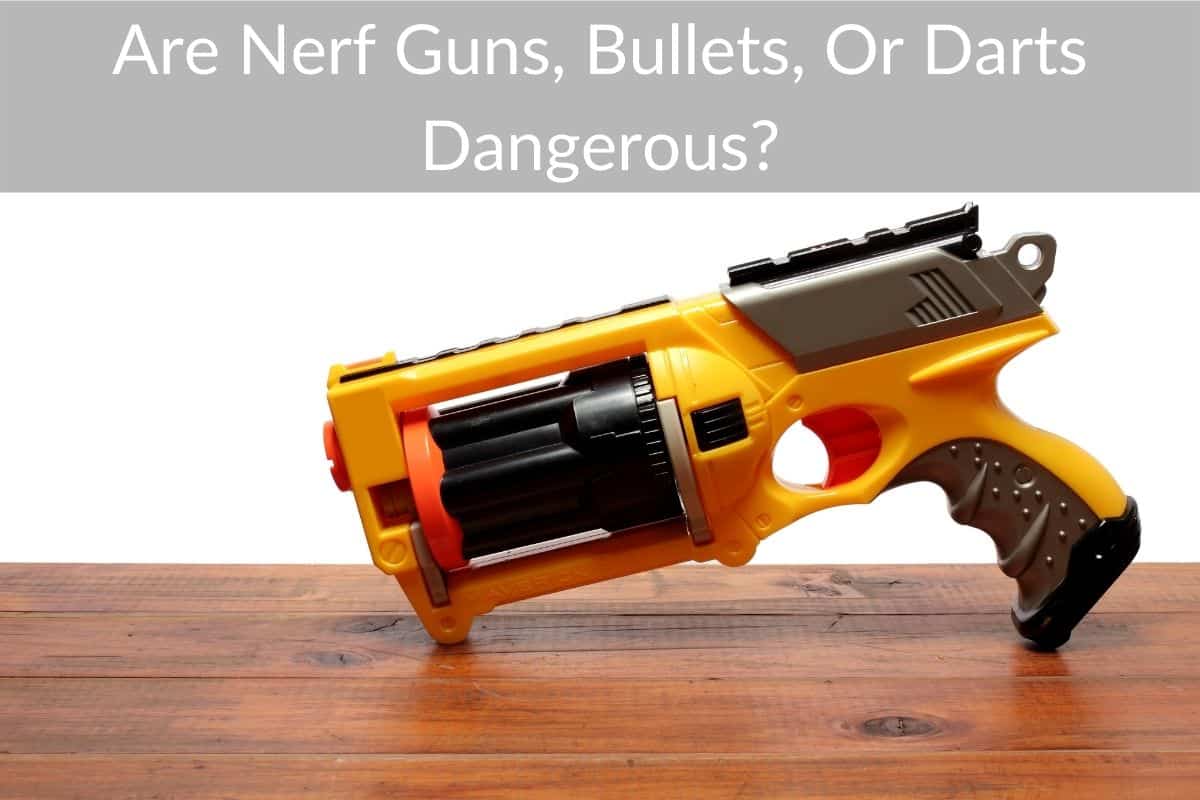 Are Nerf guns, bullets, or darts dangerous? This question usually comes from concerned parents wondering if it’s a good idea to let their child have a Nerf gun.

Nerf guns are super fun for children and adults alike UNTIL someone damages their eyes. But are these darts actually dangerous if you get shot in the eye with them?

Nerf darts/bullets can be dangerous if they hit you in the eye which is why Nerf recommends that everyone who is using one wears safety goggles. Beyond being hit in the eye there isn’t much danger to a Nerf gun since they don’t fire the darts very fast.

If you’re pondering the pros and cons of getting your kid a Nerf gun, this guide is for you.

How Dangerous Are Nerf Guns?

It’s natural for people to believe Nerf guns are safe because their bullets are quite soft. How hard could they hit, right?

However, it’s not about how hard the darts can hit but where they hit. Projectile toys like Nerf guns have been reported to cause eye injuries. From corneal abrasion (scraping or scratching), pain, and internal eye bleeding to cataracts, blurred vision, detached or torn retinas, and increased eye pressure, anything can happen.

Blurry vision usually occurs as a result of swelling of the retina after a traumatic eye injury. In worst cases, temporary or permanent vision loss is also possible.

Case in Point: A Woman Who Got Hit in the Eye with a Nerf Dart

A case documented in the Canadian Journal of Ophthalmology described how a woman suffered after a Nerf dart fired from almost 200ft away accidentally hit her in the eye. The “soft” bullet caused a tear in her retina.

Thankfully, she got treated in time by Dr. Matthew Tennant, an expert eye specialist at the University of Alberta, and recovered. If the damaged retina had been left untreated, she could have lost her vision permanently.

Does This Mean You Shouldn’t Purchase A Nerf Gun?

Now that you know the answer to the burning question of whether Nerf guns or darts are dangerous, you must be wondering if they are even worth buying.

Personally, I would say they still are.

By highlighting the dangers of playing with Nerf guns, I want to stress that you (and your kids) must take proper precautions before engaging in a Nerf war to avoid accidental injuries and lifelong regrets.

Apart from the accidental hitting in the eye thing, Nerf guns are overall pretty safe. They have only a few movable parts and lightweight sponge darts for ammo.

Moreover, they don’t have lead paint. The power is also very limited so hitting someone anywhere besides the eyes shouldn’t hurt them.

So just make sure everyone wears eye protection and your Nerf gun fight should be just fine.

Following Nerf safety tips is critical for everyone playing. Whether you’re having a family battle or you’ve invited the whole neighborhood for a long-range campaign, you must ensure everyone knows the dos and don’ts of playing with these toy blasters.

1. Avoid Looking Down The Nerf Barrel

Most of the accidents with Nerf guns happen when amateurs look down at the barrel of the Nerf gun, not aware that it’s loaded or cocked. Accidental discharge can happen in such a case, putting your eyes at risk.

Even the softest Nerf bullets can cause significant damage to the eye when fired right into the eyeball from a close distance.

One way to avoid any mishaps as mentioned above is by storing your Nerf guns properly when not in use. This will also eliminate the risk of misfires.

Always be aware of whether or not your Nerf gun is loaded. If loaded, avoid leaving it lying around as a younger child could get it and shoot a dart at their eye.

It’s very common for unsuspecting victims, including pets, to be accidentally shot.

One of the most basic Nerf safety tips is to keep your finger off the trigger until you’re ready to shoot at the target. Moreover, your Nerf gun should always be pointed at the ground. Flinging it around is an amateur practice.

Often people end up shooting someone accidentally while they’re distracted because they weren’t aware of where their Nerf gun was pointed at.

4. Avoid Aiming For The Head

Before you commence a Nerf battle, don’t forget to announce that shooting for the head is NOT allowed. To be on the safe side, encourage all players to aim for the body and make sure they wear safety goggles.

Although the Nerf darts are made of soft foam, headshots must be avoided to eliminate the risk of a bullet taking some grit with it and hitting someone in the eye.

Sometimes people get hit in the eye despite following the precautions discussed so far. This is where safety glasses come into the picture.

You must always wear safety glasses no matter how great you’re at Nerf battles. It’s better to be safe than sorry.

While Nerf guns are pretty cool and exciting, they’re not worth getting your eye damaged or losing your sight over.

You may be tempted to shoot every moving thing that you see, especially if you’ve recently gotten your hands on a Nerf gun.

You’re strictly advised against shooting people who aren’t a part of the game. It’s also best to play in an area where there are no extra people.

If you find yourself around a non-participant, waste no time in calling a truce and shifting locations.

Even if nobody gets hurt, you might get tongue-lashed by a few people with kids or those not comfortable surrounded by a bunch of Nerf gunners.

Shooting animals with a Nerf gun is also not cool. Your pet may stop trusting you if you do. There’s also a good chance you’ll have to deal with a hostile interaction the next time you approach your furry friend.

I hope this article answered your question about Nerf guns and darts and whether they are truly dangerous.

I think this toy is super cool, but there’s no point in buying it if you can’t respect the game’s rules. A Nerf war should be safe and fun for all, including the bystanders and animals.

So, make sure you wear safety goggles and avoid pointing at or shooting people when they’re distracted.

If you follow the above Nerf safety tips, you won’t have to worry about getting hurt or hitting somebody in the eye.