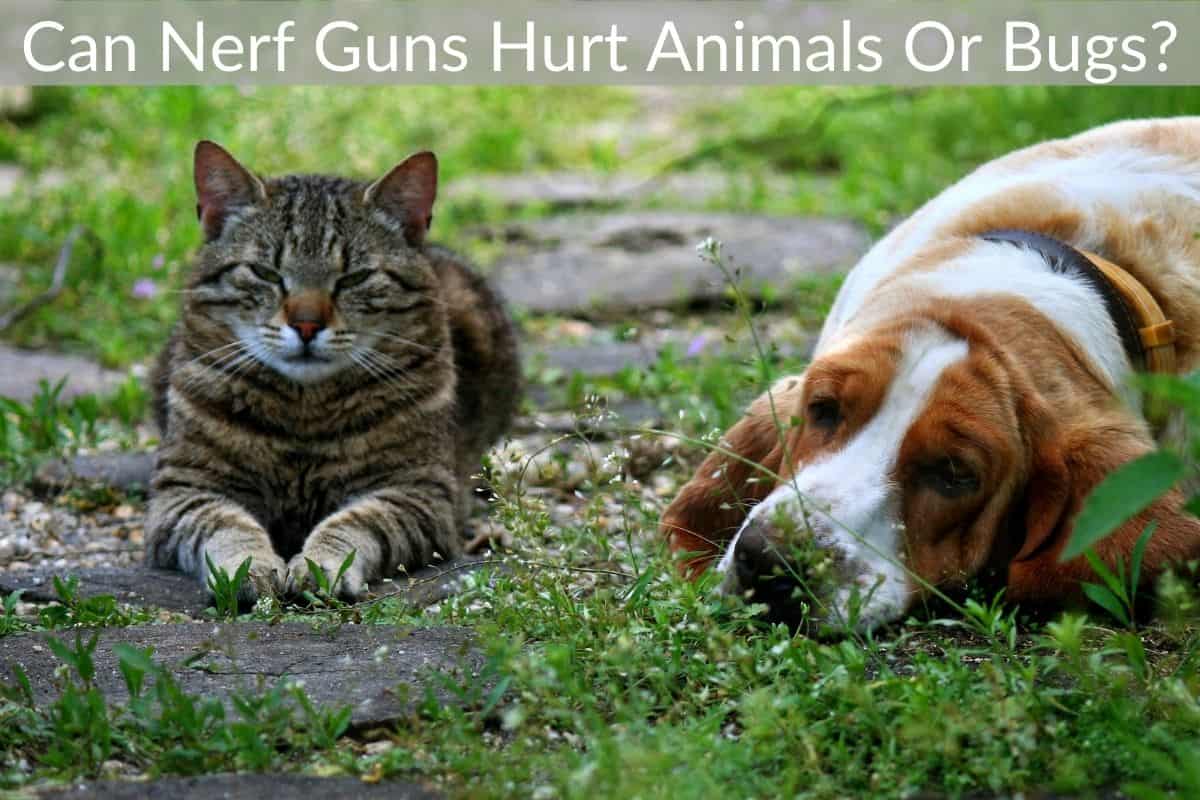 Nerf guns are tons of fun. Children and adults alike love to play with them.

Nerf guns can be used for a variety of activities where only the child’s imagination is the limit. Many teens like to have Nerf gun wars in large groups and siblings even get excited about playing around the house.

Sometimes, Nerf gun wars at home can get a little carried away and there may be some unintended targets such as pets.

I know that I grew up with Jack Russel terriers in the house. Having just one in the house can be crazy enough, but two and three make for a circus all the time.

I loved those dogs and my cousins loved their energy. My cousins would visit often and we played all kinds of games.

The dogs always got caught up in our energy and ran around with us everywhere we went. In the excitement of the play, they barely noticed anything that hit them unless they got knocked over or bonked pretty hard on the head.

During the time we played with Nerf guns in the house (without Mom knowing) the dogs may have gotten hit a couple of times with those Nerf darts. I’m very sure that those dogs had no idea that they got hit at all.

Nerf guns will not harm most animals unless they hit them in sensitive areas such as the eyes or a wound. Bugs may be moved or knocked out of the air, but Nerf guns will most likely won’t hit them anyway as foam darts aren’t exactly accurate.

Small dogs and cats will probably not even feel a Nerf dart even if it is fired at close range. They are low impact and meant to be for fun.

Rodents and other small pets may be inconvenienced or feel some discomfort, but they should be fine. I do suggest stopping children from doing it repeatedly though.

If they don’t learn to treat the animals with respect, they could endanger the animals later on with a more powerful object than a Nerf gun.

Bugs will not be killed unless you improve the Nerf gun with some modifications, but if you do that you will probably be more aware of the power of the gun.

If you are worried about your pets getting injured during Nerf wars, I think they are more likely to accidentally get kicked or knocked over by some distracted kids running from their opponents than they are from a stray dart.

Can A Dog Die From Eating A Nerf Bullet?

Dogs tend to eat a lot of things that we would find disgusting or bad for them.

Every dog is different and goes for different things. My dog Spanky only ever ate bugs that moved too quickly through doorways, and Darla only ate actual food.

Alfalfa, on the other hand, eats anything that moves be it falling leaves, a passing insect, a laser pointer, or in this case a Nerf dart. (My dogs were named after the Little Rascals because they are troublemakers.)

If you catch your dog eating a Nerf dart, you should try to prevent it from swallowing it. If your dog is agile and attempts to avoid your hands in its mouth, you might find that he can swallow the dart easily.

Pay close attention to your dog for the next day or two to see if he has any behavioral changes. You should also watch to see if he passes the dart on his own.

Nerf darts should not taste particularly good to dogs, but they may eat them out of curiosity or if it happened to be covered in food scent.

Dogs can be unpredictable and you should pick up the darts that you can find after all Nerf gun activities. The darts are notorious for getting lost and destroyed so you may not be able to account for all of them.

Just watch your dog to be safe.

Can A Nerf Gun Break A TV?

Nerf gun wars inside are not always a good idea because houses do not have a lot of open space.

Furniture often gets in the way and can cause some trips or get knocked over by zealous, competitive players.

Nerf guns themselves are hard plastic and can hurt a lot of things. Nerf gun darts however are soft and small.

Nerf darts cannot hurt a tv, but Nerf guns can damage the screen if they are thrown at it. The most danger your tv will face from a normal Nerf gun (assuming no one is throwing them) is someone running into it during a Nerf war.

You may find that the players get a little too close or try to hide behind the TV. In their rush to escape, they may accidentally knock it over.

Some people may get a little carried away and move too quickly which may cause the gun to slip from their hands and fly across the room.

Nerf guns are going to hurt almost anything they get thrown at which is why they should be used with caution especially when being used inside.

The many Nerf wars I have participated in have generally ended before anyone got angry enough to throw the gun at a person.I know that the most common argument was whether or not we got hit.

The same competitive heat that comes from games involving honesty make it difficult to keep the game impartial.

I do remember shooting at my cousins while they ran across the room and it never crossed my mind that I needed to be careful about the TV in the room.

I never intentionally shot at the TV to see what would happen, but I know that the darts being shot during a game had a small chance of hurting the screen.

Nerf gun wars should be planned with caution and played outside if possible. Innocent bystanders such as family members or pets may accidentally get caught in the crossfire or run into while the opponents are traversing the hallways.