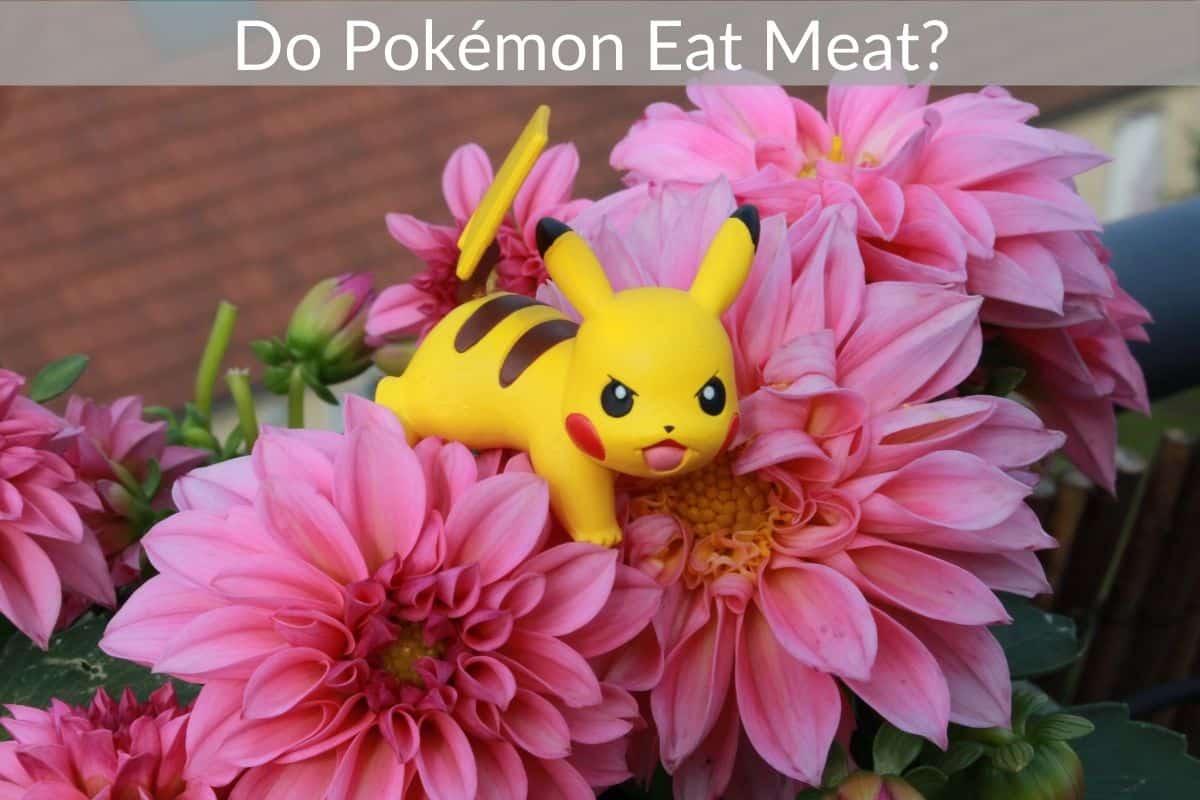 Anyone who has followed Pokémon for a while knows that Pikachu’s favorite food is ketchup. While it’s debatable if ketchup is even food, it’s still the thing that Pikachu loves and eats the most.

If Pikachu loves ketchup, does he put ketchup on meat or plants? We use ketchup on meat (chicken nuggets) and plants (french fries). So do Pikachu and the other Pokémon eat meat?

Since Pokemon are based on normal animals then they will often eat similar things to animals in our world which means some of them will eat meat/other Pokemon.

Typically when food is seen in the Pokémon universe it’s used as a reward for the Pokémon. Food is also used to heal the Pokémon and is usually apples and berries.

Sometimes special treats are made for the Pokémon such as Poké Puffs and Poffins. These are more like pastries than anything else.

It is up to the trainers what diet the Pokémon are put on, but typically the Pokémon’s diets consist of fruits and veggies as the majority of Pokémon are omnivorous.

Do Pokémon Get Eaten?

While many of the Pokémon are omnivorous, that doesn’t mean all of the characters in Pokemon don’t eat meat.

The humans in Pokemon have been shown eating meat at different times as well. While they don’t come out and say which Pokémon was served for dinner, the Pokémon are still just animals to the humans in the Pokémon universe.

There are multiple confirmed cases in the original TV show showing people eating Pokemon or even the Pokédex talking about whether a Pokemon tastes good or not.

So Pokemon do absolutely get eaten by the humans in the Pokemon world and they can also get eaten by other Pokemon!

The Pokémon universe is a vast and fascinating one. There are so many aspects that we still don’t understand, but can the Pokémon hurt humans?

Will a Pokémon lash out and attack a human?

There have been Pokémon that have hurt humans. Mewtwo is one of the most dangerous Pokémon and has a deep hatred for humans.

There are also a few Pokémon that are known to lash out when they feel threatened or even irritated. Some of these outbursts can cause injury to any human in the area.

Although humans in the Pokemon universe may have been injured by a Pokemon there have not been any mentions of death by Pokemon. However based on the massive amounts of power that some Pokemon have I would not be surprised if there have been human casualties in the Pokemon world.

What Are The Most Dangerous Pokémon?

Here are a few of the most dangerous Pokémon. I am glad these characters don’t actually exist because they would be quite terrifying.

Mewtwo isn’t just one of the most dangerous Pokémon because it’s one of the most powerful, but also due to its hatred of humans. Mewtwo is savage and has no empathy for any of those around it making it hard to reason with.

Mewtwo was created to be the ultimate fighting machine and also has the ability to mind control those around it.

While this Pokémon might be a cute one, it is also rather deadly. The Gorebyss lives in the water and can lure in its prey with its long eyelashes and smile. Once it gets close, the Gorebyss will stab its prey and drain their fluids.

Their violent nature makes them a lot less cute. While it may not be as deadly when on land, the Gorebyss will spare no mercy in the ocean.

No one loves getting stung by a bee, and especially not in the Pokémon universe. The Beedrill is a much larger version of our bees and is also crazy fast.

While you might normally be able to outrun a bee, in the Pokémon universe you’d better find shelter quickly. The terrifyingly large Beedrill will also travel in swarms, so if you see one, know that there is a swarm close by.

When you think of a turtle, you probably think of a cute, slow-moving animal and you’d be right. In the Pokémon universe however, the sweet Squirtle evolves into the terrifying Blastoise.

This 200-pound turtle doesn’t stay down when on his back, his powerful water cannons are strong enough to cut through concrete and steel.

While they are kind creatures, it’s still best not to cross them and find out just how powerful a blast from their water cannon can be.

This creature looks like something out of a horror, sci-fi movie and kind of acts like one too. Much like the Gorebyss, the Kabutops attacks its prey underwater and consumes the insides.

The Kabutops did go extinct hundreds of years ago, however, they can be revived. It is a creature that is too terrifying to think about reviving.

Another Pokémon that looks like something out of a scary movie; the Muk is basically a walking pile of toxic sludge. Muk’s stench is so bad that it can cause fainting.

Muk can kill plant life just by being close to it. Even an accidental brush up against Muk can result in severe sickness.

The Celebi can send anyone to any point in time resulting in some pretty catastrophic timelines.

Not only can the Palkia cause some pretty serious physical damage it can also cause complete destruction of reality. The Palkia is typically feared for its brute strength and fierceness, but the Palkia can also be a reality to whatever it decides.

It essentially has the power to completely wipe our version of reality off the map and create a new one in its place.

The Darkrai uses nightmares to terrify its prey. The Dark Void move will send its prey into a deep sleep and take over their dreams giving them never-ending nightmares.

The good news is the Darkrai doesn’t just use its evil powers on any prey, it typically will use the Dark Void move on those it feels threatened by. As long as you stay on Drakrai’s good side, you should have sweet, Darkrai-free dreams.

Whether they are just a danger to each other or a danger to humans, the circle of life continues in the Pokémon universe just as it does in the animal kingdom on earth.