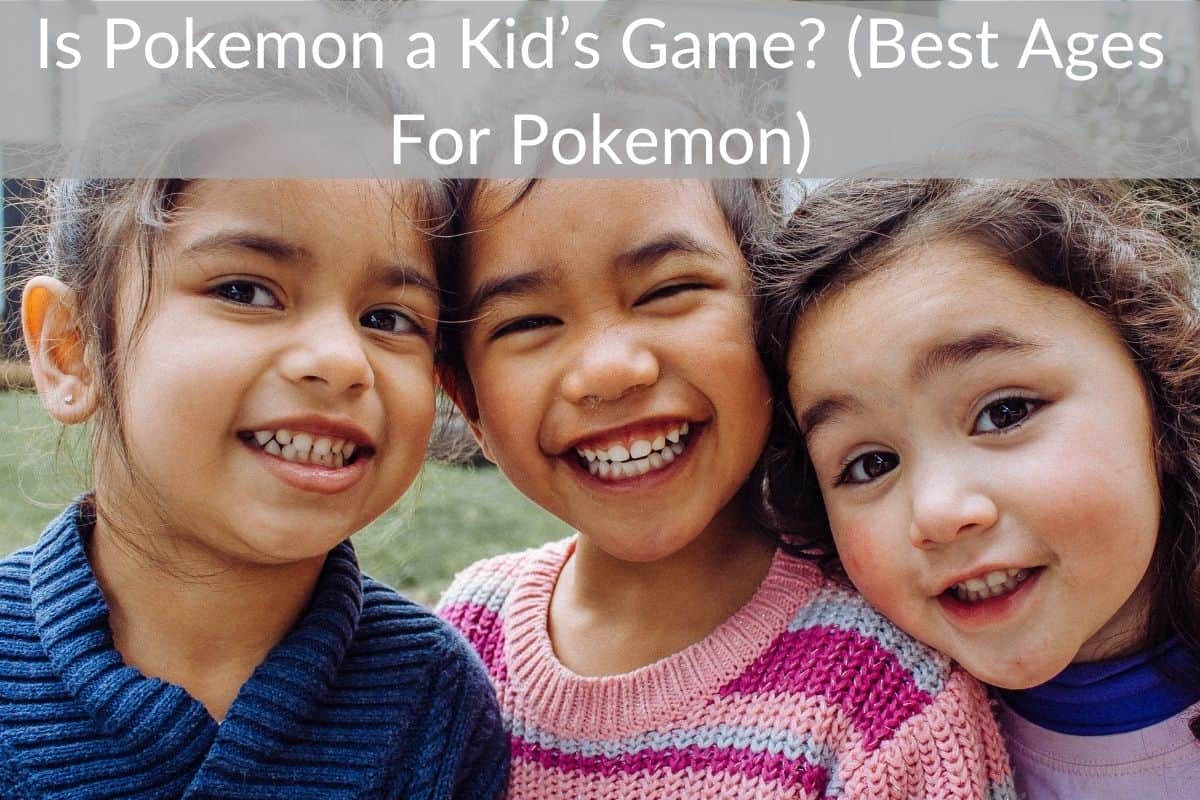 For those of us that are in our twenties or thirties, Pokémon is what we grew up with. We have the originals, we have the real experience, and maybe even a little too much of it sometimes.

But it was what we had. Pokemon wasn’t as easy to get back then as it is today. People now have it on their phones, on every streaming service possible, and even every gaming system that’s been created.

I think that it’s safe to say that anyone over 20 has the right to claim that Pokémon is appropriate for them. Can it be called a kids game though?

Pokemon is not just a “kid’s game” although many kids will enjoy playing or watching it. Because of the nostalgia that comes with Pokemon many people in their 20s or 30s still enjoy collecting and playing Pokemon.

I personally am not that into Pokémon, but I know plenty of my friends that are quite into it. Granted, there are other things that can be in the same boat as Pokémon that I love after growing up with them, so I am completely, 1000% in support of never calling Pokémon “just a kids game”.

Pokemon (my unprofessional opinion) could honestly be considered more of an adult game. Adults today are the ones that grew up with it and are often the most passionate about it. They are also the ones that have the money to invest in it and are willing/able to “waste” their money on it.

They can invest more time and can tell their own kids when it’s time to end for now. Kids today can’t appreciate the originals or the greatness that Pokémon was when it first was created.

So again I say, in no way is Pokémon just a “kid’s game.”

To see the most popular Pokemon accessories and gadgets just click here.

What Ages Are Appropriate For Pokemon?

We all went through it when we were kids. We loved the excitement of the latest and greatest Pokémon. Those that really were into it, especially.

We all had that groundbreaking age that allowed us the privilege to enjoy Pokémon, but things have changed since we were kids. What is an appropriate age now for a kid to start playing or collecting Pokémon?

Any child who is 8-10 years old is old enough where they will enjoy the intricacies of battling or collecting Pokemon. Most kids younger than 8 won’t enjoy the game or TV series very much.

Unlike the augmented reality game Pokemon Go, a collaboration between Niantic and Nintendo by way of the Pokémon company, the latest Pokemon game is not focused on capturing Pokemon, battling and raids. Instead, it’s filled with activities appropriate for those ages 3 to 5 years old.

Let me say just one thing first, ew!!! What!! Do we really need this version of Pokémon? Did they really HAVE to change it up just so that a 3 or 5 year old could play the game.

Don’t get me wrong, start them while they’re young, especially if you are a passionate parent and want your kids to feel the same as you, but give them the real thing.

And if you don’t think that your kid can handle it, don’t give it to them. Although I am a parent I personally do not think that 3 to 5 years old is a good age for Pokémon. If they have to change up the game to make it “appropriate” for them, they are not ready for it.

So, we see that ages 3-5 is probably not the best time for kids to get very into Pokémon, they just won’t appreciate the awesome, original game that is Pokémon.

The way that they had to dumb it down just so that it could be “appropriate” for them just doesn’t seem right to me. Original all the way!

So now that that age group is gone and out; lets go to the next age and explore if being 6,7, or 8 is a good age for Pokémon.

According to some people, a 6 or 7 year old may be able to play Pokemon: Sun and Moon. There is only one character that dies and it’s off-screen. Again, this one is a big, fat if.

Just because a character dies, doesn’t necessarily mean that it’s “not appropriate” for an age group. Well, like is said in the last part; if they can’t experience the whole thing, then I do not think that they are ready for it at all.

If you are going to be into something, then you should be able to experience the whole thing.

Since, some people think that a 6 or 7 year old can only play one version of Pokémon then what is the point of letting them play it at all. I know that when I like something and there is more than what I get to experience, then I have to be able to play the whole rest of it.

This is probably the case with a 6 or 7 year old, so, either all or nothing with this group.

Personally I feel like 6 or 7 is a little bit young for watching or playing Pokemon. However there are some kids that will be more mature than others at 6 or 7 so they may be ready to watch/play while other kids won’t be until they are 8,9, or 10.

So our next age group; 8-12. This has been chosen because we can go ahead and just establish that a teenager could go ahead and experience the whole realm of Pokémon in almost every case.

But right before they become a teenager, is it appropriate for an 8-12 year old to see and play the real Pokémon?

8-12 is the perfect age range for kids to start playing with Pokemon cards or watching the TV series. Neither the games or the TV show is extremely gorey or have any other extreme content so it shouldn’t be an issue for children in this age group.

However, this is definitely up to what the parents think this time.

As a child gets to this age, I think that they are mature enough to know what Pokémon is and what it is all about. At this age, the parents of the child can decide whether their own child is ready to be part of the Pokémon world.

From ages 3-7, I honestly think that a child is a bit too young to be part of the Pokémon world. But after they reach the age of 8-9, I think that they are ready as long as there is someone to guide them in.

At 10-12 years old, they should be able to figure it out and find things that they like and dislike, but from 8-12, their parents can decide whether they deem their kids ready.

The age of 13 and up are more than ready for the world of Pokémon. The game is more for this age anyway. Pokémon is played by adults more than kids anyways, it is for this reason that Pokémon should be called an adult game and not just a kids game.