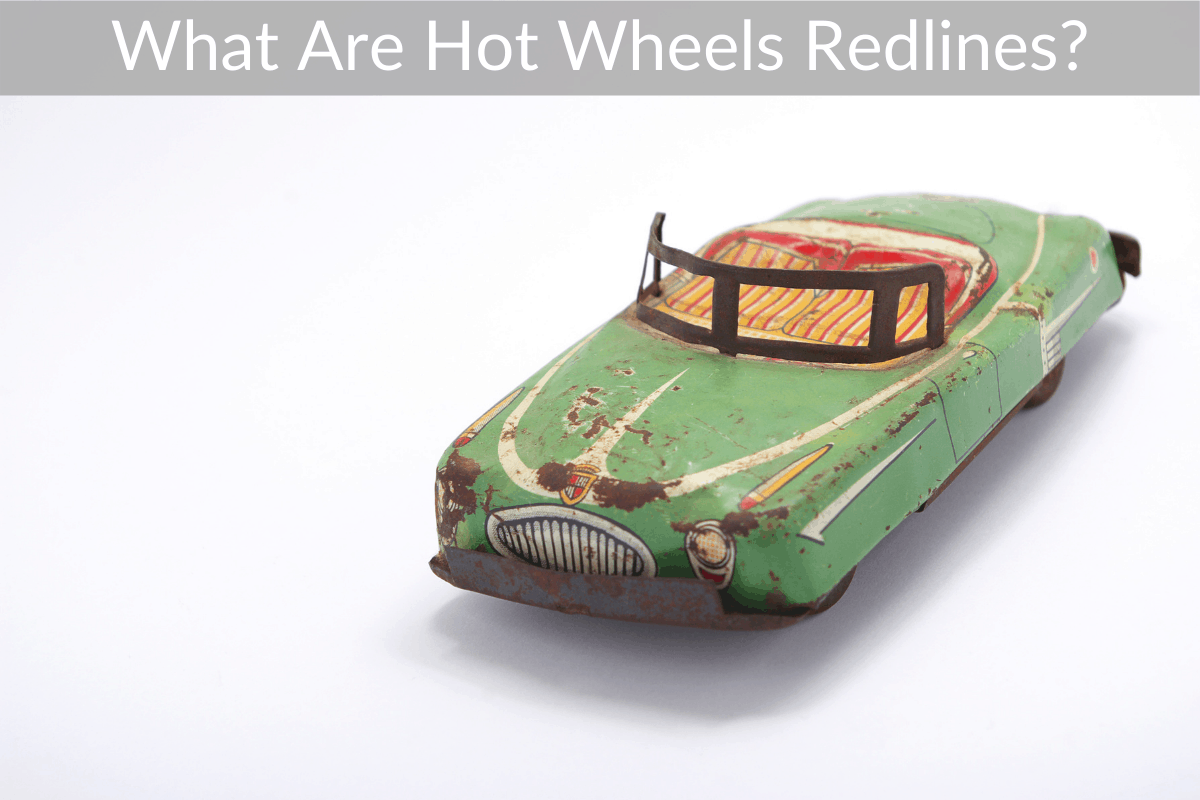 Hot Wheels cars have been quite an icon for many decades and it’s likely that you either grew up playing with them at your’s or a friend’s house. It’s something that many kids will surely remember and reminisce about (including myself).

Hot Wheels have been around since the 1960s, yet are still stocked and sold in most stores today. More than just toys, Hot Wheels are symbols of a colorful childhood and a valuable piece of history as well.

There are also a lot of Hot Wheels collectors and enthusiasts who collect older models from back in the 60s, 70s, and 80s. Because of the timeless designs and the fact that many of them were destroyed or lost, these older Hot Wheels are valuable collector’s items.

Some of the most sought-after Hot Wheels models are Redlines.

Hot Wheels Redlines are those cars that were manufactured within the first 10 years of the brand, namely from 1968 to 1977. They are easily identifiable because of the red line that are on their tires (hence the name).

Because they are considered to be the first Hot Wheels, they are typically very valuable and highly sought-after pieces. Of course how valuable they are really depends on the condition of the cars and how collectible the model is.

One thing to note is that they have made “Heritage” releases of the redline cars as well (check them out here) so if buying redlines make sure you know whether they are the originals or the remakes.

The models manufactured and produced during the first 10 years of Hot Wheels are called Redlines.

They are characterized by their tire, which displays a red line outlining the tire. This was the standard wheel design for Hot Wheel cars in the early days.

As a result, the era from 1968 to 1977 was called the “Redline era”. These models were only manufactured in the United States and Hong Kong, hence their exclusivity.

Though the red stripe was the standard tire design for Hot Wheels cars during that era, there were also different variations when it came to wheel sizes, types, and designs.

With that, not every Hot Wheels model with red lines outlining the tires are part of the Redline series.

To determine if a car model is a Hot Wheels Redline, one must do their research about the model’s manufacture date and see if it was made any year between 1968 to 1977.

The chassis should also indicate the place of manufacture or country of origin being either the US or Hong Kong if it is a Redline. If these two conditions are met, then the model is a true Hot Wheels Redline.

Later models manufactured after 1977 are no longer part of the Redline series since the brand abandoned the red line design and instead used more basic tire designs ever since.

Models manufactured after 1977 and before 1993 were called Blackwalls or Basic Wheels.

Hot Wheels revived the red line design in 1993, however, models from this era are not part of the Redline series. It is easy to tell whether you have the original Redline cars or not as the 1993 versions were made of plastic while the originak redlines were made of metal.

How Do You Know if Your Hot Wheels Are Redline?

To find out if you have a true Hot Wheels Redline car, three conditions must be met:

Of course with just three simple things it seems it would be easy to know if your Hot Wheels cars are Redline but determining the manufacture date is not as simple as it sounds.

If you are a Hot Wheels owner, you would have looked at the date imprinted under the car’s base. However, these reflect the copyright date and not the manufacture date.

The copyright date is when the brand received the license for the car’s design and name. The manufacture date, on the other hand, is usually the year after the copyright date.

To determine the true manufacture date, the best thing you can do is to conduct your research on the Hot Wheels car’s model.

Another way is to be attentive and aware of the models that were produced during the Redline eras. Other indications that can give away a true vintage Redline are:

Note that the Spectro-flame paint was also used for another classic series, but these did not have the red stripe on their wheels.

What Are Redline Hot Wheels Worth?

Hot Wheels that were created during the Redline era are worth a lot, considering that they were the first generation of Hot Wheels.

They have become vintage collector’s pieces and if you happen to have kept some old Hot Wheels that are true redlines, enthusiasts would pay quite a bit money for them.

They may not be worth thousands of dollars each and make you rich. But they are worth far more than ordinary, brand new Hot Wheels that you can find in toy stores today.

Hot Wheels Redlines are sold at a price of around $10 to $40 per car today, but some collector’s pieces that are in pristine condition from the Redline era can fetch up to $200 to $400 each (or more).

Some of the Most Expensive Redline Hot Wheels

The 1969 Pink Rear-Loading Beach Bomb is one of the most sought-after Hot Wheels collectibles. It is currently valued at $175,000!

This is because there are only two true models of its kind known to exist.

Like the previously mentioned Hot Wheels model, this Over Chrome Mustang produced in 1968 only has two models in existence, which is why it is now worth $40,000!

One of two models now finds its home in a Hot Wheels collector’s private collection.

While not as rare as the previous models mentioned, this Over Chrome Camaro is still worth a lot since there were only about 20 pieces created.

It’s value is because of its fame as its antifreeze or lime exterior made it a superstar of Hot Wheels commercials. Now, this model is worth $25,000.

1969 Mighty Maverick with Mad Maverick Base

The fact that this model is now valued at $15,000 may be a surprise, considering that there are tons of Mighty Maverick Hot Wheels in circulation.

But many don’t know that there are rarer versions of Mighty Mavericks, which have the “Mad Maverick” title imprinted on its base.

There are only very few Mad Mavericks because Hot Wheels had to change the name after encountering a copyright issue. These types of rarer or “errors” are very much sought-after among collectors.

It’s been over 50 years since Hot Wheels were first introduced and as the brand gets older, the first-generation models become more and more valuable.

The Redline era was the time when the brand rose to fame and made a name for itself. Hence, these Redline models from 1968 to 1977 are truly valuable.

Whether you keep a Hot Wheels Redline in your collection or you want to sell it to collectors and earn its worth, know that you have a valuable piece of history in your hands even if it isn’t worth the tens or hundreds of thousands like some other models!