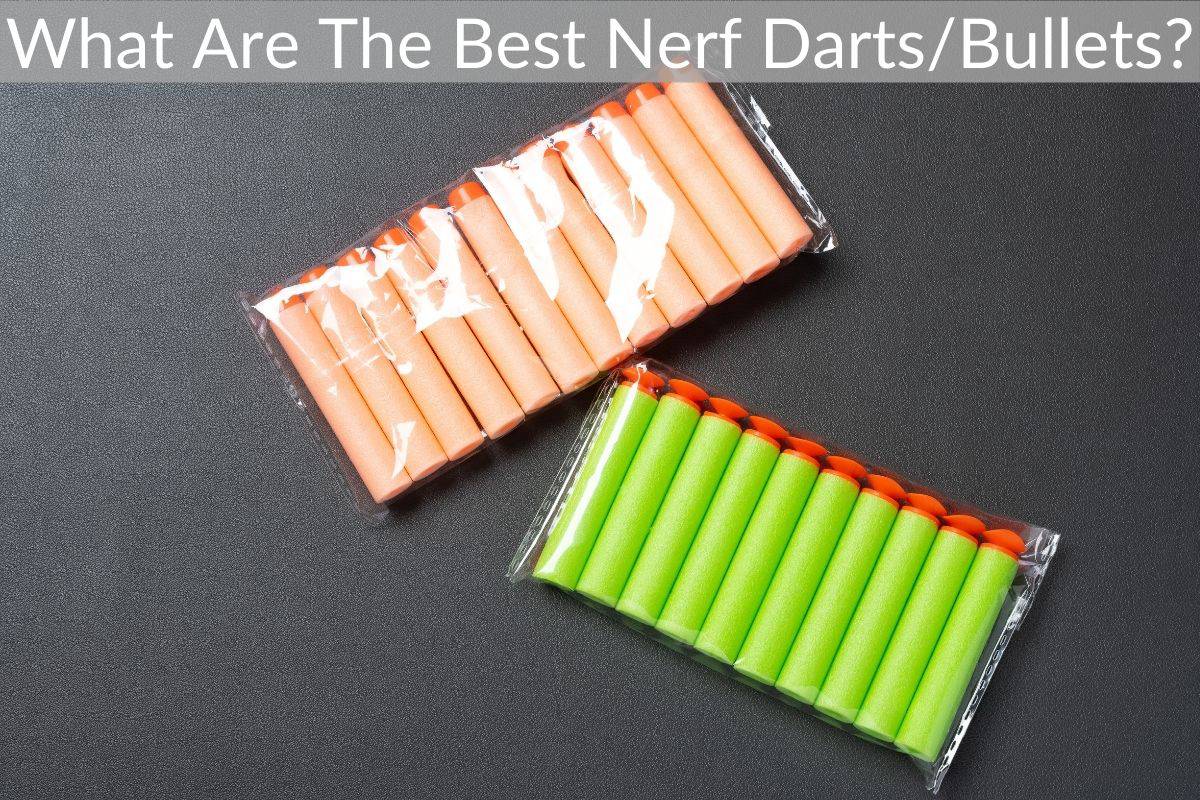 If you are into having Nerd wars with your friends—whether you are a child or an adult—you want to make sure that you are fully prepared with your equipment. Make sure you have the right gun, the right armor, but most importantly, you want to have the best bullets that you can find.

Why are bullets the most important thing, you may ask? Well, without the right ammunition, you don’t really have a chance of getting anyone out.

You could survive for a while if you hide, but you are not coming out on top.

Nerf is a serious game for enthusiasts (you may very well be one of those) so that is why it is important to know the right bullets to get. You need to know the best ones for each Nerf gun, and for each type of terrain.

You also might need different Nerf darts if you have a specific goal in the games/battle or a certain strategy that you follow.

There are better bullets for each situation, and you should know what you are getting when you purchase them.

For the best bang for your buck, you will want to go for the Coodoo 500 PCS refill darts with soft targets and storage bag.

Don’t have the best aim and it takes a few shots to hit someone in battle, or you want to get some target practice in; this set is the one for you.

Are you about the long range and sniper feeling?

Go for the Nerf Basics set. These are good for a quick refill and can shoot up to 70 feet.

Next, if you want to have a battle in the dark or at night, the Star Wars Nerf GlowStrike Dart Refill would be fun to try out. These bullets are designed after real weapons from famous movies and they glow in the dark; and you will definitely love the Star Wars theme if you’re into that.

The next item on the list is the Nerf AccuStrike 12-dart refill.

These darts are meant for the people who are looking for improved accuracy, they have an altered airflow and better weight distribution within the design. They work best with the Nerf Elite and AccuStrike series blasters.

Lastly, do you want the one you are targeting to hear the bullet coming, and know that there is nothing they can do about it? The Nerf N-strike MEGA Dart will make for a fun moment for you.

You can hit your target and see the expression on their face when they hear it coming, but don’t see it.

Are All Nerf Bullets The Same?

You may wonder if all the Nerf bullets that you or your child has are the exact same. I mean, they all came in different packs and with different guns and they are different colors. What’s the deal?

Not all darts with Nerf are the same, they are all made with a rubber tip and foam body, but there are other factors that play into the design of the dart. Although most Nerf bullets will work in other Nerf guns that isn’t always the case.

Depending on the Nerf gun series that you are using will determine the type of bullet that works best with it.

Not every bullet goes with every gun with Nerf.

There are four main types of Nerf dart blasters:

Each one can use just about every bullet, but each one works better with the bullets that it was intended for.

Another thing that comes into play is the magazine.

Most Nerf magazines are interchangeable and come with different amounts of rounds that fit. The magazine Nerf blaster guns will only take streamline darts that have smaller tips.

Elite darts, as of 2013, are the standard darts, they are compatible with both regular and magazine system Nerf blasters.

You may have some concerns about your children playing with Nerf guns and Nerf bullets; and it is not wrong to feel the way you do. What if they get hit too hard? What if they poke an eye out?

These are some genuine concerns on your part. But you can be put at ease, as nothing that serious should happen with a Nerf gun or bullet, unless intentional.

Nerf bullets will not hurt unless shot point blank and even then they won’t pierce the skin. However, they can hurt your eyes so it is recommended that everyone wear eye protection when shooting Nerf or being shot at.

A far out there question that may be asked is: Can a nerf gun kill people? No, absolutely not, darts cannot travel fast enough to kill someone. If someone did for some reason try to make them go fast enough, the dart would just explode upon impact, with maybe just a little sting and red mark as the end result.

Another thing that has a small chance of happening, is a dart hitting someone in the eye, this can be painful to a degree, but nothing detrimental should happen to the “victim.” An easy solution to this worry, is to just have your children wear eye protection while playing.

Again, you may have some genuine concerns about playing or having your children play with Nerf guns, but there is no need to worry. Take some precautions, but don’t go overboard.

Nobody ever died from playing with Nerf darts and guns.

What Is The Largest Nerf Gun Ever Made? (Is That Even A Thing?)

You must know that someone is always trying to set some type of record for something very insignificant. There is always that one guy who tries to create the biggest one of an item, but a Nerf gun, really? Has anyone ever attempted to do that?

Someone actually has built the world’s biggest Nerf gun and it is even in the Guinness Book of World Records. This record setting Nerf gun is over 6feet long and shoots pool noodles for darts!

But, why? What is the point in doing something like that? I’ll just say that your guess is as good as mine.

The person that built the world’s largest nerf gun was Mark Rober. His nerf gun was six feet long and it shoots pool noodles for darts.

For the rubber suction tip, he used a toilet plunger. The gun will shoot a dart at 40 miles an hour for about 50 yards.

What?! That’s crazy, but that is the world’s largest Nerf gun and bullets.

So back to the beginning question, there is not necessarily a best Nerf dart as it all depends on your preference, and on what type of shooting you want to do with your Nerf gun.