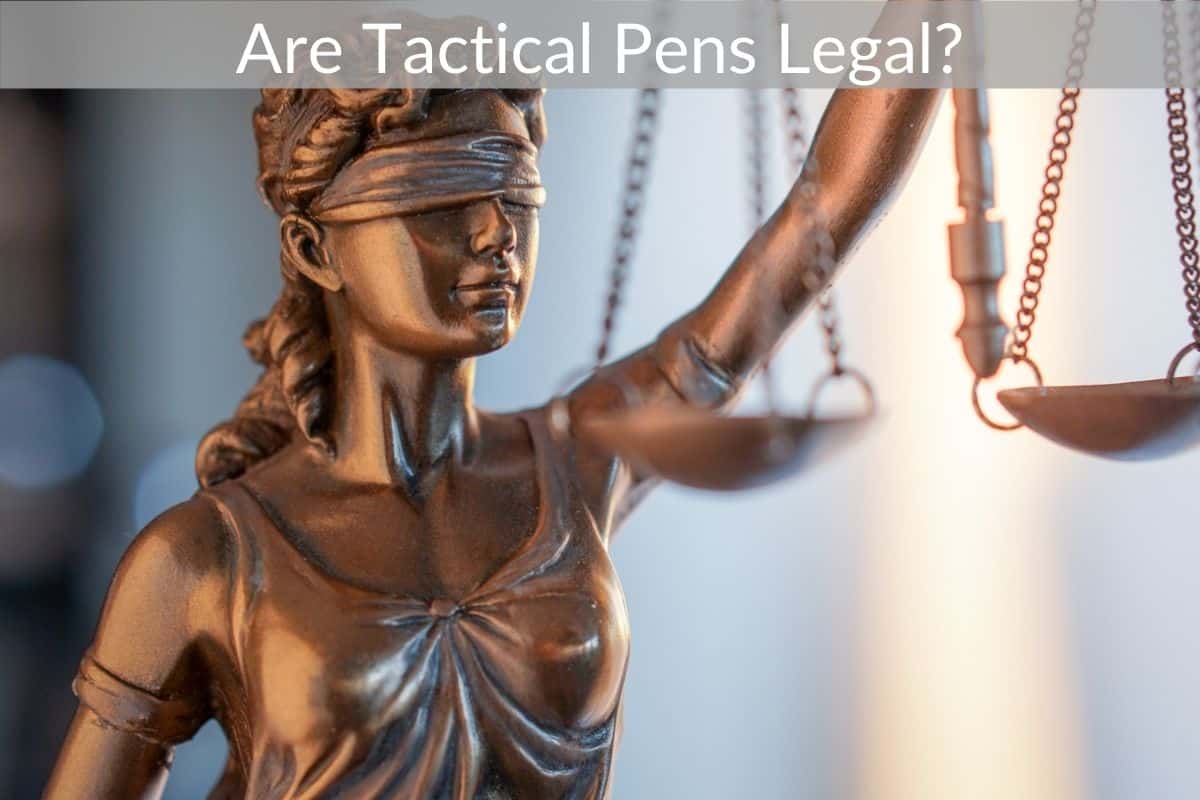 Tactical pens have become quite popular over the past few years. Spy movies have been using different forms of tactical pens on the big screen for years and now they are available for anyone to purchase.

Tactical pens are multi-functional; you can cross off items on your shopping list and then if needed protect yourself from your attacker with these pens.

Tactical pens are equipped with a blunt end. With enough force behind the blow, your tactical pen can even break through glass. The tip of the pen has an extra-sharp ballpoint tip, this can be used against your attacker if needed as well.

Some tactical pens also have extra features such as knives, lights, lasers, and a handcuff key. Tactical pens are not only a writing instrument, but can also be considered weapons.

Since they can be considered weapons, are tactical pens legal to carry?

Tactical pens are legal in the United States. In areas where firearms are frowned upon, tactical pens may be your best option to protect yourself.

Many people keep tactical pens in several places to ensure their safety. If you are traveling, this can be a great tool to keep yourself safe in unpredictable environments.

To see the most popular tactical pens just click here.

Can You Take A Tactical Pen On A Plane?

Tactical pens are very effective and can even break through glass. At the airport, you have to empty all your pockets and get your personal belongings scanned. What about your tactical pen?

If your tactical pen has a knife concealed inside, your pen will for sure be confiscated.

If your tactical pen looks more like an actual pen instead of a self-defense pen, it might be able to get through security. Your pen will most likely not attract attention.

However, if the TSA notices your pen, it will likely get confiscated.

The TSA is allowed to confiscate any weapon. When your tactical pen gets scanned there is the possibility that it can get taken.

Are Tactical Pens Good For Self-Defense?

English author, Edward Bulwer-Lytton, coined the phrase, “The pen is mightier than the sword.” While he meant that the words written by the pen can destroy a person in just a few strokes, I’m sure he never considered an actual pen could damage anyone.

Tactical pens are great for writing and can write in any type of weather condition. However, they are also used for several other purposes.

Can tactical pens be good to use for self-defense?

A tactical pen would be a great tool for self-defense. There are even tactical pens that capture your attacker’s DNA.

Unfortunately, if you ever need to use your tactical pen for self-defense, this means that you would need to be in close quarters. It can be a terrifying situation to be placed in, but your tactical pen can be your best ally in making sure that you make it home safely.

How Do You Use A Tactical Pen?

No one ever thinks that something unfortunate can happen to them. However, with all the trafficking that is happening around the world today, it can happen to anyone.

A pen is something small enough to always carry with you. While mace may be a great self-defense tool, when you spray your attacker, you also may get part of the spray in your eyes rendering you immobile for almost as long as your attacker.

Pocket knives are also a great self-defense tool, but unfortunately can be confiscated at many checkpoints. A tactical pen can usually go undetected as just a normal pen and may be the best tool to protect yourself.

How do you effectively use a tactical pen, if you ever need to use it?

If you find yourself in need of using your tactical pen the best way to use it is by:

I will go into more about each of these steps in more detail below.

When you pull out a pen, your attacker will be taken back at your choice of “weaponry” but won’t typically feel threatened. As they continue to move forward, be sure to strike quickly.

You can either use the sharp ball-point end, or the glass shattering end to deal a devastating blow to your attacker. Your attacker won’t have time to process what’s happening, and when you know you’ve dealt some good blows you can run away safely.

Know Where To Effectively Strike

There are key points on the body that can’t handle certain blows. For example, a knife to the forehead isn’t going to do much other than make your attacker bleed.

However, you will be very effective in stopping your attacker if you aim specifically on the head for the eyes, ears, and nose with the sharp ball-point tip. If you are squeamish with blood, then you can use the other end of your tactical pen effectively by striking the base of the neck, sternum, and ribs.

If you can’t reach those places, strike your attacker on the back of the hand near the knuckles. If you feel that you still can’t use the pen to reach these places, you can also use your body to protect yourself.

Lower body strikes are effective in dropping your attacker to the ground. You can strike the groin, knees, and thigh.

This is not the time to be nice and worry about your attacker’s feelings; your only thought should be, “I am going to make it home.” Be aggressive, strike early, and strike often.

Most attackers don’t expect their targets to fight back, prove them wrong, and strike right away. This will typically scare your attacker and they won’t think you’re worth the fight.

While your first blow may have stunned them, it will only take them a moment to get back up.

Your goal is to make it home, strike enough to where your attacker runs from you, or know they won’t want to pursue you any further.

Be careful not to drop your pen. Once you lose control of the pen, the fight will become much harder to win.

You have the upper hand with your tactical pen, so hold onto your pens as though your life depends on it.

If you are confined in a space, you can use the pen to break through glass. If you happen to be driving and find your car submerged in water, you can also use your pen to break the glass and escape your car.

If you can reach your pen and your hands are bound with duct tape or zip ties, your sharp ball-point tip can be used to cut through the restraints.

Tactical pens are a great writing tool that can write in all kinds of weather conditions. Freezing temperatures or desert heat can’t stop this pen from working.

Additionally, tactical pens also make for a very effective self-defense weapon. If you ever find yourself in a position needing a tactical pen, be sure to strike early and strike often. Stay safe.