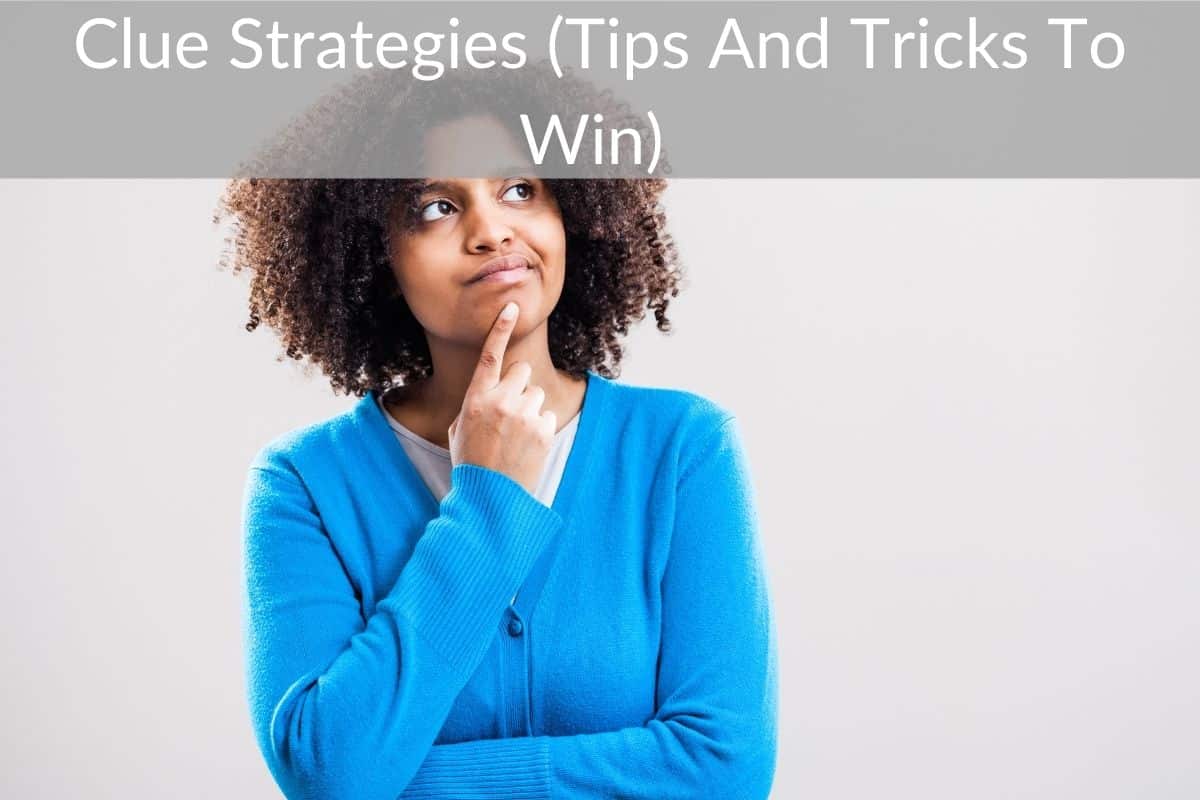 It’s Friday and that means Family Fun Night. You draw the game  out of the closet only to find it’s a board game that you have never really been a fan of…Clue. It seems like it takes forever (but not as long as Monopoly) and is kind of boring if it’s not your turn.

It also feels like forever before it’s your turn again. You want to have fun and make it a great time, but how?

Well obviously winning the game is a great way for it to be more fun for you… but if you rarely play this game you might be wanting some tips and tricks to help your Clue strategy along.

That’s what this article is all about!

Some important strategic tips for winning Clue are:

Of course those are just a few of the ways that you can gain an edge when you are playing Clue the next time. Paying close attention is a vitally important strategy that far too many people miss when playing Clue.

If someone repeatedly suggests a weapon, person, or room and people can’t seem to show cards for them then it might be that those are the correct cards. Of course you still have to verify that the person making the suggestion doesn’t hold one or two of the cards that they are suggesting.

Before we dive any deeper into the best strategies for playing Clue let’s take a look at some important info about the game.

One of the few board games that has been adapted on the big screen, Clue is a game designed to help bring out your inner Sherlock Holmes. You get to become the detective and deduce who is the criminal, what was their choice of weapon, and where was the crime committed.

The main objective of course is to find out your opponents’ cards and deduce the remaining cards left in the envelope before your opponents do.

Lastly, you have 9 rooms to go through and decide where the crime was committed: kitchen, ballroom, conservatory, billiard room, library, study, hall, lounge, or the dining room.

The suspects, weaponry, and rooms are all subject to change depending on the style of Clue you have purchased.

Now it is time to set up the game. You sort the cards into the three piles of suspects, weaponry, and rooms. Draw a card from each pile. Do not look at the drawn cards and place them into the envelope that has been provided. After the cards have been chosen, shuffle the three stacks together and deal the cards to the players until there are no more Clue cards left.

Grab your Clue game sheet and a pencil. Choose your character and roll to see who goes first.

Now that the object of the game has been deduced and the board is all set, let’s get into some more tips and tricks and strategize how you will win the next family fun Clue night.

Figure out your opponents’ cards

Since there are so many combinations of “whodunnit,” the objective is to find which cards the other players have. Once you have reached a room, you’re allowed to make a suggestion. During this time the player to the left of you shows you a card that you guessed if they have it in their hand. However, if they do not have one of the cards that you guessed, then it moves to the next player and so on.

If none of the players have any cards to disprove your suggestion, mark an X on your paper for the cards you don’t have in your hand.

Those people, weapons, or rooms are in the center envelope!

Mark your Clue sheet on every turn

Whether it is your turn or not, always mark your Clue sheet. You may not know the exact card that was shown, but after a while it will be easy to know who is showing what cards. For example if you have two of the cards in a suggestion and someone shows another card to a player then you know which card that player has.

Using this method allows you to eliminate cards even when it isn’t your turn.

Focus mainly on the rooms

Getting around the board takes time. Your main focus should be visiting as many rooms as possible until you can deduce in which room the crime has taken place. Another option is to go back and forth using the secret passages to try and discover who did it and with what weapon but that only works if you don’t keep getting shown that room card on every turn.

The reason it is important to travel around the board is that you are only allowed to guess whichever room you are in.

For instance, if you are in the kitchen, your guess must include the kitchen. There are some advantages to being guessed often as the suspect as well; you get moved around the board rather quickly allowing you access to more rooms.

The secret passages are there to help you. If you have narrowed it down to just a few rooms, don’t give it away by spending your time rolling and travelling all over the board just to reach specific rooms. Take that extra step and guess in a room you may already know the answer to, this also helps to throw off your opponents as well.

Visit rooms you have

Visiting the rooms that you have allows you to determine the suspect and weapon much faster. If you already know the room, you are “forcing” your opponents to show you either a suspect or weapon.

As a plus, you could even try figuring out just one item at a time. For example: you have Miss Scarlet and the Library. You are in the Library and guess Miss Scarlet, Revolver, and Library. If no one shows you a card, you now know the weapon is the revolver. However, all your opponents are thrown and believe they are so close to winning; when in reality, you’re holding (almost) all the cards.

Remember which cards you have shown

Be very hesitant to show weapons and suspects unless you absolutely have to.

Ideally you will only show the same cards to all of your opponents and try to keep a card or two under wraps as long as possible (without cheating). This will make the other players take longer to figure out something which gives you a better chance to win.

Unless they have also read this, they most likely won’t be employing the same types of sleuthing that you are. If someone is repeatedly making the same suggestion of suspect, weaponry, or always visiting the same room, it could mean one of two things.

They are either holding those cards and trying to throw everyone else off, or they have yet to see those cards and believe them to be the correct suspect, weaponry, and room.

Of course you have to try and figure out which of those that it is.

To see some of the different Clue editions that are currently available just click here.

How Do I Mark My Clue Sheet?

Now that you understand the concept of Clue, you are ready to be the master sleuther of game night. But how exactly do you put all these tips and trips to work for you?

Make sure to always use a pencil on your Clue sheet as many suggestions will be made and your guesses may change throughout the game.

An eraser will be your best friend throughout this game as what you thought was the correct suspect, weapon, or room at the beginning will be constantly changing.

Mark off your Clue cards first

You can either place x’s in the spaces or cross off the suspect, weaponry, and room all together. The choice is up to you how to cross off your own cards, but just make sure they are marked off in one way or another.

It’s easiest to just assign the spaces in the same order as seated around the board, but ultimately the decision is yours, and you will want to mark everyone that is easiest for you to remember.

Mark something every turn

Every time a suggestion is made, you should be writing something. For example: there are four players, players C, L, U, E. You are player E and it’s player C’s turn. You may not have to show a card because odds are, player L and U will have something to show. However, you can try and deduce what players L, and U have and here’s how.

Now it’s finally your turn and you now accuse Mr. Green with the rope in the study. Player C shows you Mr. Green. Looking back at your score card, you can now also deduce that Player U has the rope and you just eliminated not only a suspect, but also a weapon.

This is also where the eraser comes in handy. You can erase the one and now make it an x. The more x’s you make, the faster you can sleuth and become the winner.

You will be sure to be a super sleuth at the next family fun night using these tips, tricks, and strategies to win…as long as they didn’t read this as well.