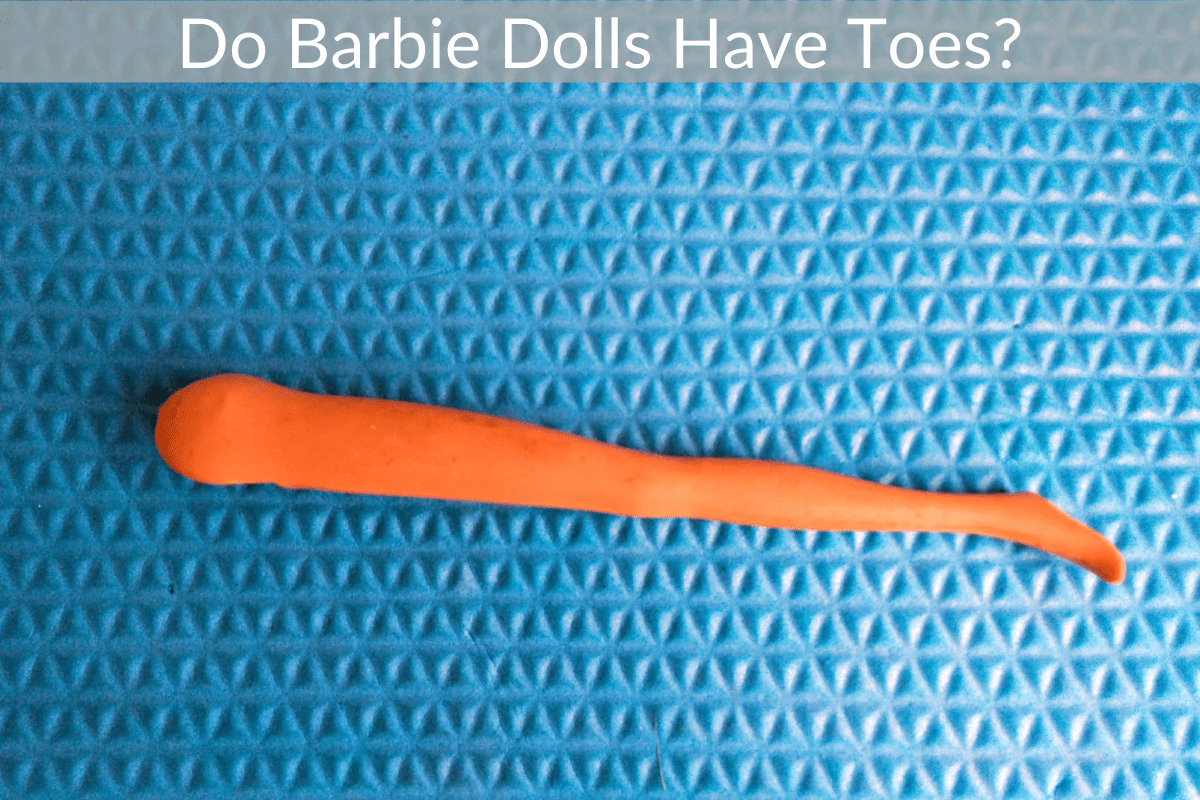 If you grew up in the USA a time in the last fifty years then chances are you grew up owning a Barbie doll or having a sibling that did at some point. This is a great toy for children to play with so that they can express themselves and release their inner creativity.

Since Barbies have been around for so long many people think they will know everything about them, but do you know if they have toes?

Many arguments have been made that they do or don’t have them and if you aren’t near your Barbies (or have gotten rid of them) you will want to read this article to learn about the Barbie doll and her toes.

Although no Barbies have ever had toes that were separate from the foot some newer models have indents on the feet to indicate where her toes start. Most of the Barbies that have been produced though just have one solid piece of plastic representing her feet.

The confusion likely comes because some people are remembering how their Barbies used to be (one solid piece of plastic for the feet) while others might be looking at modern Barbies (having indents that represent her toes).

Since Barbie having “toes” changed over time many people will remember correctly about their Barbies and still get into an argument about it!

Because of the way that Barbie’s toes have changed two people could be arguing about whether she has toes or not and both could actually be right!

Of course one thing is true no matter how old the Barbie is and that’s that the Barbie’s toes aren’t separated from the foot and can’t be moved around at all.

To see the most popular Barbies currently on the market just click here.

Do Barbie Dolls Have Toes?

Funnily enough, not many people notice whether or not Barbie dolls actually have real toes (they do not). Barbie dolls lack any form of posable toes and their feet tend to be just one uniform sloped piece of plastic on virtually all Barbie dolls made over the years.

Some Barbie dolls, particularly the more modern iterations of the beloved doll, do have small indentations to indicate where a toe might be present if the doll were a real person, but these small details are simply etched into the foot of the doll and are not a separate part.

Older Barbie dolls sometimes had painted toenails on their feet. This was a bit awkward considering that the Barbie doll itself did not have any individual toes present, but it did help to give the impression that the doll was just a bit closer to real life.

For a while, during the early 2000s, many Barbie dolls had almost entirely smooth feet. This may have been due to a change in the molds of the Barbie dolls and it was entirely unintentional or simply that Mattel was trying out something new with the dolls.

This change has since been reverted and dolls once again have indentions for where their toes would normally be.

Do Barbie Dolls Have Fingers?

Since we are on the topic of appendages that the Barbie doll may or may not have, you may be wondering whether or not Barbies have fingers. For the most part, Barbie dolls do have defined fingers.

The fingers of a Barbie doll are much more defined than their toes, and you can make out each individual finger very clearly. In fact, lots of modern Barbie dolls have special poses made just for their hands.

Their fingers can make all kinds of shapes and different signs, and this introduces a whole layer of fun to the play experience. It also helps if you want to pose your Barbie in a certain way.

Unlike the toes of a Barbie, Barbie hands have had defined fingers ever since the doll was introduced. While toes of a Barbie are a bit harder to pull off and the feet of the doll are usually hidden within a pair of shoes and hidden from the eye, the hands of Barbie dolls are always front and center and serve to give the doll a very unique aesthetic and attitude.

From a peace sign to a simple fashionable flick of the wrist, the fingers on a Barbie doll serve to give the doll more personality and make her all the more unique.

For the longest time, Barbie dolls had very recognizable and signature curved feet. Their feet were made to fit into heels, and nearly every doll produced had heels in one form or another. Whether it be pumps, stilettos, or some other form of tall footwear every Barbie doll had a foot that was curved upwards.

In recent years, Mattel has released a line of Barbie dolls that features totally different feet. These Barbie dolls, known as Fashionista Barbies, come with ankles that can be adjusted so that the doll can wear flat shoes or some classic heels.

One thing to note is that Mattel still has not changed the molds for the feet to add toes, so these new Barbie dolls are still lacking toes just like all of the Barbies that have come before. It seems that even if Barbie dolls see changes in their feet design and other aspects of their bodies, they will never see a day when they get toes.

It may be for the better, as getting fully defined toes that go along with the hands of the doll will most likely increase the price and serve to make the production of the dolls that much more time consuming and difficult, and the playability that comes out of it may not be worth the extra materials and time it takes to produce such a feature.

Some Other Features You May Have Missed

Barbie dolls have had multiple iterations of their legs. If you have owned Barbies through the years you may have noticed that their knees have seen quite a few changes.

Barbie dolls have featured legs with bendable knee joints, those with a sort of “clicking” knee joint, and legs that cannot be bent at the knee at all. Many fans of the dolls seemed to have really enjoyed the classic bendable knees that the dolls featured, and are sad that they no longer have such a feature.

There are some Barbies that are still being manufactured with fully movable elbows, knees, wrist, and ankle joints, but these Barbies only feature a few of the Barbie body types and may not appeal to everyone.

The funny thing to note with these very posable Barbies is the fact that they feature even fewer foot features than other models! They have very smooth feet with almost no toe indentation at all, further distancing them from any sort of marking that could be considered a toe.

Barbie dolls are a great toy that packs tons of playability features into its package. One thing that the doll lacks, however, is toes.

It may seem a bit odd as the doll has been made to be quite lifelike in order to appeal to a wide audience and allow children to express themselves, yet Mattel has never decided to include defined toes on a Barbie doll.