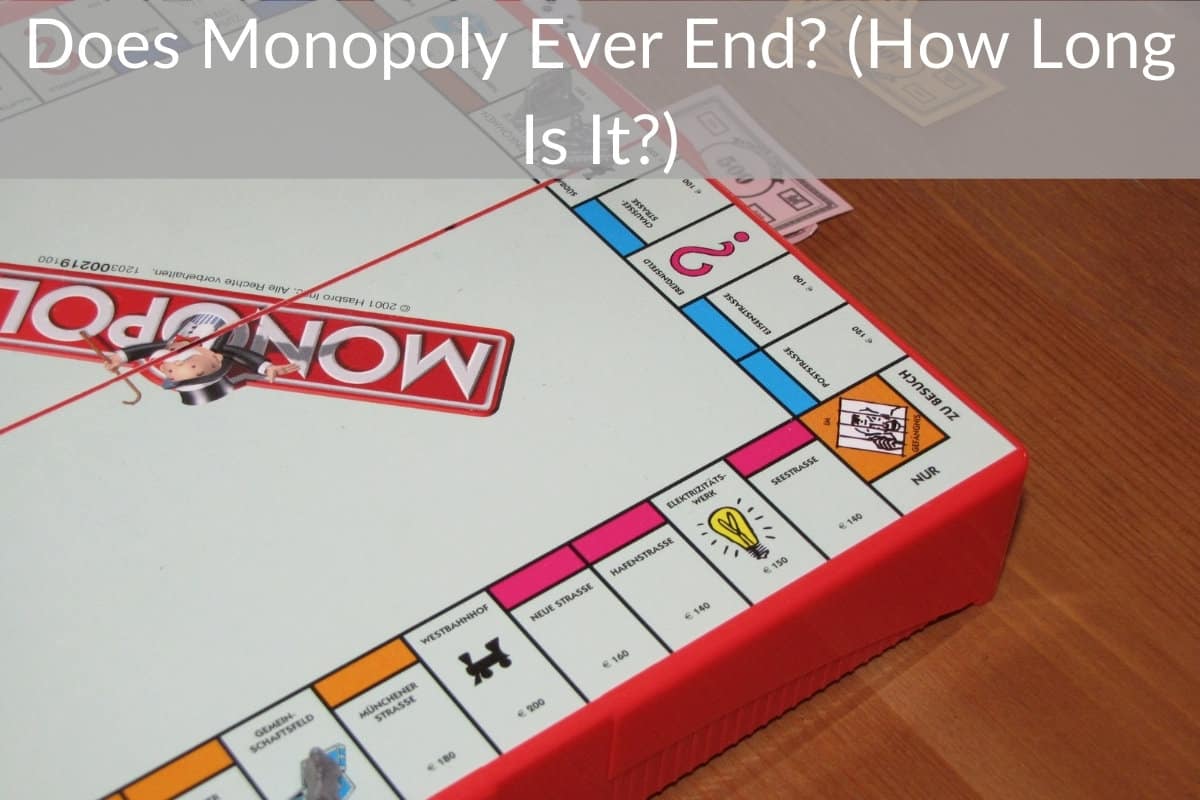 Monopoly, one of the most widely played board games in the world, is a game that you either love or hate.

Those that love the game enjoy the strategy, the chance, the fight for power of the board.

Those that hate the game are generally in one category… it takes way too long to play.

This crowd usually doesn’t want to devote an entire evening to one game that they already don’t enjoy, and refuse to understand why others could even begin to enjoy the complexity of this classic game.

One thing is for certain, though, Monopoly is going to demand a lot of your time if you decide to play a game.

The potential back and forth of funds and the race for properties might be exhilarating for the first portion of the game; however, many people get bogged down when they are constantly mortgaging properties every time they land on Park Place or Boardwalk.

Then, you have those that enjoy stretching a game out over multiple “gaming sessions.”

These players thrive in the late game. They are looking at how they can continue to bleed the funds from the other players over a long period of time.

They could play Monopoly for hours and never have their joy satisfied.

When it comes to Monopoly, the game really can seem to last forever.

Research has shown that one in eight games of Monopoly played between two players with no trading can result in a continuous game that never ends. The reason this could happen is that neither player ends up with a “monopoly” of any properties and the rent never gets to a point that it causes the players to struggle to pay each other.

Personally, I couldn’t imagine a game played in this manner, but if you want to win, not trading in a two player game could work if you are able to get a Monopoly on your own.

Other than this rare scenario, Monopoly will end when all but one player has gone bankrupt.

Most games of Monopoly will start slow, and toward the end of the game it will sort of avalanche funds into one player’s bank as people continue to land on their properties.

Monopoly is not a game that will take twenty minutes and it isn’t a game you should expect to play multiple times in a night.

You need to expect the game to be played for a while. If you want to try and play forever, there is a chance of that happening, too.

So enjoy it while it lasts, or see if you can put the forever game theory to the test.

To see all of the different Monopoly editions and spin-offs currently available you can click here.

How Long Is Monopoly Supposed to Last?

Monopoly is known for a few things: its popularity, its mascot (Rich Uncle Pennybags), frustration over losing, and really long games.

In today’s society, a lot of people feel that playing a game for hours on end is unacceptable.

With the access of information getting quicker and quicker, streaming services that are eliminating commercials, and mobile phone games that can be taken anywhere, board games have to combat the stigma that time is too valuable.

Due to this, a lot of potential customers are concerned with the length of time it will take to play a game of Monopoly. They hear about games their parents or friends have played lasting hours, and it prevents them from even checking out a game that has brought joy to millions for nearly a century.

So how long is a game of Monopoly supposed to take?

Most games of Monopoly are going to last one to two hours. Some could take as little as twenty minutes if one player gets lucky and all the others struggle from the start.

Whether your game falls into the under an hour category or pushes into the two or three hour time frame is impossible to judge before the first set of dice is rolled.

There really isn’t a way to know how long a game is going to last until it’s over, but if you are nearing the one-hour mark, you shouldn’t have too much longer left for an average game.

Board games all have a limited number of players that can play. This is usually set by the game designer and allows them to ensure proper game balance.

Some games allow for a range of players to play, while others require a specific number of participants.

Monopoly falls into the category of allowing for a range of players. In fact, different editions of Monopoly might even have a different number of maximum players.

Through the years, there have been a lot of special

editions of Monopoly, and some of those have added player tokens.

Monopoly can be enjoyed by as many players as the game supplies tokens for and it allows you to play with as few as two players.

Playing Monopoly with two players is often the longest form of the game, as both players will likely have a balanced portfolio that will have funds going back and forth throughout the game.

Whether your game is between the maximum or just you and one other person, you can be sure to have fun.

The game is well designed and balanced to allow for a great time either way.

How Does Monopoly End?

While some games of Monopoly will seemingly go on forever, the game does have a point where it ends. The end of the game could come as early as twenty minutes in at times, while it can also sometimes last multiple hours as well.

The official rules for Monopoly state that the game ends when all players, except one, have gone bankrupt. This means that they had to either pay a fine or rent that they could not provide the funds for.

Once only one player is left, they are able to claim victory.

This might seem harsh, but that is the point of the game. Your goal is to successfully develop properties that only one person can afford a trip around the board.

Hopefully, that will be you.

In reality though often the game ends a long time before all the players are out. Once one or two players are out the winner is almost certain so at that point often the other players will concede and then everyone will move on to a different game.

Sometimes of course the game ends when the board is flipped and people stomp off!

While some board game players enjoy long, drawn out games there is a large segment of the industry that prefers shorter games.

Monopoly has long been known as a game that takes hours to play. While this is usually the case, it shouldn’t deter you from playing it.

With an estimated number of players closing in on a billion, Monopoly can be fun for everyone.