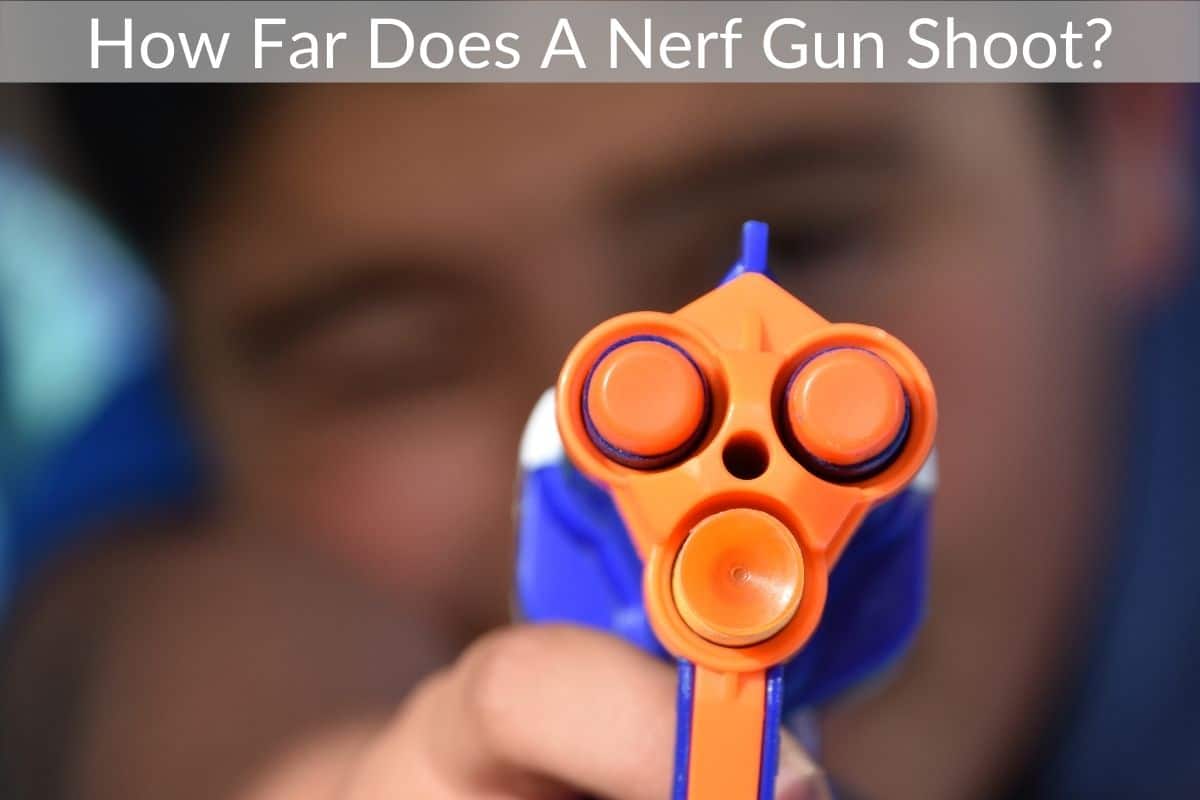 Firing distance for a Nerf gun can be important in the midst of a stealthy and intense Nerf battle. When that one friend pulls out his long barreled blaster and you look down at your puny Nerf pistol, it’s probably time for an upgrade.

Replacing your Nerf weapon with one that can shoot the farthest is not a bad idea.

On average the basic Nerf models fire about 10-20 feet. More powerful (and more expensive) Nerf guns have the ability to shoot over 100 feet. Depending on the type of Nerf gun you are looking at will depend on the distance that they can shoot.

Imagine if you will the scene of a Nerf battle.

You are hiding behind obstacles and poking your head up over them to see how you can gain some ground and get closer to your opponent to get a good shot at them.

But wait, this scenario isn’t the same if in your hand you grasp a Nerf gun that can shoot far enough and with enough accuracy to hit the other players without sacrificing your cover. You can stay right in your safe zone and fire away without fear that you have to move closer to get a better shot.

The basic (and cheaper) Nerf guns don’t shoot that far.

In fact, since they only fire about 10-20 feet, they could probably only be used in the event you want an extra few darts in case of emergency.

In this post I am going to list some of the Nerf guns that can get the distance you want on that foam dart so you can eliminate your opponents quickly and easily.

What Nerf Gun Has The Longest Range?

Let’s start with the longest range Nerf gun. Oh yes, the one that everyone wants as their sidekick during a get together with other Nerfers.

The one that will gain you the victory with shots from far away.

While the Nerf N-Strike Elite Centurion can fire from 100 feet, the Nerf Ultra One Blaster can fire darts a whopping 120 feet making it the longest shooting Nerf gun.

Nerf elite darts are also helpful when you want greater range of fire. These “advanced” darts are twice as big as the regular Nerf ammo and are made to shoot farther. They are said to not be too accurate at those distances though since they are still just a foam dart.

But along with a great gun you can be unstoppable. So if you want your ammo to reach its intended target faster and at a greater distance try out the Nerf elite darts.

The Nerf Ultra One Blaster is considered the Nerf gun with the longest range and with its distance of 120 feet it is certainly at the top of the charts. This white and orange blaster has a drum holding 25 darts for easy reloading and a cool design.

Red and orange stands out on the Nerf N-Strike Elite Centurion along with its clip and barrel extension. You can’t go wrong when you are firing 100 feet away and rockin’ it with this awesome blaster.

If you aren’t into either of these then there are still quite a few other blasters to choose from including:

What Is The Best Nerf Gun For Sniping?

You can hide far away, fire those darts and know that it will reach its designated target.

There are many Nerf guns that are good for sniping but the Nerf Centurion Mega Toy Blaster seems to always come out on top. As mentioned earlier about this blaster it can shoot up to 100 feet.

Out of all the blasters, some of the best sniper Nerf guns include:

All of these blasters are perfect for sniping during a Nerf war. They even have great accuracy.

If you’re looking to shoot from a longer range, the Centurion is considered one of the best sniper rifles. This blaster had a recoil effect not requiring you to manually pull back the bolt before you reload it.

Though discontinued now, it still can be found online on Amazon, Ebay, etc. It is entirely up to you which blaster is the best fit.

They all have their unique features that make them great on the Nerf battlefield.

What Is The Hardest Shooting Nerf Gun?

Lastly I want to mention a couple blasters that not only shoot far but hard as well. Keeping in mind that Nerf guns don’t hurt when hit with them, some can fire at great speed making them hit harder than basic Nerf darts would.

Nerf N-Strike Elite HyperFire blaster can fire five darts per second with the press of its acceleration button. Said to be one of the fastest firing Nerf guns, just a pull of the trigger can jump it into action as it rapid-fires for lots of Nerf awesomeness.

The Rhino-Fire blaster is a motorized rapid double barrel blaster that can rapid fire with a range of up to 90 feet! So if you want the fastest firing gun on the course this is an excellent choice.

We mentioned this awesome blaster earlier saying it was one of the longest range Nerf guns and would like to add in that it is also one of the fastest shooting.

Looking for that perfect blend of long distance range and hardest hitting? This blaster is definitely for you!

Nerf wars are incredibly fun and when you have the perfect weapon you will feel unbeatable and ready to conquer. Most Nerf guns can’t fire past 10-20 feet but some of the newer and more powerful ones can get up to an amazing 100 and even 120 feet.

So you can watch in splendor as you spray your opponents with foam darts from afar.