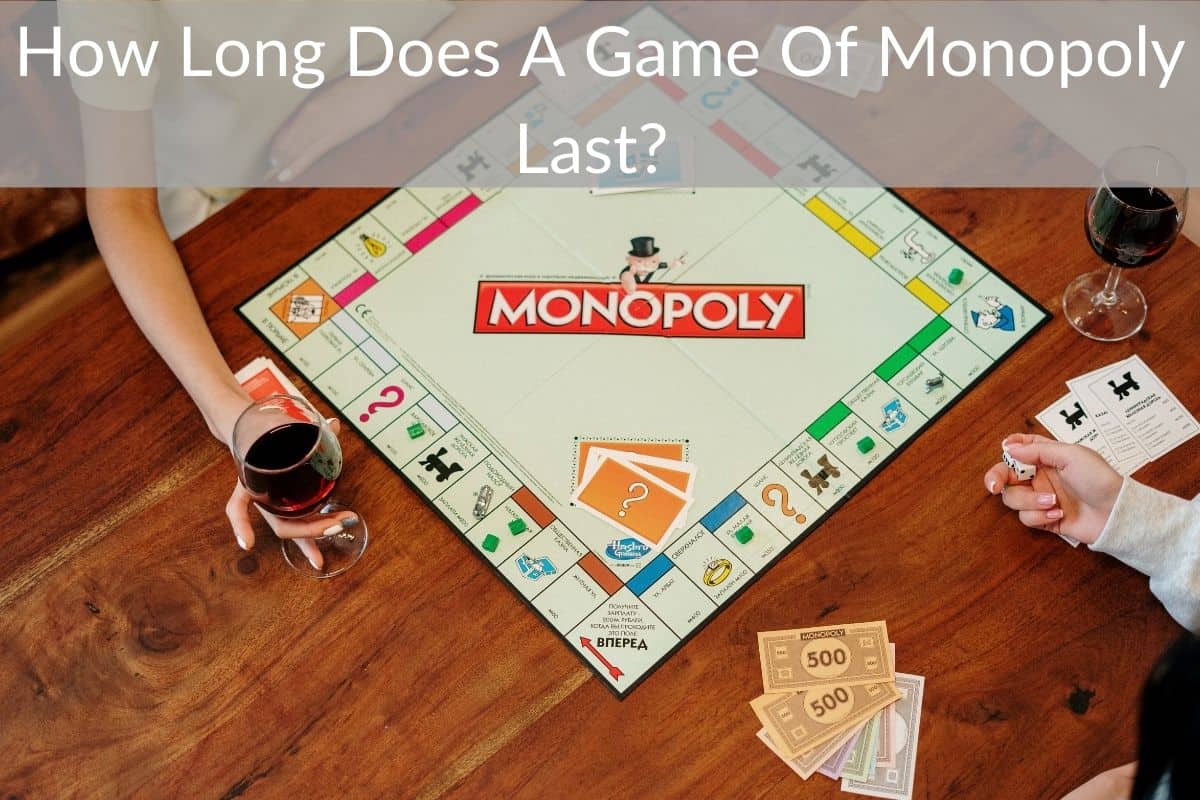 It’s game night and you’ve pulled out all your favorite board/card games to choose from. Did Monopoly make the list?

In most cases, probably not.

Monopoly is that game you only want to play when you know you have a good chunk of time to dedicate to it. If you were thinking of a quick-paced game night, Monopoly doesn’t quite check that box either.

Maybe you did pull out Monopoly for game night and someone does choose Monopoly, just how long will you all be sitting around the table playing?

According to the classic Monopoly box, a game of Monopoly should last 60-90 minutes. However, how long a game lasts will depend on luck and how good the players are at trading with each other.

In the rules there are three different options for game play. The regular version which does not have a time limit on it, the short 60-90 minute version, and another version where a time limit is set.

There has been speculation that one of the reasons Monopoly feels like a never ending game is due to most people having not read the rules.

This is a classic game that has been passed down from generation to generation and each household creates its own rules, and these rules are passed down. One rule that is believed to make the game faster is that when a player lands on a property and either doesn’t have enough money or chooses not to purchase the property, the property is left untouched and it’s the next person’s turn.

However, the rules say that this property is put up for auction by the bank, and the highest bidder becomes the property owner.

This not only speeds up the purchasing process, but it also allows for some strategy in owning all the same colored properties to place houses and hotels on much faster and collecting that high rent.

How Can You Make Monopoly Shorter?

If you can not stand spending hours playing Monopoly there are a few things that you can do to make the game a bit shorter.

One of the easiest things to do to speed up the game is to roll the dice for properties rather than making everyone go around the board. You can have the lowest or highest dice roll win a property and then the game begins once all the properties have been given out.

Although this doesn’t stay true to the rules it will speed up the game quite a bit.

Another option to speed up the game is to mix the properties up and then blindly draw/give them out around the board.

Again this will speed up the game significantly as people can start trading or building houses/hotels immediately.

Hasbro has also included a set of rules for Monopoly that says it should take only 60-90 minutes. Compared to the never ending minutes it feels sometimes that Monopoly takes, this might be a great alternative.

How Does A Game Of Monopoly End?

Typically when one thinks of ending a game of Monopoly, it usually ends because someone is too tired to keep going, a sore loser is declaring that someone has cheated, or someone has “accidentally” knocked the board over creating a mess of everyone else’s property, pieces, and cash.

However, there is an actual end to Monopoly. It may take a while to reach the ending point, but it does exist.

However, there are some rules that say the game is over when two players have gone bankrupt, and the winner is the one with the most property and assets.

Whichever set of rules you decide to follow, the winner is only declared after a minimum of two (unless you are only playing with two players) players have declared bankruptcy.

Can Monopoly End In A Tie?

You feel that you are getting so close to ending Monopoly. You have seized some assets and put other players in bankruptcy; soon you think you will be declared the winner.

However, your opponent is seeming more like your equal as you both have a good amount of property, hotels, and cash. Is it possible that this game could end in a tie?

Can you and your opponent really end with the same value in properties and cash?

According to the official rules, Monopoly cannot end in a tie. You would just keep rolling and making your way around the board until one of you declares bankruptcy.

It may feel like the game will never end before there is a clear winner, but it is also highly unlikely that all the assets and cash would come out to equal the same amount for a tie.

Can You Cheat In Monopoly?

In the game of Monopoly the whole goal is to take down your opponents by forcing them to declare bankruptcy.

While it may be difficult to cheat in Monopoly, it doesn’t mean that it is impossible. If you are the banker in Monopoly, it can be extremely easy and very tempting to steal from the bank and add some cash to your stockpile or even overpay an ally you’ve created before the game starts.

Cheating is not allowed in Monopoly unless you are playing the Cheaters Edition of the game. There are no official rules for what happens to cheaters in Monopoly, but that doesn’t mean that you should cheat.

If you feel that cheating might make playing Monopoly a bit more exhilarating, there is a Monopoly Cheaters Edition. This comes complete with (plastic) handcuffs to detain the cheater when caught.

While it may be sneaky and easy to cheat, there are still rules by which you need to cheat. There are cheat cards with exactly what kind of cheating is allowed and rewarded.

If you cheat outside the cheat cards it just makes the game less fun.

Even though Monopoly may have a bad rap for lasting forever, there are rules to help make the game go a bit faster.

Whether you decide to enjoy the 60-90 minute game, until two are declared bankrupt, or when there’s only one man standing, the game is still a classic and can be fun for all.