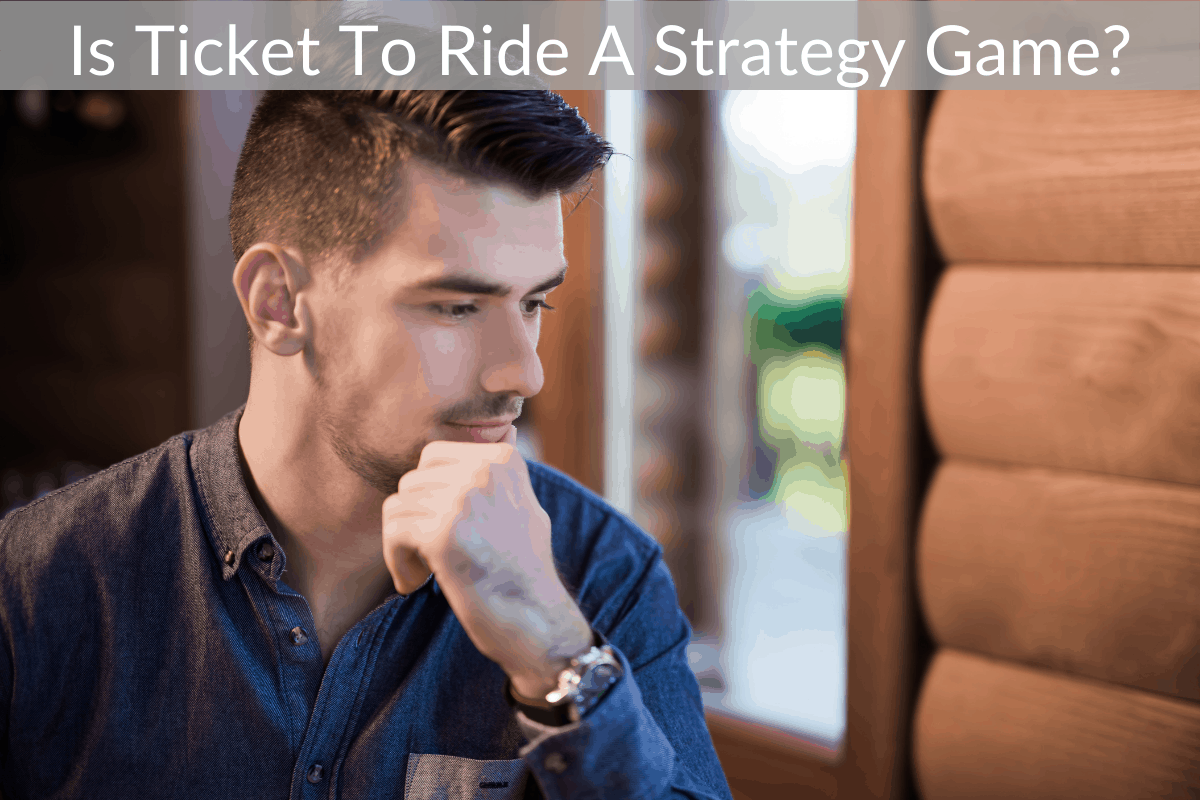 The game Ticket To Ride ia German-style Railway game. Since the game does not contain dice and players can choose their own cards it is certainly more of a stretchy game than many others although there are some aspects of the game that are just pure luck (such as which destination cards you start the game with or draw).

Ticket To Ride is absolutely a strategy game and as you play it more times you will start to figure out which strategy you prefer to use. Some people will want to draw until they have a giant stack of train cards and then begin playing while others will try and grab their most important train routes first.

Although there is a lot of strategy involved if you want to win, there is not one strategy available to ensure that a player will win as there is some luck in regards to the cards that you draw and where other people play their trains at (thereby blocking your route).

The strategy that I personally use when playing this game is to quickly get my trains on the shorter routes (one or two trains) so that way no one else can block me on those easier ones. I will then spend a decent period of time just drawing train cards to try and get the ones needed for the longer routes.

Since the goal is to have the most points at the end of the game sometimes abandoning a destination that doesn’t fit in with the rest of your strategy is the best option. You will lose those points but you can easily get more by finishing multiple destinations on the other side of the board.

Some people also use the strategy to draw multiple destinations their first few turns of the game trying to get destination cards that are near each other. This can work out quite well if you are lucky enough to get the right cards but if you are unlucky then it can quickly backfire.

Ticket to ride is a great family game that normally requires 45-90 minutes to play from start to finish (depending on the ages of the players and whether everyone has played before) so it won’t last forever (thankfully). Although the game says that ages 8+ can play, in my experience it’s better to have the players be a bit older as they will be able to grasp the strategy of the game a little bit better.

To see all of the different Ticket To Ride games that are currently available you can click here.

How is Ticket To Ride Set Up for Play?

Once the game is set up, each individual is given 4 train cards (used to complete the routes) and 3 Ticket To Ride  destination cards. The destination cards will have a pair of cities throughout the US and the Southern part of Canada (for the original game) on the card.

These destination cards will be everyone’s goal as you gain points by completing them while also losing points if you don’t. The two cities on the destination cards are what everyone is trying to connect but without the other opponents knowing. Sometimes you will get two destination cards in one section of the country while the third card is at the opposite side of the board. In that case it’s often better to simply abandon that destination and just take the loss of points for it.

When the individual receives the 3 destination cards upon setting up the game, they must keep two of these cards but can get rid of the third one by placing on the bottom of the pile or keep all three if they wish to.

The two (or three) destination cards that the player chose to keep, the rules state that these cards must be kept for the remainder of the game and not returned to the pile.

How To Play Ticket To Ride

During every individual’s turn, there are 3 options that are available for gameplay.

The first option is for the person whose turn it is to choose two train cars either from the face up cards or from the deck.. If that person picks a locomotive card (a wild) that is face up they may not pick another card however, if they draw the locomotive cars from the stack they still get an additional card.

The second option is the individual can choose to take 3 destination cards but must only keep one of the cards chosen. This will allow the player to try and find destinations that are in similar spots on the board allowing them to complete more destinations cards and get more points.

The third option that someone can do on their turn is the person can choose to play their  train cards that they have in their hand to place their trains on a specific route. If the individual chooses to claim a route, they must place the train pieces for that route on the board and discard the train cards.

All the train routes have different lengths and can only be played by one person. Some of the two cities have rail lines that run parallel to each other but each one can only be claimed by a different opponent, but only if there are more than 3 people playing.

The same person may not claim dual parallel routes that are headed to the same two cities as the parallel routes are designed to allow more than one player to reach those cities.

If there are less than 3 players then only one of these parallel routes can be claimed by a single player instead of using both of the routes.

On each individual’s turn, the player can claim any of the routes if it has not already been claimed and if they have enough train cards to do so. Even if claiming a route does not help the player complete their destination cards they can still claim it due to the strategic benefits such as blocking other players or attempting to.

The game ends when one individual has two or less of their corresponding train pieces left. At this point each opponent gets one last turn.

A bonus of ten extra points is given to the individual who has the longest continuous  train that runs across the board. Whomever has the most points at the end of the game is the winner.

How Many Versions Of Ticket To Ride Are There?

There are many different versions of this game and Days Of Wonder (the owner of the game) are constantly making additional ones. The board game portion has expansion packs, anniversary editions and even specific cities or countries as well. The New York edition uses taxis, the London edition uses buses and the Amsterdam edition uses horse drawn carts.

As of right now there are currently 25 different Ticket To Ride versions on the market. That is likely to keep increasing in the future just simply because of the popularity of the game!

The gameplay is still the same on all of these different versions with a few added rules and exceptions for each version. There are nine map collections that add new rules that are specific to that map to twist things up a bit.

There was even a 2020 stay-at-home board map expansion that was released during the Covid-19 pandemic. In this version family members can control the other family members as they complete daily tasks.

There is also a Ticket To Ride card game that supports 2-4 players and game play lasts between 30-45 minutes in a simpler form. Recently the Ticket To Ride franchise game has entered the digital era through PC, online, Xbox, iPad, iPhone and even Alexa.

Ticket To Ridw was produced and released to the public by a company called Days of Wonder. There are 20 different languages the Ticket To Ride game is available in as well as on digital platforms.

Ticket To Ride is a family game that has a broad range of strategies that can be used to help you win! Luck of the draw is also a factor in winning this game but much less than in other games and even in other strategy games.