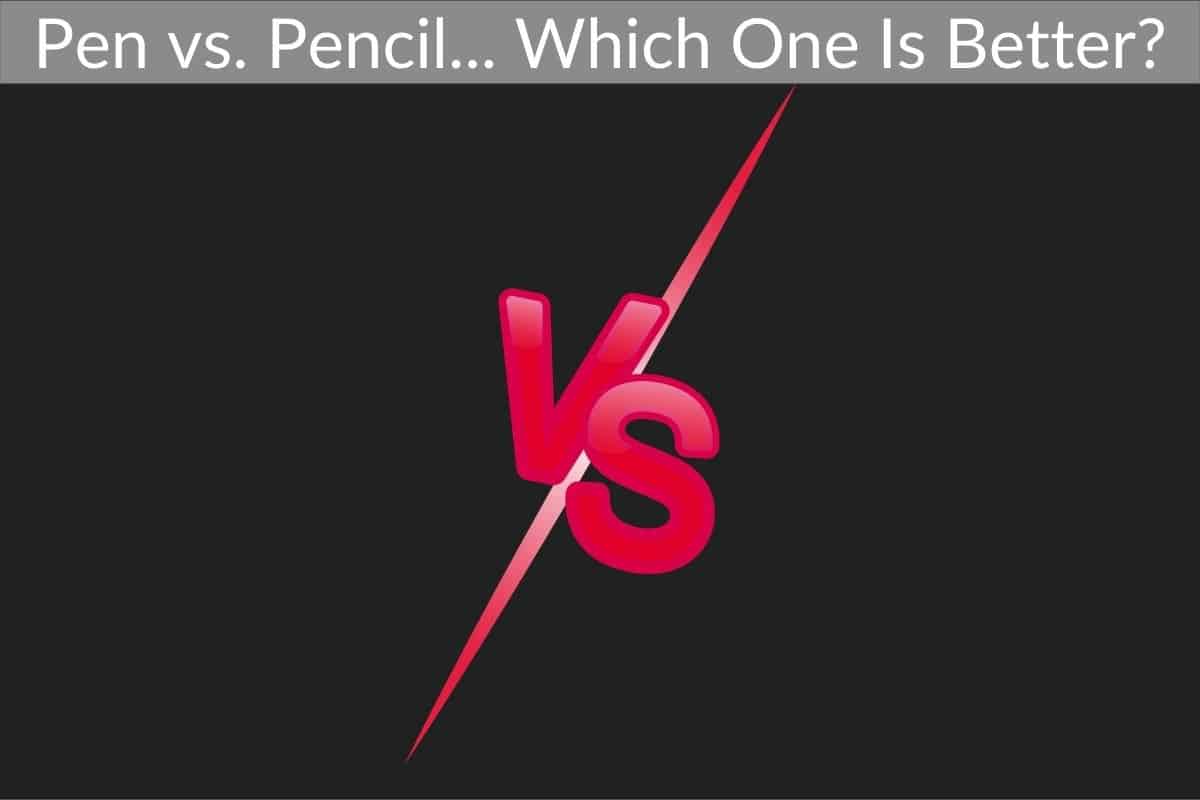 Both pens and pencils are used for different things and have different objectives. If I need to write a check I will use a pen. If my kids are doing homework I want them to use a pencil.

But which one is better?

Pens and pencils are different and are used for different things. The majority of people will use pens more often than pencils so you could say that pens are better.

However choosing one over the other for being “better” is really just an opinion and really depends on what you need to do.

If you need to draw a line in the sand over this issue, use a stick. But you may fall on either side of this issue depending on how you intend to use your writing or drawing instrument.

Everyone has a favorite when it comes to pens or pencils. However it is often the task at hand that will decide whether you will want to use a pen or a pencil.

Some research has found that pencils are more environmentally friendly than pens. And, anyone who loves pens and defends their superiority as writing implements also likely uses pencils.

Even users of luxury writing pens will reach for pencils when the task calls for them. Those who deride pencils may be stuck on the old-fashioned yellow number 2’s, and may never have experienced the ease, tidiness and convenience of a fine mechanical pencil.

These gems never need sharpening, and as a result never leave messy shavings behind. Instead, they serve as refillable vessels for graphite sticks of varying widths. When the tip becomes worn, you simply shake the pencil, twist it or push a button to extend the graphite stick, and continue using it until it is fully depleted.

Then, you simply refill the pencil and carry on.

Like pens, mechanical pencils are made in elegant colors and styles, made with materials designed to ease writing, drawing and sketching while minimizing tiring. This makes for neater writing and more consistent lines.

Important papers are signed in ink, and the person signing an important document must take a moment to compose themselves and think about the importance of their actions and the instrument they plan to use.

Perhaps no better example of the power of the pen is the size and style of John Hancock’s signature on the Declaration of Independence.

A fine fountain or rollerball pen, guided by a knowledgeable, practiced hand, glides across the page effortlessly. It expresses the writer’s individuality.

As with different graphite stick thicknesses, varying the nibs on a fountain pen allows for a broader range of calligraphic creativity. The width and appearance, or “font” and size of handwriting can vary depending on the nib selected for a pen, or the graphite stick enclosed in a mechanical pencil.

A fine set of colored pencils is incredibly versatile for art and self-expression. A box of these beautiful pencils provides variation in colors immediately.

A fountain pen requires a change of ink to alter color, which takes a bit more time, but is worth it to give to your thoughts and bring color to your sketches.

Both elegant fountain pens and stylish mechanical pens require users to slow down and attend to the instrument as well as to the writing. The care and use of a fine pen or pencil encourages refinement and thoughtful practice.

Ultimately, the question of whether pens or pencils are the superior writing instrument creates good discussion, but it’s entirely possible to write just using chalk or a quill feather.

Choosing a writing instrument is really a matter of personal taste.

To see the most popular pens and pencils just click here.

Pens Vs. Pencils: What Are The Differences?

A pen is a common writing instrument that applies ink to a surface, usually paper, for writing and or drawing. Early pens such as reed pens, quill pens, dip pens and ruling pens held a small amount of ink on a nib or in a small void or cavity which had to be periodically recharged by dipping the tip of the pen into an inkwell.

Today, such pens find only a small number of specialized uses, such as in illustration and calligraphy.

Reed pens, quill pens and dip pens, which were used for writing, have been replaced by ballpoint pens, rollerball pens, fountain pens and felt or even ceramic tip pens.

Ruling pens, which were used for technical drawing and cartography, have been replaced by technical pens.. All of these modern pens contain internal ink reservoirs, such that they do not need to be dipped in ink while writing.

A pencil is a writing or drawing implement with a solid pigment core encased in a sleeve, barrel, or shaft that prevents breaking the core or marking a user’s hand.

Pencils create marks by physical abrasion on a surface, leaving a trail of solid core material that adheres to a sheet of paper or other surface.

They are distinct from pens, which dispense liquid or gel ink onto the marked surface.

Most pencil cores are made of graphite powder mixed with a clay binder. Graphite pencils (traditionally known as “lead pencils”) produce grey or black marks that are easily erased, but otherwise are resistant to moisture, most chemicals, ultraviolet light and natural aging.

Around 1560, an Italian couple named Simonio and Lyndiana Bernacotti made what are likely the first blueprints for the modern, wood-encased carpentry pencil. Their version was a flat, oval, more compact type of pencil. Their concept involved the hollowing out of a stick of juniper wood.

Shortly thereafter, a superior technique was discovered: two wooden halves were carved, a graphite stick inserted, and the halves then glued together, essentially the same method in use to this day.

Other types of pencil cores, such as those made out of charcoal, are mainly used for drawing and sketching.

Colored pencils are sometimes used by teachers or editors to correct submitted texts, but are typically regarded as art supplies, especially those with cores made from wax-based binders that tend to smear when erasers are applied to them.

Grease pencils have a softer, oily core that can leave marks on smooth surfaces such as glass or porcelain.

The most common pencil casing is thin wood, usually hexagonal in shape but sometimes cylindrical or triangular, permanently bonded to the core. Casings may be of other materials, such as plastic or paper.

To use the pencil, the casing must be carved or peeled off to expose the working end of the core as a sharp point. Mechanical pencils have more elaborate casings which are not bonded to the core; instead, they support separate, mobile pigment cores that can be extended or retracted (usually through the casing’s tip) as needed.

These casings can be reloaded with new cores (usually graphite) as the previous ones are exhausted.