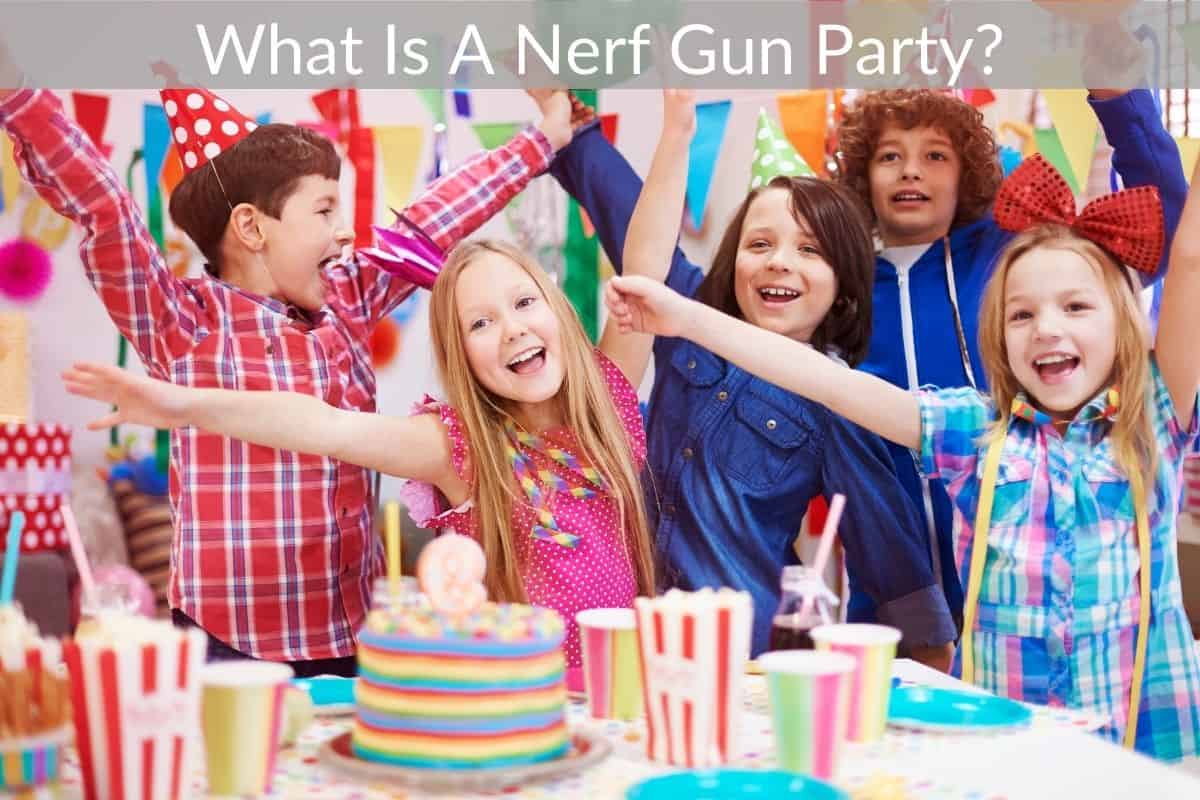 Are you celebrating a birthday soon? Maybe you’re just having a get-together with friends and wondering what exactly to do.Well, if you love playing with Nerf guns and if you enjoy a good Nerf war, why not have a Nerf battle?

Oh, and make it a party! (Hint hint parents, little kids (especially boys) would go crazy for this idea.)

A Nerf gun party is a party with, you guessed it, Nerf guns! There are many games you can play with Nerf guns and Nerf is such a fun idea for a party theme as well.

Don’t fret if you don’t own a Nerf gun yet. They are easy to pick up at Walmart, Target, Amazon, etc. and if it’s a birthday party, what better present to give than a Nerf gun!

Having a Nerf gun party sounds like a blast for children and I’m pretty sure the adults will want to get involved too. It’s one of those games that you never grow too old for.

No matter your age you can still have a grand time shooting foam darts at your opponent or running from theirs.

How Does A Nerf War Work?

Darts flying about and laughter filling the air. Nerf gun parties are so exciting and a great way to spend some time with friends or relatives.

A Nerf war is a safe and enjoyable way to have a dart (foam darts of course) “battle” with friends. It can operate in a variety of ways by simply shooting at each other, having obstacle courses, having target practice and much much more.

Some games you can play are familiar and some you can just make up!

It’s not complicated to have a Nerf war but there are some basic guidelines on how to play. Keeping in mind you can choose exactly how to play the game.

This is how to play the most common Nerf war:

There are also some common rules that are applied to help the game run smoothly:

How Do You Get Good At Nerf Wars?

If you are about to play in an epic Nerf battle you are probably curious how to be the best player out there.

Playing smart and making a strategy ahead of time  is key to being good at Nerf wars.

Here are some tips to making you an awesome Nerf master:

By following these simple tips you will be well on your way to dominating the Nerd gun course. For more detailed strategies you can visit Blaster Piece.

What Games Can You Play With Nerf Guns?

Games provide such wonderful entertainment whether they are indoors or outdoors. With a Nerf gun game you can play them in either location.

The beauty of Nerf games is that you can play whatever game you want. You can make them up or play originals. Nerf games can be altered for whatever group you are playing with.

There isn’t a set list of games you have to play with Nerf guns but here are some of the most popular ones:

Of course there are tons of additional games that you can play with your Nerf guns such as setting up an obstacle course, jousting (running at each other while trying to shoot each other), king of the hill, and much more.

You can adapt virtually every childhood game into a game that can be played with Nerf guns!

Nerf gun party – just like a normal party, but centered around the main event- a Nerf war!

I would recommend finding Nerf party ideas such as decor, etc. online or on Pinterest. The party can be indoors, outdoors or wherever you desire.

Did you know that there is such a thing as a Nerf Arena? A place where you can enjoy having a nerf war with your buddies or hosting a nerf party for your child. They even include the ammunition and blasters!

Two of these awesome attractions include the Nerf BattleZone in Denver, Colorado and Fort Wayne Indiana.

An excellent present to accompany this event would be a-wait for it- Nerf gun!

The birthday child will certainly love this gift and if you are really going all out, consider buying/making a Nerf cake. So yummy and so cute!

Ideas for a Nerf cake can be found here.

If you love playing with Nerf guns (or you have a child that does) then a Nerf party is perfect for you. So, let’s get out there and have some fun!

Enjoy the Nerf battle with friends! It’ll be a party worth remembering.