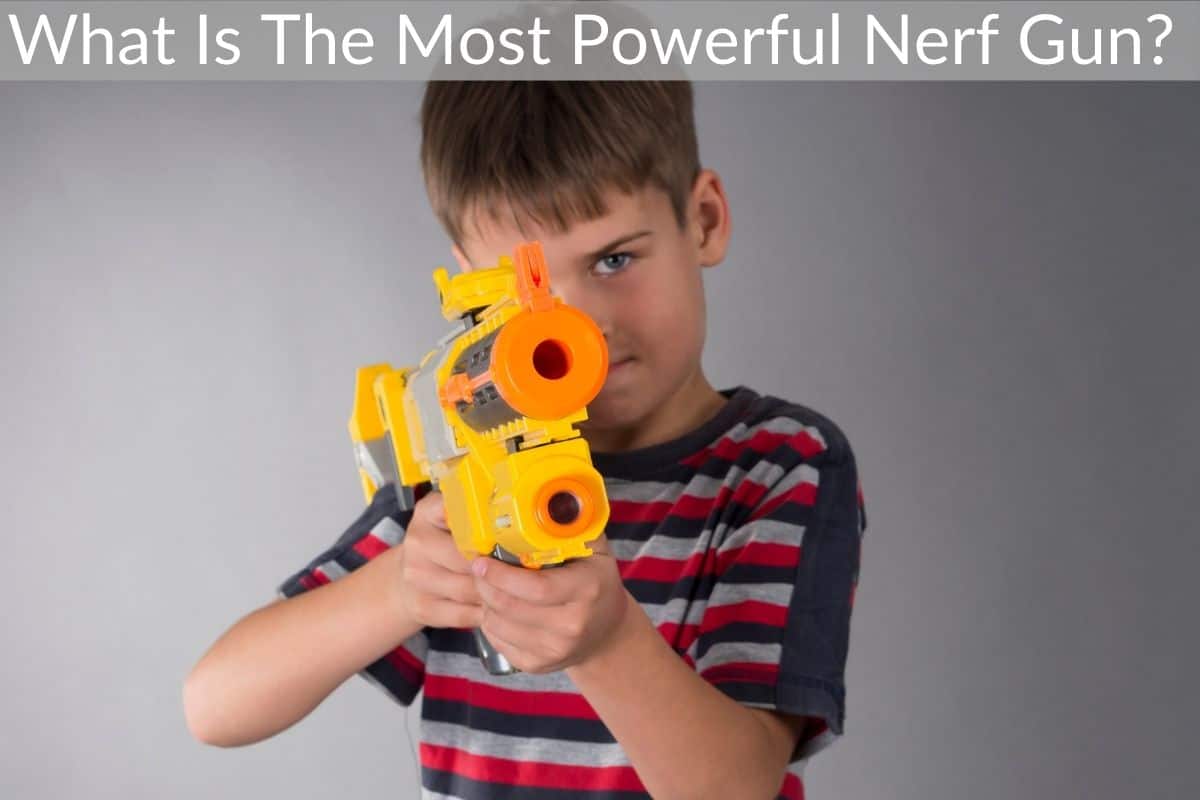 It is Saturday morning and you have the gang together for the ultimate Nerf War. Everyone is there for the sole purpose of becoming this year’s Nerf War champion.

You have been preparing for weeks, and you have purchased extra clips, darts, and other Nerf accessories when all of a sudden this hits you: what if you do not have the most powerful Nerf gun?

Will you now be left in vulnerable positions? Does this mean you will no longer be this year’s champion?

While each Nerf gun is powerful and unique in its own right the three most powerful ones are:

These three Nerf guns are currently the most powerful ones on the market right now but they each have their own pros and cons which I will go through next.

This Nerf gun is great for long-range assaults in your Nerf War. You can sit back and camp out far from the action and be declared the winner while being safe over 30 yards back. That’s right, this Nerf blaster can launch darts up to 33 yards away.

One of the reasons this blaster can fire the distance is due to the use of MEGA darts.

It is engineered to fire the Mega Whistler Darts faster and farther than other Nerf guns. What’s even better is that this monster of a Nerf gun comes with its own bipod stand giving the chance for better accuracy with every shot and six mega darts.

Also designed for long range assault, you can “snipe” your enemies from yards away. The A3700 Centurion Mega Blaster also uses the bigger Mega Whistler Darts allowing the darts to exit at a more powerful speed.

While your Nerf War enemies may not see you firing, they will be able to hear the whistle of your darts just before they are eliminated.

Otherwise, they are both powerful long-range Nerf blasters. The A3700 also comes with a bipod stand and six mega darts.

This Amazon exclusive will help you be declared the winner of Nerf Wars with its incredible power. The N-Strike Hyperfire is motorized and can be classified as the fastest-firing Nerf.

You will be first pick for Nerf War every time with this as your choice of Nerf gun.

While the N-Strike Hyperfire may only fire 30 yards away compared to the others at 33 yards, it won’t matter due to the fast firing speed of your darts and it comes with a 25-dart drum.

While the other long-range Nerf guns come with six darts and need constant reloading, you will be able to eliminate your opponents with your full drum of darts.

In the time it will take your opponents to reload, you will be able to shoot multiple darts as the Hyperfire is designed to fire up to 5 darts a second.

Since the Hyperfire is motorized, you will need D batteries in order to reign down darts on your opponents.

With many options of great Nerf guns from which to choose, these three are among the most powerful. The only decision left to make now is which long-range Nerf gun is best for you, and where will you set up camp to fire from?

With so many new and more powerful Nerf gun options out there and the always rising interest in them, is there cause for concern with how dangerous they are?

Just like most things in life, Nerf guns have the potential to become dangerous if not handled properly. The biggest concern for safety regarding Nerf guns is the darts if they are fired directly into someone’s face.

The darts are fired from the Nerf gun at great velocity but they are also so light that the wind can take it causing room for error in accuracy.

So with these powerfully propelled darts, how do you protect yourself from the darts flying in your face?

Make sure to purchase the proper darts

While a majority of the Nerf accessories are interchangeable, it is best to make 100% sure that they are interchangeable. Also, if you decided to buy extra darts and found a sale with a different brand, make sure they are suited for the particular Nerf gun.

The wrong darts can either jam the gun or end up being propelled very differently from a regular Nerf dart.

Some of the Nerf blasters have a kick back which could potentially end up hurting a smaller child. Also, there is quite a bit of speed and kick behind the darts being shot.

If these darts can leave bruises and make a grown adult whine a bit, it is not a great idea for a small child to be in the middle of that Nerf War.

Refrain from making your own modifications

While there are many tutorials out there that promote taking apart a Nerf gun, making modifications, and piecing it back together, this is not a great idea. It may have worked for the person creating the tutorial, but that does not mean that it will work well for you.

In addition, if something were to happen and break before you even had a chance to enjoy it, the return policy is voided.

While it may not look or feel cool to wear glasses at the time, it is definitely better than having to wear a patch for weeks after your Nerf War. You may even think, “Oh, it will never happen to me.” It is always better to err on the side of caution than to have regret later.

While Nerf guns do have the potential to be dangerous, as long as you are taking precautions and using Nerf‘s accessories, you should be able to have a great time and not worry about the dangers.

However, if something unfortunate were to happen and someone does get injured, make sure to seek immediate medical attention.