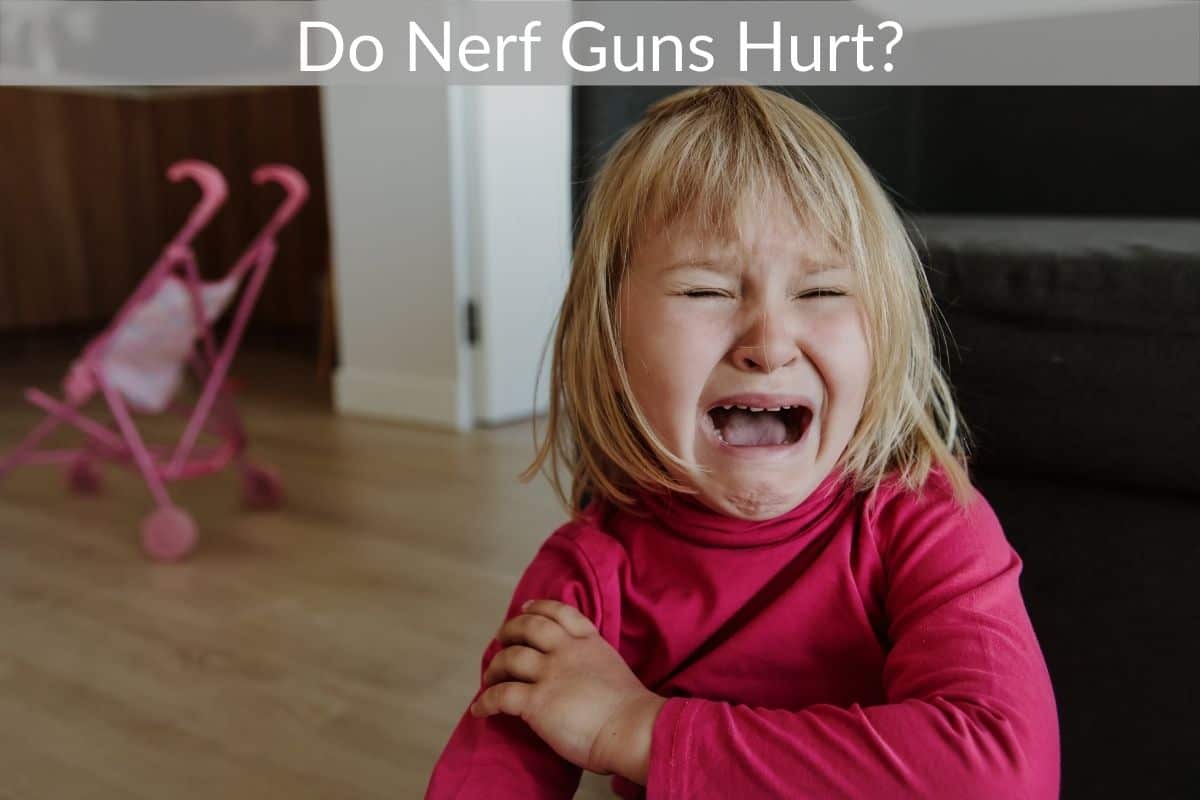 If you have ever started a Nerf war with your friends or family as the bullets whizzed by your head you may have wondered whether they would hurt a lot if they hit you rather than missed.

Unfortunately the answer isn’t as simple as you might hope as it does vary depending on what kind of Nerf gun you are using, what your pain tolerance is, and more.

Where were you hit? How close in range were you shot at by that Nerf bullet? There are so many different variables for this one question.

Although Nerf bullets might sting a tiny bit when they hit you, they are not shot hard enough to do any lasting damage since the darts are made of foam and rubber.

If you ever used a Nerf gun before, then you know they are tons of fun, and extremely popular. Of course, it’s always the thought that the bigger they are, the better they’ll work.

There’s the heart pounding moments of locking in your target as you try to keep every muscle still so as not to give away your position. Taking careful aim, you soon press the trigger as you watch the dart fly to its target.

You either have that moment of extreme elation as you hit your intended victim, or intense disappointment as you miss your mark. It’s a game of intense focus that produces great fun and enjoyment.

The main thought though, is does it hurt? Will you feel intense pain? Will you have to go to the hospital with a grave injury?

The majority of people would say no.

Let me explain a little further.

Nerf darts are made of foam with a small rubber end. That being said, not much power can come from a piece of foam. The darts quickly lose momentum, which will make the impact not as powerful.

However, there are warnings about not shooting at the other player’s face. Why? Because there are a lot of nerves in the face making it much more sensitive to pain.

To be safe, it is a good idea to wear goggles for your eyes so they are not accidentally hit. If you are very concerned about pain, wear long sleeves and jeans the first time you play with them to see for yourself your level of pain tolerance.

For most kids, it doesn’t faze them one bit. Nerf guns and darts are meant for kids to have fun and burn off some energy as they dive behind furniture or run up stairs to dodge the Nerf darts being shot their way!

Can A Nerf Gun Kill Someone?

If you’re reading this, you may have been told that you may kill someone by shooting a Nerf gun near them (likely a parent or grandparent exaggerating).

While it may be possible to bludgeon someone to death with a Nerf gun, it would take an extreme amount of force, with the intent to harm, and repeated action and using Nerf gun darts wouldn’t do it.

Nerf guns are not dangerous and absolutely will not kill someone as the darts are made out of foam and a small rubber end. Foam quickly loses its speed once shot and it also will dissipate its force once it has been dispensed from the gun.

Nerf guns are designed for kids to have fun and their designers made the guns to be innocent fun, not to cause harm.

With little foam darts that quickly lose momentum once fired, it’s virtually impossible to hurt someone by using a Nerf gun let alone kill them.

Now, if someone has modified their darts or guns, that was not the designers’ ideas. That was someone else.

There are stories of people replacing the rubber end of a dart for a thumbtack. That has great potential for harm but even then likely won’t kill someone.

If you have kids whose friends do this, you may need to have a talk with your kids about safety precautions or even about the type of friends they are with. But again, the original purpose behind the guns and darts is not to cause harm, but to have fun!

In other words, don’t modify or use the guns for a different purpose than what the designers intended.

Sure it may be cool to get your creative juices flowing, but just don’t try it on the Nerf guns and darts. That way you keep the game safe and pleasurable for all involved.

But is it possible to kill someone with a nerf gun with how it’s manufactured? No. With how they are made with foam and it’s small rubber end, they are not made to be able to kill.

Again, someone can remake the darts, but that’s not its original intent or ability.

We’ve all had the fear of flying objects coming rapidly at our face. Whether it’s small as sand in a desert area, leaves from a branch that’s low on the trunk on a windy day, or an object from a high shelf that we’re trying to reach that’s not firmly in our grasp, things that can cause harm are serious and valid concerns.

The eyes are very sensitive and extremely vital to our well being and hurting your eyes can cause temporary or possibly lifetime discomfort.

Finding ways to protect your eyes are valuable to our existence. Knowing what to do in case of an emergency is also practical to know.

According to the Village Eye Doctors, you need to pay attention to your symptoms if you are hit in the eye or around the eye with any flying object. If you have bleeding in your eye, fuzzy vision, seeing black or starbursts, pain or any other uncomfortable symptoms, these are all warning signs that you are at risk for future vision loss.

Go to an eye doctor immediately to get an eye exam.

Being shot in the eye can lead to detached retina, or even put you at risk of developing glaucoma.

Wear goggles when playing with Nerf guns to protect yourself from the stray darts that can hit a sensitive area. Eye doctors strongly recommend using caution with any flying objects. Also make sure you follow the age limits that are placed with the Nerf guns.

That is to make sure that they are hopefully mature enough to follow directions for caution and safe play.

Which Is The Best Nerf Gun?

There can be quite a bit of competition between the size of a Nerf gun and what its features are. You have the size to think of, it’s durability, it’s ease of use, and the special features that can be a part of a gun.

There are also parental thoughts as well to be considered such as the recommended ages, it’s packaging, and if batteries are needed.

Bragging rights among children concerning who has the best gun are often a different aspect to consider.

Here are a few different guns to consider as of this writing. I will let you know it’s score from the Bestreviews.guide and its special features. Plus if there’s any pertinent information for a parent.

According to Bestreviews.guide, scoring a 9.9 is the Nerf N Strike Elite Strongarm Toy Blaster with Rotating Barrel and Slam Fire.

This Nerf gun is designed for ages 8+ and can blast between 75-90 feet in range. It’s design is for easy loading and can rapidly fire 6 darts at once.

It doesn’t need batteries. Also on the plus side for a parent, it’s with frustration-free packaging!

With a score of a 9.2 from Bestreviews.guide is the NERF Megalodon N-Strike Mega Toy Blaster with 20 Official Mega Whistler Darts.

It reminds me of a machine gun as it has a rotating drum that can hold up to 20 darts. It is a red gun with an orange drum and can shoot up to 85 feet, and the blaster comes with 20 big red Official Nerf Mega

Whistler darts make a whistling sound as they are soaring to their target through the air! You do have to crank the handle back and forth to shoot the darts. You can also fire all 20 darts with the slam-fire action if you hold the trigger down and then crank the handle.