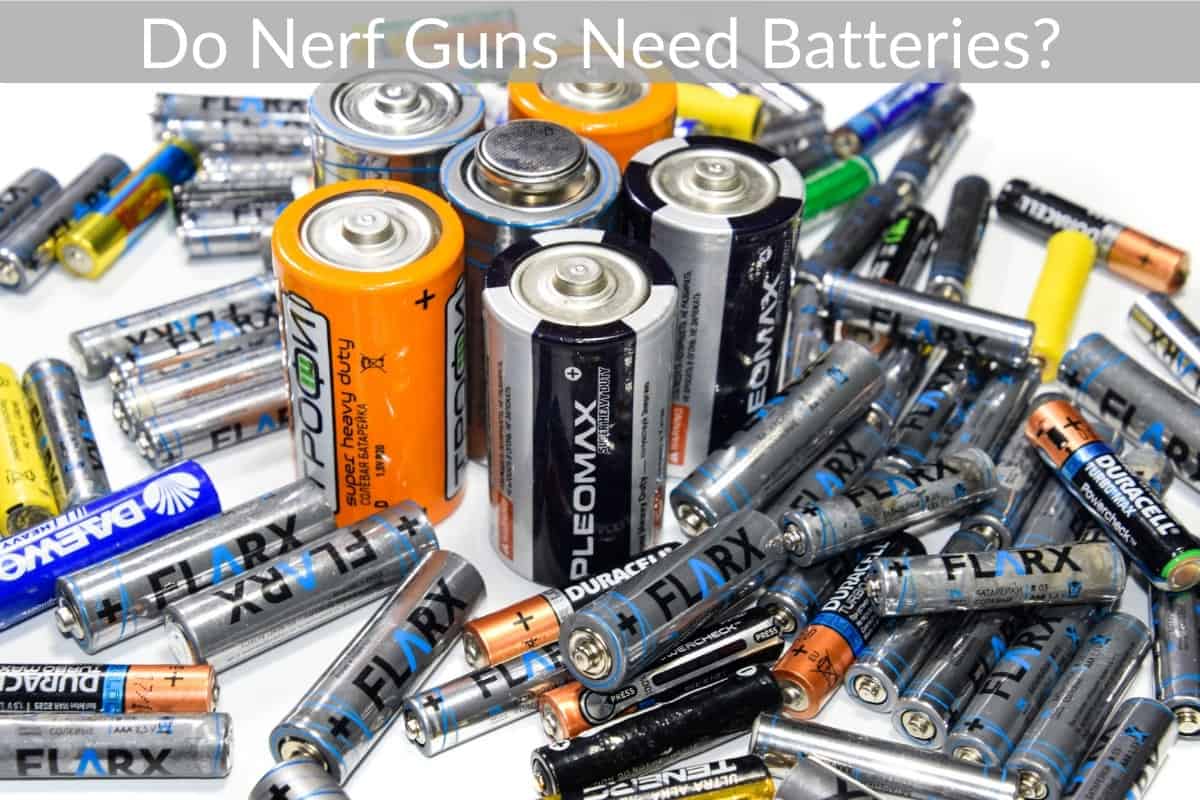 Who doesn’t love a good Nerf war? No matter your age, Nerf guns always seem to bring a smile to one’s face and laughter among friends.

Although most Nerf guns don’t require batteries there are quite a lot that actually do. I mean, what makes shooting foam darts at your friends even more fun when there’s no need to reload every time you want to fire?

Even though some Nerf guns don’t need batteries, if you want to be in possession of the best toy weapon in the battle, a battery operated one would be the way to go! Some battery powered Nerf guns fire rapid shots while others shoot further than any normal Nerf gun can.

There are two basic types of these fantastic little toys.

Automatic, which only requires holding down the trigger and semi-automatic, which involves pressing the trigger each time you want to take a shot. No more cocking the gun in the middle of war, or instant reloading while searching for more ammo and getting shot in the process.

To get the most out of your epic experience go for a fully automatic Nerf gun. These not only shoot faster and further than manual guns but rapid fire several rounds of bullets!

When your ammo runs low just pick up some fallen darts from the ground and keep on fighting.

Another thing I want to mention is that the design aspect is pretty cool. You can have you pick from sleek and light to big and bold! Many have extra storage that makes it easier to reload quickly while others feature a scope for accuracy.

There are many different options you can choose from.

While there is a good selection of manual and automatic nerf guns, many people think that most Nerf guns don’t require batteries to use them…but that would be wrong!

Some of the most popular Nerf guns depend upon batteries to operate to their fullest potential. Automatic and semi-automatic Nerf guns require them for use and that’s what makes them the best on the battlefield.

After purchasing a new Nerf gun have you been surprised to discover that you needed to take an extra trip to the store to get some batteries? It may seem inconvenient at the time but trust me, it will be worth it when you have the prime weapon the next time you’re out playing in a Nerf war.

By understanding which Nerf guns need some extra charge you will be ready the next time you buy one.

Below is a list of some of the Nerf guns models that need batteries and which batteries that they use:

Now that we have explored the Nerf blasters that need batteries, let’s take a look into a few of the Nerf models that don’t.

These aren’t necessarily a bad option for play since they will be more age appropriate for smaller children.

The Nerf N Strike Elite seem to be the top picks for the non-battery version of this toy.

These non-battery Nerf guns are:

Like I said, if you want to have an all-out Nerf war, by all means get the big guns but if your kids are a bit young for that there are still some great options.

Which Nerf Guns Are Fully Automatic?

As I mentioned earlier, some Nerf guns are fully automatic. These are perfect for the fastest possible shots (although not the most accurate) you want when playing in a Nerf war with your friends.

Automatic Nerf guns come in all shapes and sizes but it’s this that makes them powerful in different ways.

The most popular automatic Nerf guns are:

The complete list of fully automatic Nerf guns can be found here.

Fun times await anyone who owns any of these amazing toys! But parents may need to advise their children that to be safe, there may be times they need to wear eye protection to protect that eagle eye.

What Are The Best Batteries For Nerf Guns?

Well, we know now that we need batteries for our toy Nerf guns but what kind? We want something that isn’t going to run out of charge right in the middle of the fun and something that will keep your ammo firing fast.

The best batteries for Nerf guns are rechargeable and they even make the gun a little lighter to carry with you. Each Nerf gun requires different sizes of batteries so make sure you look at the manual to see what size your Nerf gun needs.

Even though rechargeable batteries may be more expensive originally they will certainly last longer and will save you tons of money in the long run.

The best brands to purchase for your toy would be Duracell, Energizer, Ansmann, BPI-NI-ZI, and Memorex. Although if you prefer a certain kind that works for you then you can just stick to using what you already love.

As far as the type of battery, I would suggest using rechargeable batteries as mentioned above.

So, in conclusion, yes, some Nerf guns do need batteries. Most of those that use batteries are fully automatic with some really cool features.

You may also even need certain batteries for your Nerf gun but in general rechargeable ones are the best.

What is important however is that whether you are an experienced Nerf gun user or just a beginner, everyone can enjoy playing with this timeless toy.

Choose a Nerf gun that displays your own unique style and there are endless possibilities to the fun you will have!