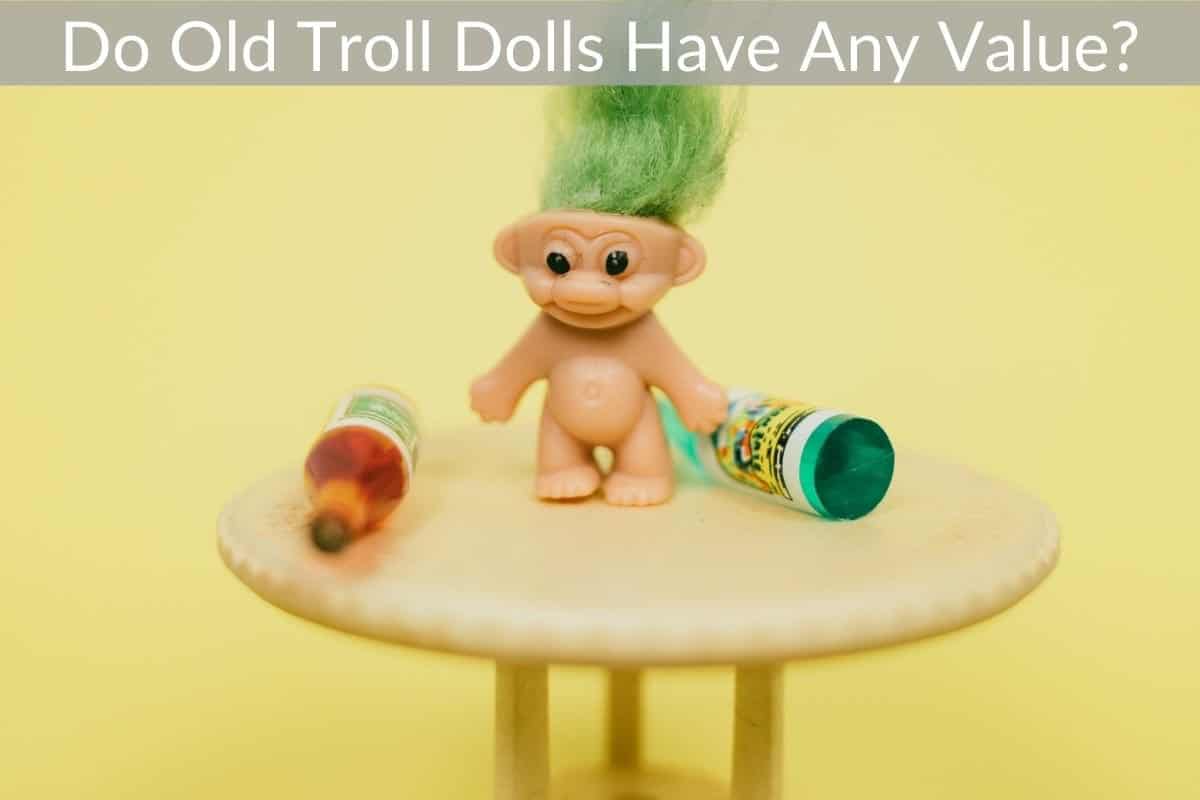 They are cuter now than they were in the 60s. The wrinkled face Troll dolls were considered good luck when they were created in Denmark in 1959 by Thomas Dam, who carved the doll for his daughter.

They became popularly known as Dam (pronounced “dahm”) dolls and were sold in plastic under Good Luck Trolls. Today, they are popular kids toys as well as those well-known movies.

Troll dolls have made a comeback in the last couple years with the Dreamworks animated movies featuring the crazy haired and colorful creatures. Newly made Troll dolls aren’t worth much but rare and vintage Troll dolls can cost a lot of money if they are in good condition. We will talk about how much they are worth later on in this article.

Dreamworks animation studios now own the furring haired Trolls brand and Hasbro toy company sells the Troll dolls. Many companies created their own versions over the years as the toys became popular but distinctive details of the Dam dolls are still identifiable.

What Is The Most Valuable Troll Doll?

Now to talk about what these funny faced dolls can be worth. If you have saved these timeless toys from your childhood then you may be in luck as they can certainly be valuable.

As mentioned earlier it all depends on their rarity and if they are of the very first ones to be made. Being the first company to sell Troll dolls, Dam dolls are worth the most.

The most valuable troll doll is the Dam Limited Edition Troll which in excellent condition sold for $700.

To name a few of the most valuable of troll dolls, lets begin with this list:

These cute kids toys have come a long way since they were first created. Fashioned after an ugly troll but less scary, Troll dolls have grown cuter over the years and were even thought to be good luck.

The first woman pilot to fly solo across the Pacific, Betty Miller, brought her Troll doll along on the flight as a good luck charm. Betty and her doll were welcomed to the White House in 1963.

Which Vintage Trolls Are Worth Money?

Vintage Troll dolls are worth something and if in pristine condition can be valued at hundreds of dollars.

They are recognizable anywhere with their up combed locks and weird yet friendly facial features.

Most vintage Troll dolls are worth money but the real value comes from the condition they are in. Troll doll animals, or troll dolls in a smaller size tend to be more valuable than the normal dolls.

Here is another list of the Troll toys and you’ll notice these are all from the original creative company:

If looking to collect these toys, as mentioned, Dam dolls sell for greater prices. It’s also important to know that the smaller ones are worth more as well as the animals.

How Do You Identify A Dam Troll Doll?

If you know you have a stash of the favorite childhood toys from the 60s packed in a box somewhere, you might want to go check out if any are on the most valuable list. Valuable Troll dolls are easy to spot if you know what to look for.

You will need to look for a few special things that only a true Dam troll doll would have. These things include a Dam stamp, deep wrinkles, size of the Troll, and more.

The first thing a Dam doll would have is a stamp on the bottom of its foot, on the back, or belly. Their features are very noticeable to collectors.

Sometimes the fact that it is an animal is a good sign you are holding an original Troll doll. Sometimes though, they were made without these stamps. If this is the case you will need to look at the body. Is it long and large?

All Dam dolls have defining details such as wrinkles and unruly hair. They also do not have conspicuous seams from manufacturing. There may be an original Troll doll that does but it is unlikely and cheaper copy-cats have obvious seams.

By knowing what a real Troll doll looks like you may be able to identify if you own one of the rare and timeless toys. If so, you could have something very valuable.

Collectors value vintage Trolls very highly with the original Dam dolls being the most expensive.

Thanks to Dreamworks animation, Troll dolls have made a comeback recently. From the first Troll doll carved out of wood to the new and popular plastic dolls, it seems their funny features and brightly colored, tall standing hair will never go out of style.